By the Way, Meet Vera Stark A Tribute To The Women Who Paved The Way 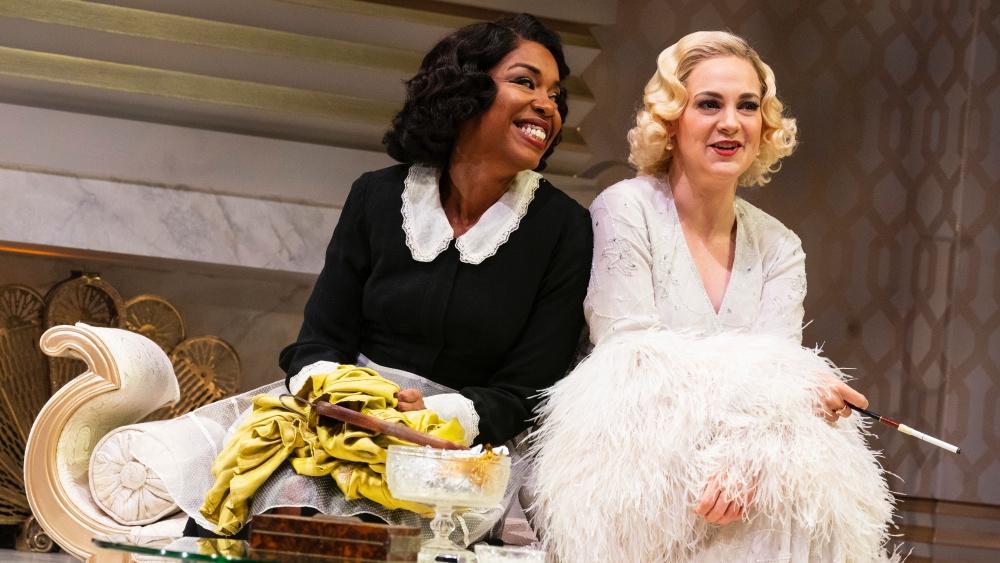 By the Way, Meet Vera Stark A Tribute To The Women Who Paved The Way

These are slaves with lines!﻿

I missed Lynn Nottage’s By the Way, Meet Vera Stark the first time around, so I was thrilled when the Signature Theatre decided to revive it, even if it’s premier was eight years ago. Set in 1933, we first meet Vera Stark (Jessica Frances Dukes), a maid to her longtime friend Gloria Mitchell (Jenni Barber), a starlet, who has gained a little weight, is self obsessed and is the epitome of a dumb blonde. Vera is trying to help Gloria learn her lines to read for a new Hollywood southern epic that has roles for people of color. Vera has asked Gloria to help her get an audition. Vera has asked dreams of acting, but roles are far and few between and she has sworn she’d never play a slave. At the rooming house her friend Lottie (Heather Alicia Simms) when she hears about it, wants to audition, as does and Anna Mae (Carra Patterson), also a person of color who pretends to be Brazilian to get more work in the film industry. When Gloria throws a party where the director (Manoel Feliciano) and producer (David Turner) attend and the maids/actress act the way society sees them to obtain roles. As typical of Hollywood, the scene shows what people were willing to do to be in the movies.

Act two allows us to see the 1933 film that was made The Belle of New Orleans. Cast is Gloria as the lead the dying octoroon, Anna Mae as a Frenchwoman, Lottie as a slave, and Vera as Tilly, the dying heroine’s maid and confidante. As we skip forward in time to 2003, we are at a symposium led by Oakland” Herb Forrester (Warren Miller) on Vera’s long Hollywood career. Everyone wants to know what happened to Vera Stark. The guests of the lecture include journalist, poet and performer Afua Assata Ejobo (Patterson) and media/gender studies professor Carmen Levy-Green (Simms). As we watch a 1973 talk show the now alcoholic Vera is there to plug her Vegas nightclub act, but Gloria (Turner) has decided to upstage her and stage a reunion. Vera is not amused. In the end we see the compromises she has made. She and others like her paved the way for the black actress today. She may have played the maid but she made her mark.

Ms. Dukes as Vera lights up the stage, you can see how she was destined to be a light for other and you can see how she paved the way. We root for her Vera and when she lose that piece of herself we mourn. I wished I had a chance to see Stephanie J. Block in the role of Gloria. Though Ms. Barber is fine in the role I would have liked to have seen more layers. Ms. Simms shines in both acts, as does Ms. Patterson. The men are under used but I absolutely loved Mr. Feliciano as Peter Rhys Davies.

The direction by Kamilah Forbes could have used a lighter touch. This show should have been a lot funnier, though I did enjoy it.

Ms. Nottage’s play has a lot to say and I really enjoyed her play on words. This play is deeper than you think if you listen to what is not said. Bravo Ms. Nottage it takes a smart playwright to know that.

I am just sorry I saw this the night before it closed, so I could tell people to see this.