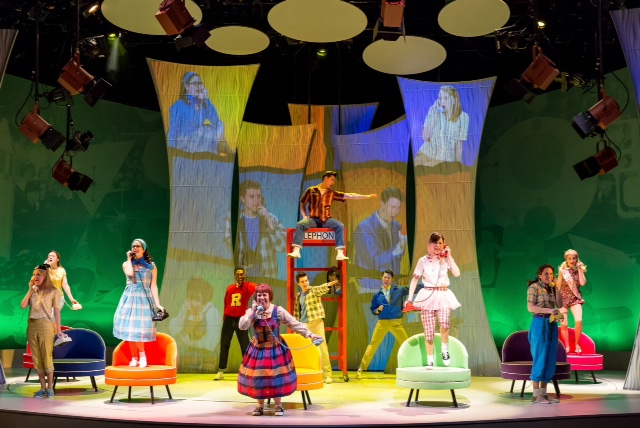 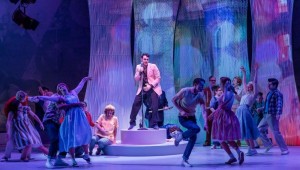 Set in the late 1950’s, the Drury Lane theater is all poodle skirts and ponytails for the opening of their latest musical, Bye Bye Birdie, the thinly veiled tribute to the time when Elvis Presley left the pop charts, at the height of his success, to join the Army. Directed and choreographed with aplomb by Tammy Mader, this charming walk down memory lane will please those nostalgic for a simpler time. Every phone had a curled cord firmly secured to the wall, and every teen had a 10 pm curfew they happily accommodated. The small town values of 1959 taking center stage in this four time Tony Award-winner. All intact, the book by Michael Stewart, music written by Charles Strouse and familiar lyrics scribed by Lee Adams, Bye Bye Birdie is a sure fire hit for the regular Drury Lane patrons. While elements of Birdie may feel dated, pop culture media manipulation is as topical today as it was back then. Just ask the spin doctors working overtime for current troubled teen singing sensations Justin Bieber and One Direction. The “squeaky clean teen dreams” of today, behind their glossy magazine pin-ups and strategically staged photo-op’s, definitely have a darker underbelly a team of press agents work feverishly to cover up. 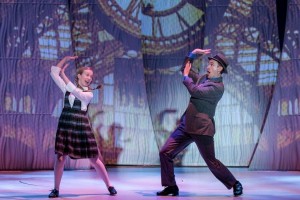 The story here centers around a tightly wound talent agent, Albert Peterson (Matt Crowle) and his assistant, Rosie Alvarez (Michelle Aravena) the creative players behind Elvis inspired teen-aged heart throb, Conrad Birdie, played with gusto by Jason Michael Evans. The young, hip shaking rebel definitely has a cause, he has signed up to join the armed forces. Hoping to squeeze one more hit record out of him before their cash cow is shipped overseas, Albert and Rosie concoct a contest that will land them a crucial spot on the most important prime time television program of the time, the Ed Sullivan show.  The ruse, they will arrange for Conrad to give “One Last Kiss” to his biggest fan, small town teen, Kim MacAfee (Leryn Turlington) from Middle America Sweet Apple, Ohio. This kiss may be a great public relations ploy, but it is a big problem for Kim’s new boyfriend, Hugo (Ryan Stajmiger) and her overbearing Father, Harry (George A.Wolff).  Meanwhile, Rosie has a second, not so secretive agenda. She longs for the simpler life of being “An English Teacher’s Wife” and gives Albert an ultimatum. Chose her as a bride and settle down with a suburban life teaching at the University, or continue in showbiz and she walks out of his life, forever. Albert’s long suffering mother, Mae (Catherine Smitko) is his not-so-silent business partner who believes Rosie is both far too old and far too ethnic to be a suitable spouse for her son. In today’s world, her racist banter would have her a frontrunner in the GOP Elections, but here she is used primarily for laughs. Also providing serious giggles, Stephanie Hansen as over-the-top, Conrad obsessed teen fan, Ursula. Hansen is a megawatt, scene-stealing, pleasure, and a delight every time she walks on stage. 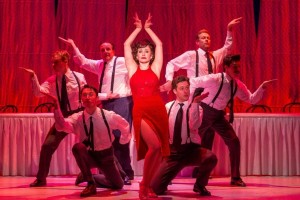 The real appeal here are the numerous production numbers. The clever staging on “Telephone Hour” impressed as a dozen teens hoped, squatted and posed on a series of chairs arranged on Christopher Ash’s circular, rotating set. Designed like a television set inside a television set, the harmonious songs, effervescent colors, aided by Sharon Sach’s vibrant costuming, pop right before your very eyes.  The charm of “How Lovely To Be a Woman,” “Put On a Happy Face,” and “Kids,” under the music direction of Alan Bukowiecki, still firmly intact. The MVP of the cast, Michelle Aravena, whose Rosie dominated “What Did I Ever See In Him,” sizzled during a sexy “Spanish Rose,” and astounded during the inventive “Shriner’s Ballet” where a team of fez wearing Shriners proved no match for the flexible temptress. The moment Aravena does the splits and then is glided, awkwardly, across the entire stage, crossing over the laps of almost a dozen male troupe members, was both outrageously hysterical and physically impressive. Aravena won a Jeff Award for her role in West Side Story last year, also produced at the Drury, and is most deserving of a repeat nomination for her fancy footwork, gloriously on display here too. 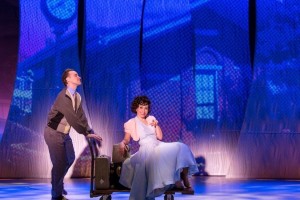 On the surface, Bye Bye Birdie is a throw back musical to long gone era, romanticized by the rose colored glasses of nostalgia. For that, this show will delight the regular season ticket holders. With the similar looking Hairspray now playing not so far away at the Paramount Theatre in Aurora, the suburbs offer two very different takes on life I the late 1950’s. For those looking for a more prosaic take, Bye Bye Birdie will be right up your alley.