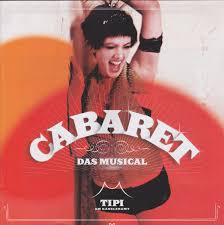 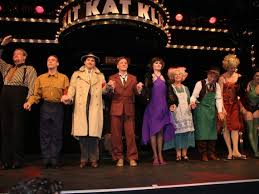 To be in Berlin and see Cabaret the Musical performed in German (Cabaret das Musical) with only a smattering of English words and lyrics was… hot. Yeah it was 105 in the shade at sunset with only my paper Nefertiti souvenir fan to stir the air, but inside the tented theater at the Tipi Am Kanzleramt near the Chancellor’s office, there was a different kind of heat- anticipation. A mosaic hourglass figure Wilkommened us off of the classy patio serving pureed tomato soup and champagne, into The Kit Kat nightclub of 1929’s pre-war Berlin. A sexy Frauline took our tickets and gestured “right this way, you’re table’s waiting”. 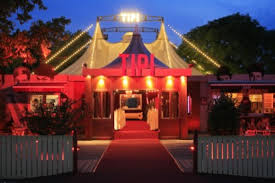 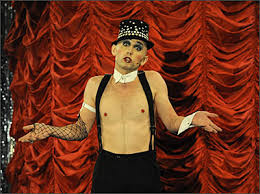 Four Kit Kat girls and boys (and girl/boys) ground their way through choreography by the American Director/Choreographer Vincent Paterson, famous for Madonna’s “Blonde Ambition Tour” and as the opposing gang member who threatened Michael Jackson with a knife in the “Beat It” video.

As the true story based on the novel “Goodbye to Berlin” goes, writer Christopher Isherwood (renamed Clifford Bradshaw- a distant relative of Carrie?) came to Berlin for inspiration to write his new novel. Actor Guido Kleineidam brought a beautifully open depth of emotion to Bradshaw, who gets invited on New Year’s Eve to the Kit Kat Club.

Having secured shelter in the Berlin district of Schöneberg at the busy guesthouse of Fraulein Schneider, (played by the grand Regina Lemnitz, whom Europeans may recognize as the voice dub for Whoopi Goldberg and Cathy Bates), destiny intervenes when Bradshaw meets the wayward English singer Frauline Sally Bowles. Bowles, the brilliantly talented Franziska Lessing, deftly maneuvers her way into moving in with Bradshaw the very next day despite his protestations.

As she begins her love affair with Bradshaw, (Bowlshaw?), her powerfully hopeful rendition of “Maybe This Time” parallels the sweet tale of Herr Schultz, the friendly Jewish fruit merchant, played by feisty Peter Kock, who is in love with Fraulein Schneider. Also a tenant in her guesthouse, he loves spoiling her with pineapples and other exotic fruit. The fairytale of their charmed senior romance is suddenly shattered when the impending Nazi movement forbids their dreams of a marital union. Fraulein Schneider’s devastating heartbreak was beautifully measured by Lemnitz, as Herr Schultz is forced to leave Berlin in an attempt to save his life.

Sensing the turn of the tides into fascism, Bradshaw makes plans to leave Germany with his now-pregnant girlfriend Bowles. Left with the reality of his impending departure, uninterested in politics and unable to pull herself away from the seeming respite and lure of the timeless Kit Kat club, Bowles makes the heart wrenching decision to sell her fur coat in order to abort their child and stay in Berlin. Lessing was penetratingly beautiful as she staggered drunkenly onto the stage to angrily croon “Mein Herr” as Bradshaw leaves Berlin, beginning to write his memoirs on the magnificent train that brought him there.

The shenanigans in the guesthouse should have been trumped by the sultriness of what transpired at the Kit Kat Club, however it felt austere. Director Patterson seemed to have relied on the brilliant acting and singing by the leads to carry the show, but the powerfully sexy host in his studded, flack jacket couldn’t be expected to carry the hotness expected of the entire cabaret on his own. The raucous and talented band led by Adam Benzwi had one playful gentleman in sock garters and heels while the rest looked like they had been called to the stage before they were finished dressing. Pairing faded choreography with only four chastely costumed dancing girls versus the normal six, (with one being a very tall, amusing drag queen doing his best to keep up), the illicit, smoky, underground atmosphere found in modern day cabaret clubs in Berlin such as the Prinzipal, Kreuzberg and Trixie Trainwreck’s Burlesque Show at The Bassy Club, was never quite achieved.

As the tented classic show ground to a close, the Conférencier left us singing the reminder that there is “No sense in sitting alone in your room, come hear the music play… life is a cabaret old chum. Come to the Cabaret”!