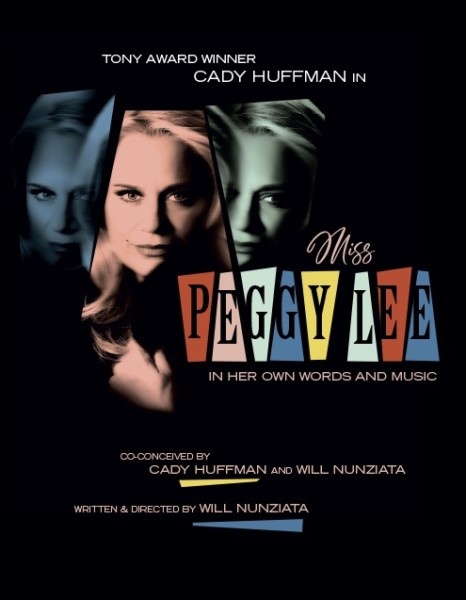 Broadway’s newest intimate concert venue – will present the premiere of Tony Award winner Cady Huffman in Miss Peggy Lee: In Her Own Words and Music for two performances only, Monday, June 10 and Wednesday, June 12. In a brand-new show long-time collaborators Cady Huffman and Will Nunziata lovingly bring to life Miss ‪Lee’s extraordinary journey from her humble beginnings as Norma Deloris Egstrom of Jamestown, North Dakota to becoming one of the biggest stars the music world has ever seen. Backed by a swinging four-piece band led by musical director Eugene Gwozdz, songs include “Fever,” “I Love Being Here With You,” “I Don’t Know Enough About You,” “It’s A Good Day,” “Here’s To You,” and many more.

Cady Huffman is perhaps best known for her Tony, Drama Desk and Outer Critics Circle Award winning performance as “Ulla” in The Producers on Broadway opposite Nathan Lane and Matthew Broderick. This led to her unforgettable recurring role on HBO’s “Curb Your Enthusiasm” where she almost became Larry David’s 10th anniversary present. This success also brought her to the Food Network’s kitchen stadium where she judged for 10 consecutive seasons on “Iron Chef America.” Cady’s other Broadway credits are her Tony-nominated performance as “Ziegfeld’s Favorite” in The Will Rogers Follies, her Outer Critics Circle Award-nominated performance as “Sylvie” in The Nance, the original productions of La Cage Aux Folles, Chicago, Steel Pier, Dame Edna: The Royal Tour, and Bob Fosse’s last original musical Big Deal. She has had several guest starring appearances on television, including recurring roles on “The Good Wife” and “Blue Bloods,” “Younger,” “Madam Secretary,” “Master of None,” “Difficult People,” “Law & Order: SVU,” “Law & Order: CI,” “Law & Order: Trial By Jury,” “Frasier,” and “Mad About You.” Cady is currently nominated for an Emmy Award for her work on the digital series “After Forever,” for which she won the 2018 IAWT Award. She created and stars in her own digital series titled “Cady Did,” which will be released soon. She is directing The Curious Incident of the Dog in the Night-Timeat Weathervane Theater this summer. @CadyHuffman CadyDid.tv

Will Nunziata is a New York City based director. The concert director for Platinum recording artist Jackie Evancho and Tony Award-winner Lillias White, he recently conceived and directed the critically-acclaimed off-Broadway theatre revue Our Guy, Cy: The Songs of Cy Coleman, starring four Tony Award winners who all worked with the late-great composer Cy Coleman – Lillias White, Cady Huffman, Randy Graff, and Judy Kaye. Will is currently working with the estate of world-renowned singer and songwriter Charles Aznavour on conceiving and directing an original musical around Aznavour’s robust canon of songs. He is also working with Grammy, Emmy, and Oscar-winning songwriters Alan & Marilyn Bergman on an original theatrical concert of their songs. A few years ago, Will collaborated with John Kander and directed a revised version of the Kander & Ebb musical The Act starring Julia Murney, Randy Graff, Cady Huffman, Anna Chlumsky, Mamie Parris, Stacie Bono, and more. Will graduated from Boston College with a B.A. in Theatre, and is also a professional singer and entertainer who recently headlined Carnegie Hall with the New York Pops alongside his twin brother, Anthony. www.willnunziata.com

Cady Huffman in Miss Peggy Lee: In Her Own Words and Music will be performed at The Green Room 42 (570 Tenth Avenue at 42nd Street, on the 4th Floor of Yotel) for two performances only, Monday, June 10 and Wednesday, June 12, both at 7:00 PM. The cover changes is $35-$75. There is no food and drink minimum. For tickets, please visit www.TheGreenRoom42.com.

THE GREEN ROOM 42 recently celebrated its two-year anniversary as the theater district’s premiere destination for live music, nightclub performances and special events. The space lets audiences experience shows featuring Broadway’s biggest names and emerging talent up close and personal like no other space in the world. During the shows, guests can enjoy Mediterranean-inspired dishes alongside signature cocktails, craft beer and curated wine lists with no food/drink minimum. Tickets can be purchased at www.TheGreenRoom42.com. The Green Room 42 is located at 570 Tenth Avenue inside YOTEL in New York City; @TheGreenRoom42

Related ItemsEugene GwozdzMiss Peggy Lee: In Her Own Words and MusicNewPeggy LeeTHE GREEN ROOM 42Will Nunziata