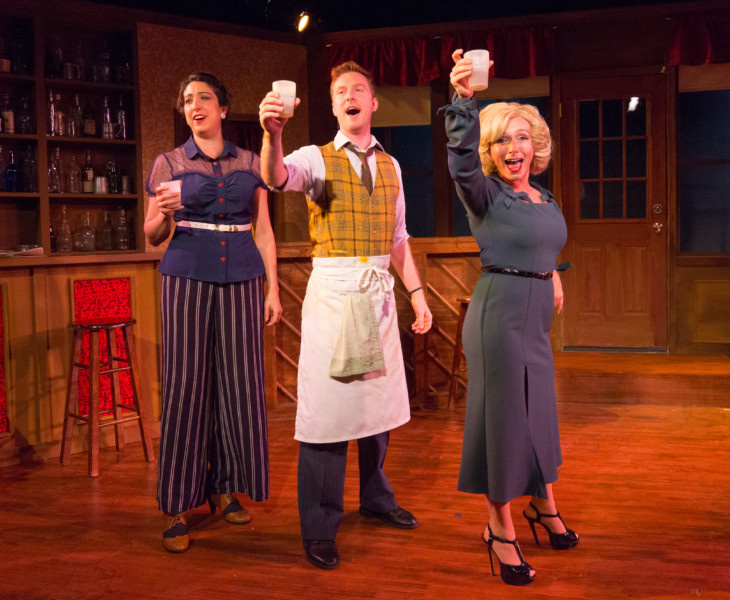 This musical pastiche was done previously at Act II Playhouse, the Arden Theatre Company, Horizon Theatre in Atlanta and City Theatre in Pittsburgh. The music and lyrics by Michael Ogborn are in the cabaret style.  There are songs as disparate as “My Mother’s Frying Pan”, “Oh, How I Miss the Kaiser”, “Rasputin and the Russian Nun” and “Ou Après la Guerre”

Mr. Ogborn’s most successful songs seem to be his ballads which are melodic and very heartfelt. The plot line which seems to consist of no more than two prostitutes burying the hatchet before one goes off to be wed is rather unsatisfying.  So the bulk of the evening relies upon the jokes and hardcore limericks that for me fell flat.  What makes the evening entertaining is the talented and hardworking cast.

April Woodall is remarkable as The Baroness.  From her exquisite German accent to her spot on comic timing, she is worth the price of admission. Completely adorable is Jessica Riloff as The Duchess. Zachary J. Chiero keeps the whole evening rolling along as the energetic, charming Owner, and Eileen Cella as The Wife gets to show off a beautiful soprano voice.

Mention should be made of Musical Director and Accompanist Dan Matarazzo who never stops playing the entire evening and of Dirk Durosette whose set is quite stunning.

Suzanna BowlingNovember 8, 2022
Read More
Scroll for more
Tap
The 75th Annual Theatre World Awards: The Red Carpet
Want to Know All About All About Theatre Festivals?