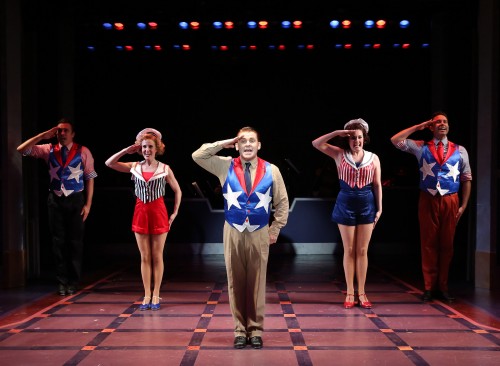 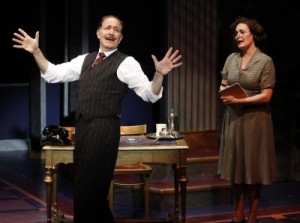 Cagney the new Americana song-and-dance musical about James Cagney is like a poor man’s George M. It was wonderful to hear the story about how Cagney paid for the defense of the Scottsboro Boys, but there was less information and more original songs, that are in a word, forgettable. Twenty-four of them including reprises that all sounded the same. Maybe if Robert Creighton who also co-wrote the score was less razzmatazz and more real, I would have been more engaged. It’s not that Mr. Creighton isn’t talented, he is. He can sing, he can act and he can dance, he just lacks that quality that makes us want to follow him on his journey and care.

When a show is two and 1/2 hours long you need an engaging book but Mr. Colley’s says nothing new or interesting. Only the segments where Jack Warner (Bruce Sabath), mentally tortures the deminutive actor and when the the House Un-American Activities Committee accuse’s Cagney of being a communist, at least have bite. The best songs of the show are “Black and White,” the reprised version in Act 2, “Action” sung by Jack Warner and “Tough Guy,” though the later needed a stronger singer.

Joshua Bergasse’s (Smash, On the Town, Gigi) choreography, on the standards “You’re a Grand Old Flag” and “Over There,” are well done. His tapping choreography is red, white and blue. Matt Perri’s musical direction keeps the cast singing in perfect harmony. Bill Castellino’s direction does well on the York Theatre stage. As always James Morgan’s set is perfection.

The cast is on par though Bette Davis, Greta Garbo, Errol Flynn and Bob Hope they are not.

I can see this show playing regionally and doing well.

Suzanna BowlingJanuary 16, 2022
Read More
Scroll for more
Tap
Steven Carl McCasland a Playwright to Watch
God is Anemic in An Act of God