Cagney Wins Over This Critic

Cagney Wins Over This Critic 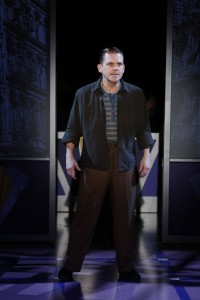 It is amazing that a show that was mediocre, can improve with time and experience. Thus is the case of Cagney opening tonight at Westside Theatre. When I first saw the show at The York theatre, Robert Creighton the star and the composer/lyricist was like an energizer bunny on steroids. Ironically the best song in the show “Tough Guy,” was beyond his singing capabilities. Turns out the song was written by composer/lyricist /arranger Christopher McGovern. Since The York, Creighton has found his balance between energy and creating a solid character we care about. Now “Tough Guy” is one of the best moments in the show. Director Bill Castellino’s has honed the dramatic moments and now the brilliant hoofer chorography by the talented Joshua Bergasse shines. 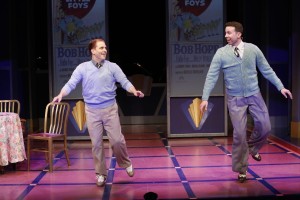 For those who love James Cagney, now you can get the in depth scoop of the man behind the mobster and song and dance man the world loved. Find out how John Barrymore asking for more money and coming to New York to star in a rather poorly reviewed Hamlet, gave Cagney his start. See how Jack Warner (Bruce Sabath) of Warner Bros decided how his career would go. How the McCarthy hearings tried to destroy him and how Bob Hope (Jeremy Benton) was always by his side. 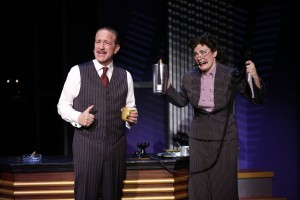 This is obviously a star vehicle for Creighton, who does make an impression. He can sing like an Irish tenor, dances with ease and now wins us over with his presence. I would love to see more of the stalwart Mr. Sabath. I looked forward to his every moment on stage. Mr. Benton also has some fine moments, as does Danette Holden and Ellen Zolezzi who are perfect as the women in his life. Only Josh Walden makes an unfavorable impression. As Cagney’s brother he is excellent but when he is a song and dance man though he sings and acts to par, his presence is back to the annoying “hey kids let’s put on a show.” It is important to add that this is the same cast, director and choreographer and set designer (the terrific James Morgan who is also the artistic director at The York).

Peter Colley’s book needs to draw a little bit more about the man such as the fact Cagney sued Warner for breach of contract and won. He also served two years as the president of the Screen Actors Guild. The last one is a little more important because the show is bookended at the SAG awards presentation, so a mention of that would have been appropriate.

As for the score “A Work of Genius,”“Warner at Work,” “Action (Whit Heat)” and the aforementioned “Tough Guy” are really interesting pieces.

Bravo to the cast, crew and producers; you took a show; I was not really anxious to see again and made me enjoy a night out at the theatre. From the beginning to the end this was a show that grew on my guest and me. For a good old fashion enjoyable time Cagney is a Yankee Doodle Dandy.