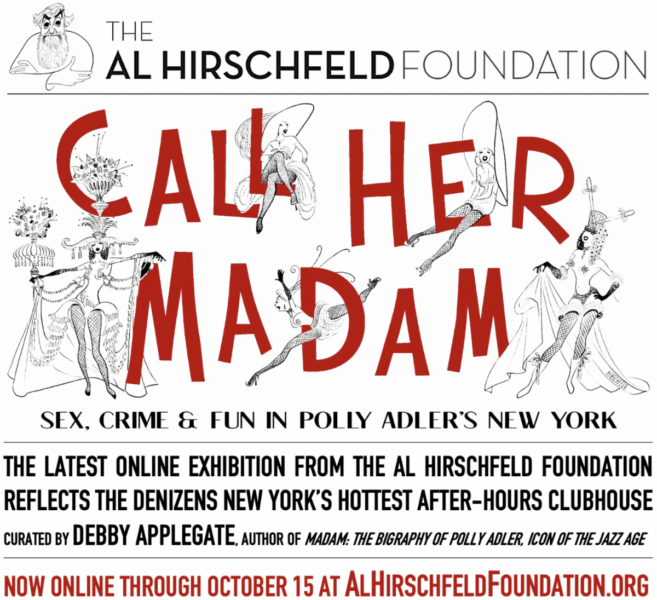 To call Polly Adler (1900-1962) the most famous madam of the Jazz Age does not do her justice. In those heady days between the world wars, she was one of New York’s most celebrated hostesses and an underworld icon, whose swinging parties and deluxe bordellos were patronized by some of the biggest names of the era. Her heyday coincided with Broadway’s Golden Age when the Main Stem reigned as the glittering, gritty playground of America’s “tinsel aristocracy.”  Talk-show host and pianist Oscar Levant recalled “Polly Adler’s was the meetinghouse for all Broadway in those days.” Her customers included the VIPs of Café Society, Hollywood, Wall Street, Madison Avenue, Park Avenue, Tin Pan Alley, Madison Square Garden, Tammany Hall, the Friars Club, the Algonquin Round Table and the NYPD.

“Polly opened her first brothel in 1920, at the start of Prohibition. By 1923 her ‘speakeasy with a harem’ as she called it, had become the city’s hottest afterhours clubhouse and taboo hideaway,” says Debby Applegate, author of Madam: The Biography of Polly Adler, Icon of the Jazz Age, and guest curator of the online exhibition. “Al Hirschfeld captured many of Polly’s pals in his illustrations from those years. This exhibit offers a sample of Hirschfeld’s drawings of the colorful characters who made up their mutual social circle.”

Go behind the lines of Hirschfeld’s art with “The Hirschfeld Century Podcast,” nominated as “Best NYC podcast” by the 2020 Apple Awards. A special episode dedicated to the works featured  in “Call Her Madam: Sex. Crime & Fun in Polly Adler’s New York” will be available starting August 24 from AlHirschfeldFoundation.org/podcasts, iTunes and other popular podcast sites.