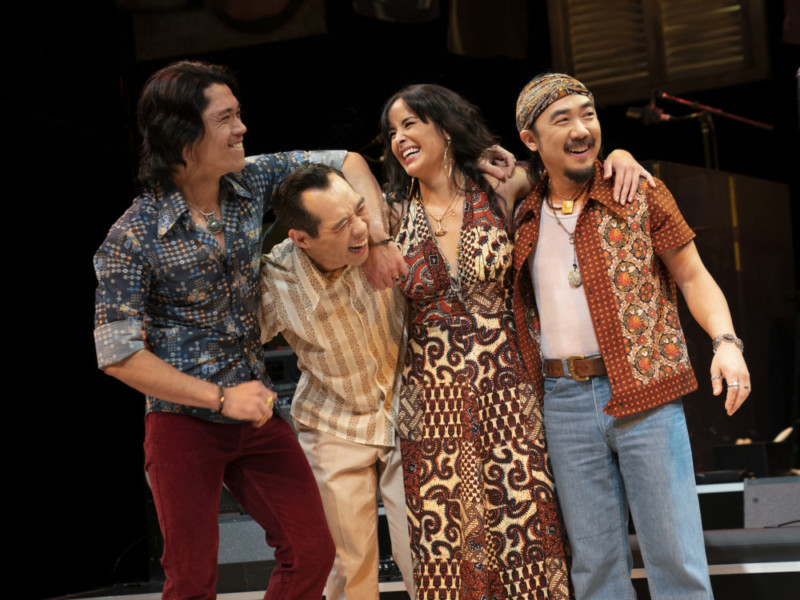 Vibrant, energetic and immensely talented Lauren Yee’s play with music Cambodian Rock Band, is inhabiting the stage at The Signature Theatre. Most people only know about Cambodia’s history and Pol Pot’s communistic reign of terror through Roland Joffés’s 1984 film, The Killing Fields. As a a result of the Vietnam War and the American’s pulling out, the Khmer Rouge move into the capital and annihilate over two million Cambodians, or about a quarter of the entire population.

Before the murder and conflict that affected the Cambodian people, American-style pop-rock was all the rage. The play starts there before the massacre occurred. The Cyclos (Moses Villarama, Joe Ngo, Courtney Reed, Abraham Kim), begin as we are introduced to Duch (pronounced “Doik”) (, also something of a narrator, who routinely breaks the fourth wall which no other character does.

The show in a sense is hosted by the band The Cyclos, as the past and the present. They are introduced by a man named Duch (pronounced “Doik”), (Francis Jue), who not only narrates breaking the fourth wall, but plays two of the main characters in this piece.

As we go forward in time, we meet Neary (Courtney Reed), a 26-year-old Cambodian-American who is working for a non-governmental organization in Cambodia seeking to prosecute members of the Khmer Rouge, When her father Chum (Joe Ngo), arrives unexpectedly to dissuade her from working on the case, the past comes into play. Chum fled Cambodia as a refugee, but his past holds keys to the present.

Chum was part of the band and under the Khmer Rouge. His family who knew what was coming wanted to flee, but Chum wanted to record an album and needs some extra time. Due to this selfish decision his family was all slaughtered. On the day the album is finished, the Khmer Rouge descend.

In Act II Chum has been captured and is being held as a spy. He is given hope when a fellow band member is one of his prison guards. Then he is discovered by Duch. It seems that he is the current head of S21, a former school, where almost all of the prisoners have been murdered. Music calms the savage beast, but in the end who are the beasts and what makes them become so?

This cast is multi-talented, both as layered performers and exquisite musicians. Jue, Neary and Ngo, stand out, but all the actors are also members of The Cyclos. Providing the fabulous beat on drums is Abraham Kim; Jane Lui, is not only the the keyboardist, but also the musical arranger and Moses Villarama’s multiple roles and bass reach our heart.

The music provides a solace in this world of killing. Sung in the Khmer language, most of the score was composed by Cambodians who were killed by the Khmer Rouge or reconstructed by the American band Dengue Fever. Director Chay Yew, has smartly allowed his actors to speak in English, so there is a bridge to understanding the trauma, as well as the joy before this horrific stain. It also allows us to see that time has allowed for the music to come back and heal.

Visually Takeshi Kata’s, set’s tell you exactly where you are, as David Weiner’s, haunted lighting sear the visuals into our minds. Linda Chow’s costumes add brightness to a otherwise black time in history.

Cambodian Rock Band powerful message is about the resilience of the human spirit. Without music can there be humanity?