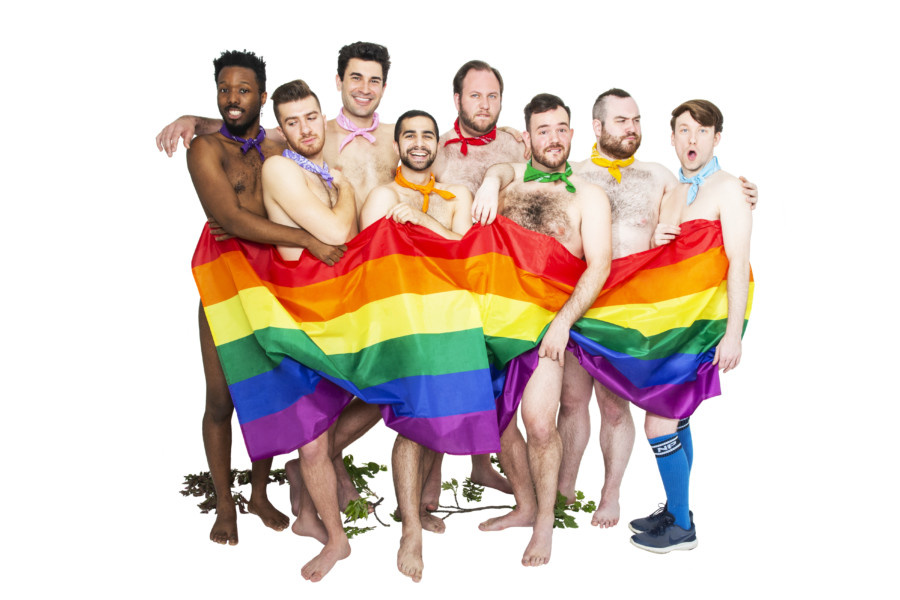 Set in a nudist camp for gay men, like Rocky Horror Picture Show, finace’s Randy (Alex Gagne) and Gabe (Tim Granham) get lost and end up in a place that changes them. In this case Camp Morning Wood, where everyone goes naked. That is the catch to this show, as it was in Naked Boys Singing. Filled with gay men (I was one of four women in the audience), this show is geared to their tastes, but it is highly inconsistent. With five different composers, Derrick Byars, Bobby Cronin, James Dobinson, Matt Gumley, and Will Shishmanian, it is no wonder. The performances are obviously non- union, as they lack a professionalism and true character study, but this is not high art.

The show is goofy and boarders on camp, though everyone is not on the same page. As Randy a professor of colonial queer studies, longs to get his relationship back on track with Gabe, troubles have ensued. Gabe refuses to set a date for their wedding ever since their three way with Kincaid (Michael Wilkes). He wants more and feels trapped. To make matters worse Kincaid, a hot narcissistic user ends up being the boyfriend of the man who runs the camp Jacques (Brady Vigness), who steals the show with his “Qui Qui Monsieur”.

To Jacques these campers are his nudie patooties and he is about to lose his beloved camp to Senator Dick Snatch (Courtney Dease), who of course is closeted. Like all good light fair, the show ends with good messages and a happy ending.

Not quite sure why Alex Gagne was cast, as he sings off pitch and is not the best actor, but Brady Vigness steals the show with his french Camp director numbers and his consistent performance. So does Anthony Logan Cole who you may not like his character, but he struts his stuff with all his might. as a sex-driven bear has the best voice of the group and Ethan Gwynn makes the most of his number about being a well-hung black guy who wants to be seen as more than that.

Conceived and directed by Marc Eardley, with book and lyrics by Jay Falzone this show will hit it’s targeted audience but it not well crafted. They should take notes from Ryan Laundry who understands this genre and does it to perfection up in Provincetown.

Suzanna BowlingJuly 21, 2021
Read More
Scroll for more
Tap
The Shed’s Dragon Spring Phoenix Rise Stumbles Up High on its Dialogue
He Says: Atlantic Theater’s The Secret Life of Bees Buzzes Beautifully Around My Head so Sweetly