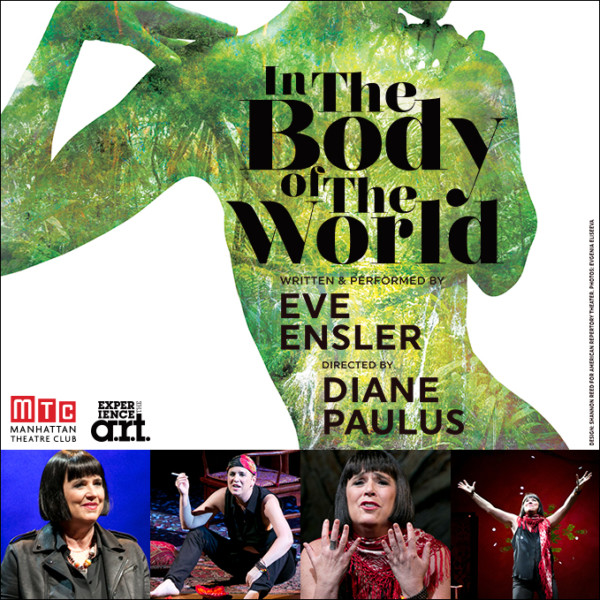 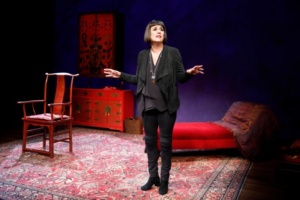 “The chemo is not for you, Eve. It is for the cancer, for all the past crimes, it’s for your father, it’s for the rapists, it’s for the perpetrators. You’re going to poison them now and they are never coming back,” stated by Sue, Eve Ensler’s therapist. 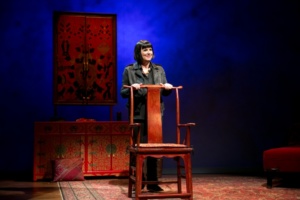 If I wasn’t afraid of cancer before, Eve Ensler’s In the Body of the World, has me terrified. I most definitely will not be going to the Mayo Clinic, which she calls “Cancer Town” or Sloan Kettering, where doctors are inhuman. Commissioned by Diane Paulus and the American Repertory Theater, Eve Ensler has turned her 2013 memoir In the Body of the World into a ferocious, mind numbing, naked account of what she and other women have gone through. Rape, child abuse, mutilation, torture and murder of infants, toddlers, girls, young women, mothers, grandmothers in the Congo and cancer, are merged together as if they are one subject that should be thought of together and intertwined. 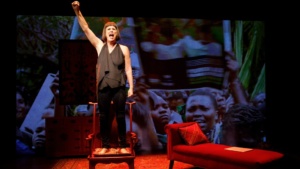 The show is really about how Ensler disconnected from her body due to the sexual abuse by her father and like most children the sexual assault was compounded by the mental abuse where she was constantly told she was stupid. Ensler, sought to reconnect to her body, but failed with anorexia, drugs, promiscuity and finally activism. But it wasn’t unitl Ensler, best known for the Vagina Monologues went to the Democratic Republic of the Congo, to help victims of rape and torture to create a sanctuary called City of Joy, that she starts her journey back. It in the Congo that she is diagnosed with stage 3-4 uterine cancer. She comes back to the states and meets her rock and roll looking surgeon stating “Radiate my vagina? Do you have any idea who I am?”, as if anyone deserves to have to go through this kind of hell. Ironic yes, considering she is a self professed feminist, who advocates for women, who has turned  Valentine’s Day into V Day, a day of protest and consciousness raising. She speaks out against violence against women and has done much to be admired for. 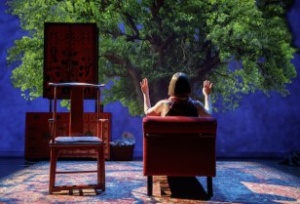 Ensler uses humor and metaphors to deal with her illness. During this time the Gulf oil spill happens and she compares it to her post-surgery infection. She has a morbid sense of humor. 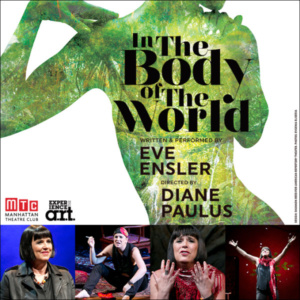 Like Wit, Ms. Ensler strips, so we see her breasts and then her scars. She proclaims she does performance art, but really do we need this much information?

We learn about her relationships with her mother, her sister and her adopted son. It is in these relationships we feel the most compassion. Suddenly she is not someone who hides behind her mechanisms to survive. We see a vulnerability and the ability to see the beauty in life despite the circumstances.

Then she throws in the forced rape and then the forced eating of a fetus, which was beyond disgusting and I am not sure why that was there.

Ms. Ensler is totally creative and a force to be reckoned with and there are many who will find this show touching and appealing.

Diane Paulus (Waitress, Pippin) direction keeps this piece visual and moving. She has made this a journey, that by the end ,we feel we have traveled on.

The projections by Finn Ross, the exquisite set by  Myung Hee Cho and the luminous lighting by Jen Schriever, are all well done and add to the moments. In the end the set turns into Shangri-La and we are told we can walk through it’s jungle like beauty. Cancer has been beat and City of Joy has been built and is thriving.

“Welcome chemo as an empathetic warrior that will purge the badness that was projected onto you but was never yours”, as told to Eve Ensler by her nurse.

In the Body of the World: Manhattan Theatre Club at City Center Stage I, until March 25th.

Suzanna BowlingMay 12, 2022
Read More
Scroll for more
Tap
The Bench Offers Insights Into How People Become Homeless
He Says: ATC’s Hangmen The Smell of Death Never Really Vanishes, Does It?