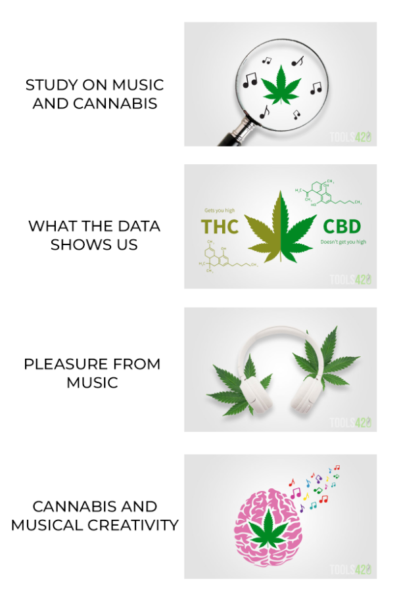 From festivals to concerts and jazz to reggae, it’s no secret that cannabis use has been a major part of the worldwide music scene for as long as it has been around. Many musicians credit their success and creativity to this substance while listeners and live audiences often enjoy being under the influence. Listeners and partygoers frequently enjoy smoking to enhance the experience, and new research is showing us why.

Why is weed and music synonymous in certain communities, and what does the raw scientific literature show us? A handful of published studies have shown us how cannabis interacts with the reward system, creativity, and other merits related to music.

A study on music and cannabis

Recently in 2018, IJNP, or the International Journal of Neuropsychopharmacology conducted an in-depth study to monitor what happens inside the brain when someone is exposed to cannabis and music.

By using MRI imaging among other data collection methods, they conducted the first study involving the human brain, CBD, THC, and music. Using a sample size of 16 people, they came across some interesting results.

By smoking cannabis and using dry herb vaporizers, subjects were monitored emotionally and neurobiologically, with their data was recorded for analysis.

What the data shows us

First, it’s important to distinguish the differences between THC and CBD:

THC is responsible for that sensation of being high and is psychoactive, while CBD is not. They both have a variety of effects on the brain and body though have some different actions that each other.

In the study, three groups were tried: One under the influence of THC only cannabis, one with both CBD and THC, and one with placebo.

Contrary to predicted results, administration of CBD and THC in fact dampened the effects of music in the brain region sensitive to reward and emotion. Essentially this means, the reward system and emotional responses seemed to be lower than placebo and control groups while listening to music with weed.

Even those conducting the study predicted a stronger response to music while administered cannabinoids, however the explanation for why this happened can be summed up.

It’s known that THC interferes with the innate reward system, and likely affected the neurotransmitters related. However, cannabis with both THC and CBD did not have any difference compared to placebo in terms of monitored neural activity.

This essentially means that cannabis with THC and CBD is likely to leave your brains reward and emotional system closer to ‘normal’ than cannabis only with THC.

Why does music feel better with weed for so many people then? Well, this lies in the dopamine system, which is responsible for feelings of pleasure among others.

Cannabis is known to interact with the dopamine system, often providing a favorable and pleasant feeling. Feelings of euphoria, awe, and general enjoyment are heightened when under the influence.

So while the data from the most recent study shows a negligible or even negative interaction with one reward system in our brains, the general function of our pleasure system seems to override and elicit feelings of enjoyment.

What about creativity though? Well, a pair of studies in 2002 and 2012 have displayed that THC use substantially increased ‘phonological fluency’, which is a measure of divergent thinking. This was especially true among people with low trait creativity.

What this means is that cannabis was essentially measured to improve creative thought processes and different ways of thinking. In relation to writers block or musicians block, cannabis use has been a major tool for many acclaimed musicians.

Music and weed have a tight relationship in many musical communities around the world, some more than other. While much of the science and understanding about both the brain and cannabis is still unknown, some conclusions can be drawn from what we know already.

While it seems that THC might even have a negative impact regarding the reward system and music, CBD seems to counteract this. Furthermore, euphoria and enjoyment increases while under the influence thanks to our dopamine system.

The ability to put the brain into a creative state of mind is well documented both by anecdotal reports and scientific research. This of course may lead to interesting results while songwriting and the end product.

With all that being said, cannabis and music have a strong relationship and many are interested to understand more about what goes on behind the scenes.  While we can’t outright say that smoking is any good for you or if vaping weed is better for your health than smoking , it seems that the psychological stress relief and satisfaction in itself is merit conductive to healthy life.