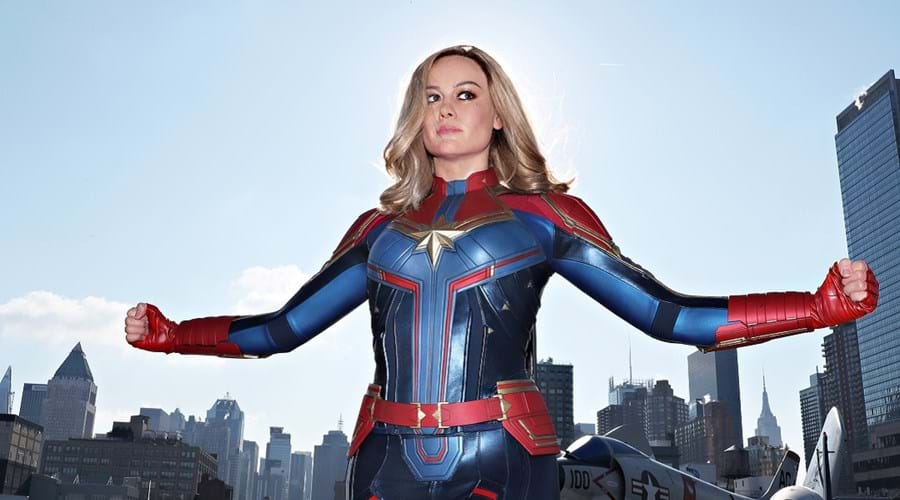 As Captain Marvel continues to dominate the global box office for a second week in a row making an additional $69.3 million from North American theaters and $120 million internationally, bringing its global grosses to $760 million. T2C hit Madame Tussauds New York, 234 West 42nd Street for Marvel Super Heroes  that includes Brie Larson as Captain Marvel, The Hulk, Thor, Captain America, Iron Man, Spider-Man and more. This is a perfect place to take your kids, no matter what age. Mine simply adored the adventure and as touristy as I thought this might be was completely amazed and entertained. This is for New Yorkers as well as tourists.

Marvel Super Heroes 4D is an experience not to be missed. This fabulous 4D film incorporates 3D film technology with thrilling special effects, including wind, water and even SMELL.This isn’t a movie. This is a true super hero experience that puts YOU in the middle of the action and was one of my favorite parts of this whole experience.

A 7D experience (7D refers to the seven different special effects) called, Mission: Undead tasks you with killing more zombies than anyone else. Combining the thrill of a roller coaster with the kinetic action of a video game, cinematic twists and turns bring this zombie movie to life. In custom-built chairs designed to move along with the game, 3-D glasses and a laser gun you’ll point at the zombies’ heads, expect a major adrenaline rush. At the end of Mission: Undead, all players are ranked according to the zombie hits you racked up during the game.

What Madame Tussaud’s is known for is the famous people they create out wax. They range from actors to singers, politicians and everyone in between. See how many you can name.

Celebrating the return of Ghostbusters, Madame Tussauds has the eerie underground tracks of the NYC subway, the basement of a haunted mansion and Ghostbusters Headquarters. My filmmaker son Zach loved this section.

These two shows are also on Broadway.

Madame Tussauds New York, 234 West 42nd Street. Prices start at $29.95 and include access to Marvel Superheroes 4D which is fabulous. They do not include The Walking Dead. For that prices begin at $37.95. Give yourself a good 2 hours and expect to have fun!