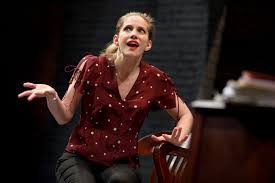 Cardinal: A Town Without Pigment

Cardinal: A Town Without Pigment 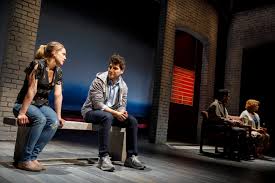 Greg Pierce’s new play, Cardinal doesn’t make a strong case for urban renewal or immigration. Lydia Lensky (Anna Chlumsky), was born in a small town where the main work came from a factory that made car axles. Now defunct, the town is slowly dying. Having moved away after high school Lydia, has come back to make good. She has come to meet with her sister’s ex-boyfriend and now the newly elected mayor Jeff Torm (Adam Pally). Jeff ran on a platform of urban renewal. Lydia’s big plan is to paint the main part of town cardinal red and make it a  tourist destination. She succeeds, but in doing so pushes out long time local Nancy (Becky Ann Baker) and her mentally challenged son Nat (Alex Hurt), who run a local bakery and gift shop. Nancy feels that the town has become a place where she no longer belongs, when she is asked to paint the last thing of her deceased, husbands red. She resigns herself it is time to move on, something she never thought she’d do. 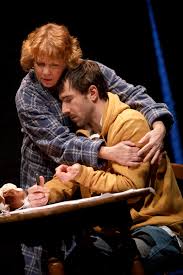 Lydia, thanks to a wave of publicity, also manages to attract Li-Wei Chen (Stephen Park), a Chinese businessman and entrepreneur, who takes advantage and sends tour buses to the area. The two clash when the tour buses lie about the town’s history. Then Mr. Chen starts to buy up the small business including Nancy’s shop. The town now being over run by the Chinese, becomes volatile as the locals do not take to kindly to the new invaders. To make matters worse the only local grocery store is replaced with a Asian market that sells nothing the locals want. 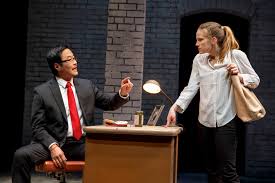 Lydia and Jeff are sleeping together, but he sees her as a poor imitation of her sister who he never got over. He is also none to keen on her steamroller approach.

In her attempt to save the town Lydia fails to see the alienation she has caused to the local citizens who grew up here.

Lydia realizing she is out of her league buys on credit the factory to turn it into a hospital and gets Mr. Chen as her partner. Mr. Chen agrees if Lydia will marry his son Jason (Eugene Young). Jason, however wants to break free of his father.

In the end, the whole rush to save a town backfires and nobody wins, especially the audience who had to watch this.

None of the characters are that fleshed out, or if they are, does it make us care about them. They are like caricatures of cartoons humans. Lydia, did a something stupid in high school and has paid for it ever since. She is broke, lived in Brooklyn, managed some bands, knows a lot about towns that reinvented themselves and has a lot of knowledge. She is back home to save it, but not herself? Why? Jeff can not get over her sister, has become mayor with no background and is so blasé, but maybe that is because of the drugs he is on. Nancy lets her mentally challenged son Nat have complete run over the bakery and he escapes from over 6 miles in the pouring rain without anyone noticing. She still dislikes Lydia for a teenage prank, that wasn’t that horrible and she’s had at least 8 years to get over it. Only Mr Chen and his son make any kind of sense.

The actors do the best with what they have been given.

Kate Whoriskey’s direction does keep the show at a clip.

In the end the audience is left with towns dying, but still a home to those who were born and raised there or locals being forced out and America becoming less and less American. Some choice.