Carmen Cusack a Supernova And A Bright Star

Carmen Cusack a Supernova And A Bright Star

Carmen Cusack is definitely a whole lot country, but also a whole lot more. Performing at Feinstein’s/54 Below on Easter Sunday, Ms. Cusack gave her all, as most of the audience was rescheduled due to a NYC’s snowstorm in March, that left her stranded in Florida. Ms Cusack is quirky, with a wit and a style that is all her own. Entering with a sound that was reminiscent of a 1920’s chanteuse and using a tricked out bullhorn, to croon the self composed “Along the Way.” she immediately had us in her grasp. Best known for her Tony nominated role in Bright Star, the show that gave her a Broadway debut came a medley of songs from the show that included “So Familiar” / “Can’t Wait To See You” / “Love Has Come For You,” all written by Steve Martin and Edie Brickell. Later on in the set “Pour Me Another Round”/ “Tell Me She Didn’t”/ “Way Back in the Day” /”She Use to be mine”/”If You Knew My Story”, her signature song from Bright Star were given recognitions and were thunderously applauded. 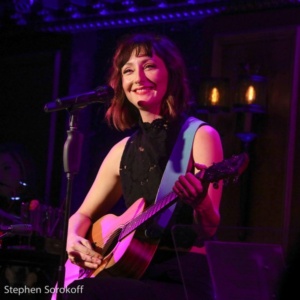 Eva Cassidy’s is a Cusack favorite and her song “Songbird” made you want to hear more of Ms. Cassidy’s repertoire. Ms. Cussack is a prolific songwriter and a rather wonderful lyricist, which she proved with “Shane,” “Rebellious Child,” “Middle Lane” and “You Dear.” Each had there own style ranging from sensual passion, to anguish to soulful gospel that enraptured you into being possessed. In “You Dear,” we learn the song was written for a man she’d been dating who, upon hearing it, realized, “Shit, now I have to marry her.” 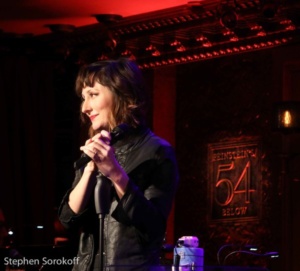 Hoagy Carmichael & Ned Washington’s “Nearness of You,” showed Ms. Cusack’s expertise at taking a standard and making it her own, while Curtis Mayfield’s “People Get Ready” was a gospel revival. Her amazing band: Musical Director Rodney Bush (piano); Dean Sharenow (drums); Joe Jung (guitar); Alex Eckhardt (bass); and the incredible Martha McDonnell (fiddle) expand the experience. It was the perfect blending of musicians.

Ms. Cusack had been requested to sing “She Used to Be Mine” from the Sara Bareilles’s musical Waitress and the performance was the next day, so she tried it out on us. I love Jessie Mueller’s version, but attention producers and casting directors Ms. Cusack’s version was not only outstanding, but unstoppable. You felt like you were witnessing a star being born. What was so interesting about this night is Ms. Cusack was exhausted. She has been doing concert after concert, from town to town. She had just flown in from performing at the Tribute for Pete Seeger at the Kennedy Center the night before. It turns out that snow storm in March has been her only day off. She was giddy, used a music stand for some of the songs and had hurt her thumb, so she had trouble according to her, playing her guitar and still she was like a rare star in the heavens.

The evening closed with Sam Brown, Gregg Sutton, and Bruce Brody rambunctious “Stop” and a loving version of Eric Carmen’s “Tonight You’re Mine.”

Cusack’s range is elusive and she can not be boxed into a single style of music, as she excels at all of them. It will be interesting to she where she lands next. My guess, is the singer/songwriter category like Carrie Underwood, Taylor Swift and Faith Hill. Let’s just hope she stays with Broadway and musical theater and doesn’t get swept into international stardom.