Williamstown Theatre Festival (Mandy Greenfield, Artistic Director) has announced casting and creative team additions to the 2018 season including Tony Award winners Natasha Katz and Clint Ramos, as well as details on additional programming and special events for the 2018 summer season.

Additional casting for the Main Stage and Nikos Stage productions include Azudi Onyejekwe and Andrew Samonsky in Lempicka, Portia and Ray Anthony Thomas in Artney Jackson, and Leon Addison Brown and James Waterston in The Member of the Wedding.

The summer will also feature special events throughout the season including the Season Sneak Peek & Reading, The Hot Spot, and the always-popular Fridays@3 reading series. The Season Sneak Peek reading of Greg Keller’s new comedy The Jokers will include Joniece Abbott-Pratt, Gerry Bamman, and Debra Monk, in addition to the previously announced Marin Ireland and Morgan Spector. The Hot Spot is a sizzling series that shines a spotlight on a performer or group, and on August 4, Ophira Eisenberg, the edgy, witty, and self-deprecating host of NPR’s and WNYC’s “Ask Me Another” brings Playing The Odds, a new show all about the gambles of life and how to survive and fail up.

By popular demand, the 2018 season will include the Fridays@3 reading series.  A number of new plays read at Fridays@3 have manifested into full Festival productions, including this season’s world premiere musical Lempicka on the Main Stage and the new comedy Seared on the Nikos Stage. This year, the line-up of readings includes Tell Me I’m Not Crazy by Sharyn Rothstein and featuring Mark Blum and Jane Kaczmarek (July 6); Saying Goodbye to the People I Love From My Bathtub by HalleyFeiffer, directed by Trip Cullman, and featuring Halley Feiffer, Paola Lazaro, Deborah Rush, and Ryan Spahn (July 13); Long Lost by Donald Margulies, directed by Tony Award winner Daniel Sullivan, and featuring Kelly AuCoin (July 20); Secret Soldiers, book by Marsha Norman, music and lyrics by Zoe Sarnak, directed by Leigh Silverman, and featuring Jamar Williams, (July 27); and Selling Kabul by Sylvia Khoury and featuring Omar Metwally and Marjan Neshat (August 10). These readings have limited availability and will be hosted at The Clark Auditorium. 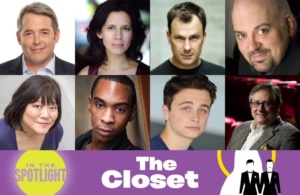 Tony Award winner and Golden Globe and Emmy nominee Matthew Broderick stars in this world premiere comedy by Douglas Carter Beane, inspired by Le Placard, the French comedy by Academy Award nominee Francis Veber.  Martin O’Reilly (Broderick) is stuck in Scranton in a dead-end job, his marriage is over, and his son won’t return his calls.  His only friend is his eternally optimistic co-worker (Tony nominee Jessica Hecht), who can’t bake enough muffins to stave off her romantic longings.  When a stranger (Tony nominee Brooks Ashmanskas) sashays into their world, he drags Martin—and everyone around him—out of their respective closets.  Helmed by Mark Brokaw, this contemporary satire breaks the chains of political correctness and celebrates the possibility of finding authenticity and love (and show tunes) in unexpected places.

Featuring Tony nominee Carmen Cusack and Eden Espinosa, this world premiere musical is directed by Tony nominee Rachel Chavkin, with music by Matt Gould and book and lyrics by Carson Kreitzer.  Fleeing the Russian revolution and leaving behind a world of opulence and wealth, aristocrat Tamara de Lempicka (Espinosa) and her beloved husband Tadeusz (Andrew Samonsky) are forced to make a new life.  In the rising tide of fascism, Tamara takes to painting to survive, and when she meets the free-spirited Rafaela (Cusack), a prostitute on the fringes of Parisian society, she’s torn between the life she cherishes with her husband and the passion, ambition, and possibility awoken in her by her new muse.  Inspired by the life of the artist who transformed herself from penniless refugee to star of the art world when the world itself teetered on chaos, Lempicka looks at the beauty and danger of one painter pursuing it all.

By special arrangement with Seaview Productions and Marathon Live Entertainment

Gaye Taylor Upchurch directs this revival of Carson McCullers’ beloved play.  On the eve of a family wedding in 1945, housekeeper Berenice Sadie Brown (Roslyn Ruff) can’t calm the nerves of her 12-year-old charge, Frankie (Tavi Gevinson).  Berenice has raised Frankie and her cousin John Henry (Logan Schuyler Smith) as though they are her own children.  But as their companion, playfellow, and mother figure, Berenice is suddenly struggling to protect them from the harsh, racially motivated injustices lurking just outside their Southern home.  This cherished American work explores the complicated reality of a thoughtful and hard-working woman caught between two worlds.

The Member of the Wedding is presented by special arrangement with Samuel French, Inc.

with Will Hochman and Mary-Louise Parker

Emmy, Golden Globe, and Tony Award winner Mary-Louise Parker stars in this world premiere play by Pulitzer Prize finalist Adam Rapp, directed by David Cromer. Bella Baird (Parker) is an accomplished professor at an Ivy League university who prizes her solitude.  But when she faces a challenge she cannot tackle alone, she allies herself with a brilliant and mysterious student, Christopher (Will Hochman). Intensely intimate and deeply moving, this haunting play probes the question of what one person can do for another.

In this world premiere play by James Anthony Tyler, Artney Jackson (Ray Anthony Thomas) is a devoted mentor, a respected employee at the local cable company, and an enthusiastic teller of “dad jokes.” After twenty-five years, he is finally up for promotion: he can almost taste the possibility of becoming a manager.  Over the course of one week, Artney’s decades-old routine is shattered when his son makes plans to move out of their home, the higher-ups test his resolve to lead, and co-workers show their true colors. Will Artney Jackson overcome the turmoil and rise up?  Directed by WTF Associate Artistic Director Laura Savia, this funny and touching play examines what it really means to give it your all at the office!

Chef Harry (Steven Pasquale) is a genius in the kitchen; his scallops are the “it” dish in Brooklyn.  His business partner, Mike (Michael Esper), wants to expand their restaurant, but Harry sees that as selling out.  When a shrewd consultant (Krysta Rodriguez) is brought in to make the case for expansion, Harry boils over. Can their most devoted employee (Tré Davis) help to put the lid back on?  Tony nominee Moritz von Stuelpnagel directs this new fit-for-foodies comedy by critically acclaimed playwright Theresa Rebeck, which grapples with the intersection of creativity and commerce.

Noxolo (Alfie Fuller) is an aspiring footballer from Cape Town who moved to London for a fresh start.  With the World Cup coming to South Africa and the mounting sense that her ex-lover, Pretty (Emmy nominee Samira Wiley), is in peril, she is pulled back.  Will Noxolo risk her safety to unravel the secrets of a life she swore to leave behind?  Saheem Ali directs Jen Silverman’s new play that asks what one woman can do for her people, for her nation, and for the love of her life.

For over six decades, Williamstown Theatre Festival, recipient of the Tony Award for Outstanding Regional Theatre and the Commonwealth Award for Achievement, has brought emerging and professional theatre artists together to create a thrilling summer festival of premiere work alongside fresh, new productions of the western canon, and offers a rich array of accompanying cultural events including COMMUNITY WORKS, Late-Night Cabarets, along with readings and workshops of new plays.  Under artistic director Mandy Greenfield, the Festival launched a New Play and Musical Commissioning Program through which theatre artists including Nathan Alan Davis, Halley Feiffer, Justine Levine, Matthew Lopez, Marsha Norman, Jiehae Park, Zoe Sarnak and Benjamin Scheuer, among others, are creating new work year-round.  The Festival runs unmatched training programs for new generations of theatre talent, and artists and productions shaped at the Festival fill theatres in New York, London, and around the country each season.  Williamstown Theatre Festival’s productions of Bridges of Madison County, The Elephant Man, Fool for Love, Living on Love, and The Visit enjoyed critically acclaimed runs on Broadway, with The Elephant Man and The Visit receiving Tony Award nominations for Best Revival of a Play and Musical, respectively.  In addition, the Festival’s world premiere productions of Cost of Living (2018 Pulitzer Prize Winner in Drama) and Actually played acclaimed Off-Broadway runs at Manhattan Theatre Club, and the 2015 production of Paradise Blue is currently playing at Signature Theatre in New York.