When you think of Carmen Jones,you think of how Dorothy Dandridge and Harry Belafonte broke boundaries. Ms. Dandridge was the first African American to be nominated for the Academy Award for Best Actress for the film version. This rarely seen 1943 Broadway musical with music by Georges Bizet and lyrics and book by Oscar Hammerstein II, is being revived by Classic Stage Company. It’s basically Bizet’s opera Carmen,updated to a World War II-era African-American setting. This original Broadway musical was produced by Billy Rose, using an all-black cast and was successful for its time. 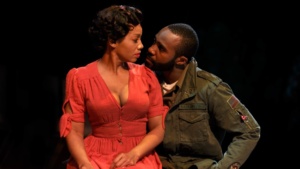 Director John Doyle has again stripped down the piece, allowing the passion of the music, sexual tension, and violence speak for itself. 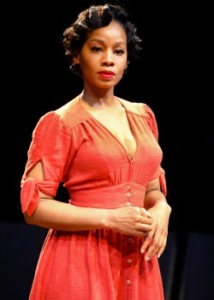 Set during World War II, Cindy Lou (Lindsay Roberts), has come looking for Corporal Joe (Clifton Duncan), the boy from back home. When she is harassed by the officers, Cindy Lou retorts “I’m a chick dat likes one rooster/Never mess aroun’ wid two/Dat is why I mus’ refuse ter/Be more den jus’ perlite to you!” However, her man Joe has come under the amorous attentions of Carmen Jones (Anika Noni Rose), a woman who thinks only of herself and her wants. She is the woman all men want, and all women despise. Working in a parachute factory in North Carolina, she has been arrested for fighting. The leader of the guards, Sgt. Brown (Tramell Tillman) wants Carmen, but she has set her sights on Joe, so Sgt. Brown has him bring her to the brig. Before he does, Joe and Cindy Lou sing “You Talk Just Like My Maw”. Carmen wants Joe, but he spurns her, which makes her want him even more, so she seduces him to let her go. Joe is locked in the stockade for allowing his prisoner to escape. As Carmen awaits his release, she meets prizefighter Husky Miller (the wonderful bass David Aron Damane) who wants her and her friends to accompany him to Chicago. She declines the offer, as she is waiting for Joe. When he arrives, he announces he must report to flying school immediately. Annoyed that Joe would not choose her, Carmen decides to leave with Sgt. Brown, which angers Joe, who beats him. Realizing he will be sent to prison for hitting his superior, Joe flees to Chicago with Carmen. 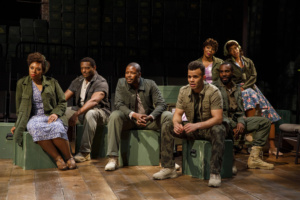 The cast of Carmen Jones Photo by Joan Marcus

Things in Chicago are not perfect, and Carmen wants more. She secretly visits Husky and has her cards read, which predicts impending doom. Cindy Lou arrives at Husky’s in search of Carmen just before Joe appears. Ignoring her, he orders Carmen to leave with him and threatens Husky with a knife. Carmen helps Joe escape the military police but returns to Husky’s big fight. Joe finds Carmen and begs her to return, but she has moved on. Furious over the betrayal, Joe strangles Carmen to death.

Hearing Bizet’s music sung to Hammerstein’s slang-style lyrics does not always work. In “Dat’s Love,” Carmen sings: “You go for me an’ I’m taboo/But if you’re hard to get I go for you/An’ if I do then you are through, boy/My baby dat’s de end of you.” The band – six musicians on an elevated wooden deck above the stage – however, does wonders with Joseph Joubert’s jazz-inflected orchestrations. “Beat Out Dat Rhythm on a Drum,” formally known as the “Gypsy Song” is given a divine turn by Soara-Joye Ross.

Like Dandridge before her, stage and screen actress Anika Noni Rose sizzles with sex appeal. She is the ultimate lady in red and this show is all hers. It is hard to pick out who sang the best as this show is vocally astounding. Bravo to David Aron Damane, Erica Dorfler, Clifton Duncan, Andrea Jones-Sojola, Justin Keys, Lindsay Roberts, Soara-Joye Ross, Lawrence E. Street and Tramell Tillman, you all managed to create intricate characters, while sounding glorious.

Bill T. Jones choreography blends 1940s swing and African dance. Together with Mr. Doyle, the two have created a sweaty version of life back in the South, that breathes in memories about the past.

Scott Pask’s minimalistic sets create a factory, a train, a barroom and a country club using only ceiling fans, cartons, military crates and parachute cloth. It helps that the moody lighting is by Adam Honore. Ann Hould-Ward’s costumes make us want to shop in Carmen’s closet.

How many women have trapped men in bad decisions simply because they could not see past the lust? Carmen Jonesmay not be the appropriate show in the #MeToo era, but it also shows that men are sometimes too easily lead and careless at who they hurt in the moment of passion.

Suzanna BowlingNovember 19, 2022
Read More
Scroll for more
Tap
Glenda Jackson Is Coming Back To Broadway In King Lear
Get Ready for the cast of Smokey Joe’s Cafe to Amaze