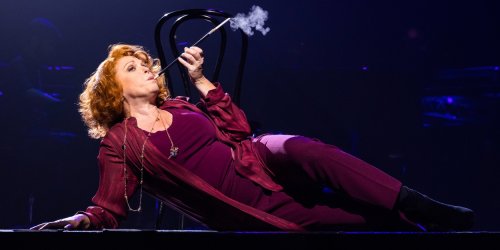 “Songs for a New World is about the journeys we all take as we face challenging decisions or an uncertain future.” Mark S. Hoebee director.

Last night Paper Mill Playhouse’s production of Jason Robert Brown’s Songs for a New World, opened. This song cycle, which was Brown’s first show needs top rate singers with powerful belts and ranges. What this version of the show has going for it, is three-time Tony Award nominee Carolee Carmello (Parade) who knocks every solo out of the park. She is a masterclass in acting and performance. Her “Surabaya Santa.” is perfection.

Another thing this version has, is Brown added some new orchestrations when he was recording the Encores version, which are like little undiscovered gems if you know this score by heart, which I do. The orchestra led by Sinai Tabak (Broadway’s The Cher Show), are at the top of their game. Though in the beginning the songs seem a little under tempo, that quickly resolves. Songs like”The River Won’t Flow” and “The Steam Train” will have you dancing in your seats. What Brown does exquisitely is beat.

Andrew Kober (Beautiful) almost feels like an older mature Brown and his version of “She Cries” is really well done. Love the guitar gem by Matt Hinkley in this piece.

Mia Pinero (Broadway’s West Side Story), has the soprano numbers. She acts and moves well, but is sometimes sharp and her vibrato is at times too fast for me.

Roman Banks (Dear Evan Hansen), has presence, moves, acting chops (“King of The World”) and a softer tone to his voice. Vocally he is miscast in this piece. My favorite song and the 11 o’clock number “Flying Home” didn’t have the power or ump to make it exciting or thrilling. Mr Banks also adds riffs that are not there and they do not work. He also needs to watch his pitch.

The problem is when you have two strong singers like Carmello and Kober the tight harmonies just seem out of balance and don’t soar as well.

Mark S. Hoebee directs and gets winning acting performances from his cast.

The scenic design by Kelly James Tighe (Paper Mill’s Beauty and the Beast), is well done as is the lighting design by Charlie Morrison (Paper Mill’s West Side Story). The costume by Jen Caprio (Paper Mill’s Beehive) are god forsaken, especially for the women. They are ill fitted and dowdy. It looks like she went shopping in a thrift store and the actors were stuck with what she choose.

Originally mounted off-Broadway in 1995, Songs for a New World features highly theatrical songs about people standing on the precipice of life. Most musical theatre audiences know “I’m Not Afraid of Anything” and “Stars and the Moon,” which are staples of the cabaret scene. This show revolutionized the “song cycle” and is done in theatre’s all over the country because it is so thrilling. There are some fabulous versions on YouTube.

The Paper Mill Playhouse Production should not be missed though, as Ms. Carmello’s performance and the added musical gems are worth the price of admission.