Caroline, or Change Misses The Mark 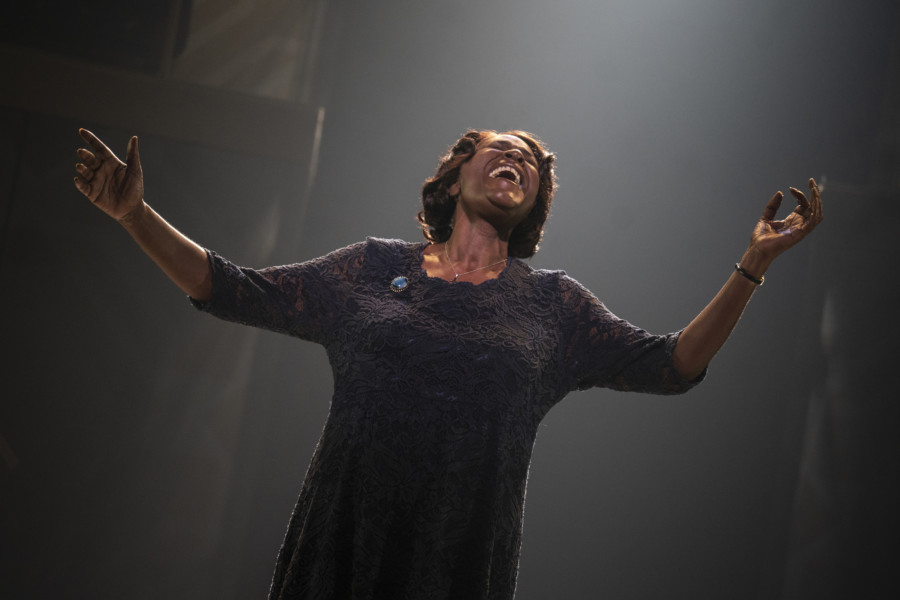 Caroline, or Change Misses The Mark

The music by Jeanine Tesori has many motifs taken from William Finn. You will hear Falsetto’s and New Brain, along with 60’s riffs and gospel hallelujahs. In Act 1 the musical numbers sound like the stopping and starting of a car. Melody? What melody?

The Second Act fares better when the title character played by Sharon D Clarke expresses her frustration in a song called “Lot’s Wife.” The audience applauds due to the fact it is the first time there is a semblance of a whole song. They also applaud to the last song “How Long Has This Been Going On” because after 2 hours and 15 minutes you get the point of this esoteric drivel.

Why am I talking all about the music? Because the entire piece is sung through. This show was commissioned by the San Francisco Opera. The good news is the vocals are extremely well done.

As for the story line, it is 1963, and Caroline Thibodeaux (Clarke), a 39-year-old divorced mother, works as a maid for the Gellmans, a Jewish family. She is paid a measly $30 a week, (In today’s money that is $268.93) doing laundry in a hot basement. Caroline is angry at the world and herself. She is sad, full of pain, bitterness, courage, never smiles, resenting, everything and anything. She does however, have a decency that gives a ounce of sympathy, but other than that Caroline is unlikeable.

Her companions are the washing machine (Arica Jackson), the dryer (Kevin S. McAllister), and the radio (a Supremes trio (Nasia Thomas, Nya, and Harper Miles). As she waits for the bus (the truly fabulous McAllister), the moon (N’Kenge) sings to her. Caroline has a chip on her shoulder as big as a boulder. She turns on her old friend Dotty (a winning Tamika Lawrence), envying and resenting her for going to college at night.

The Gellman’s nine-year-old son Noah (Jaden Myles Waldman) has lost his mother to Cancer and connects to the sadness he see in Caroline. He see her stronger than his father Stuart (John Cariani), a scientist and clarinet player. He has remarried to his deceased wife’s best friend Rose Stopnick (a understated Caissie Levy), who Noah does not like. Stuart effectively has checked out on both his son and his new wife.

Caroline lets Noah light her one cigarette and the boy loves her for it. Book writer Tony Kushner’s has stated that this is part autobiographical.

Noah, has a bad habit of leaving change in his pockets, so Rose decides that Caroline can keep the change, which Caroline’s pride has her feeling shameful for, but her feelings for her own children win out.

Civil rights, a statue of a Confederate soldier that has been decapitated and torn down and JFK has been assassinated all play a part in this convoluted storyline about all the meanings of change. “For change come fast and change come slow but everything changes! And you got to go!”

At Hanukkah, Noah is given a $20 bill and leaves it in his pants by Rose’s father Mr. Stopnick (Chip Zien). This New Yorker is opinionated. When Rose asks Caroline to help with the party, she enlisted Dotty and her daughter Emmie (a vibrant Samantha Williams) to help. At the table Mr. Stopnick, disagrees with Martin Luther King Jr.’s strategy of non-violence. Emmie, overhears and speaks up. When Caroline hears she is furious and fearful that Emmie is talking back to a white man and orders Emmie back into the kitchen. Mr. Stopnick replies “Lady, please, since I come South, she’s my first real conversation. Let her stay! “

Directed by Michael Longhurst, artistic director of London’s  Donmar Warehouse, Caroline, or Change originated at the UK’s Chichester Festival Theatre in 2017, then playing on the West End. The first act just drags on, while the second act picks up, but we never feel anything for our leading lady. Sharon D Clarke won the Olivier, but Tonya Pinkins performance was much more layered.

Fly Davis’ set design and costumes and lighting design by Jack Knowle are the highlight of this show.

Caroline, or Change is pretentious and as Emmie, sings “I’m the daughter of a maid, in her uniform, crisp and clean!
Nothing can ever make me afraid! You can’t hold on, you Nightmare Men, your time is past now on your way
get gone and never come again! You finally feel something but it is too little too late!

Suzanna BowlingJune 20, 2022
Read More
Scroll for more
Tap
Broadway’s Chicken & Biscuits Isn’t as Tasty a Meal as I was Craving
Dana H and This Is A Room Is Back on