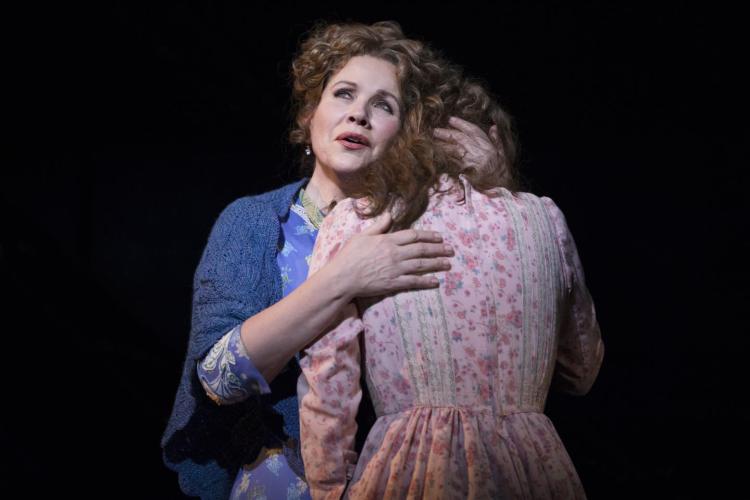 Carousel in the New Millennium

Carousel in the New Millennium 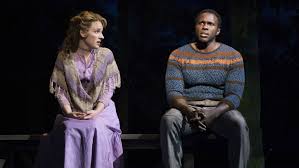 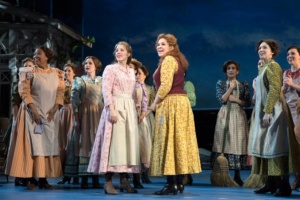 Jessie Mueller, Lindsay Mendez, and the company of Carousel. Photo by Julieta Cervantes

The new revival of Rodgers & Hammerstein’s Carousel is scrumptious and beautifully sung. Santo Loquasto’s glorious sets and Brian MacDevitt’s lighting put us right at the edge of a seaside in Maine, where a carnival is in full swing. As the carousel is lowered, the dancers have become the horses thanks to Justin Peck’s balletic choreography. It is here that Billy (Joshua Henry) and Julie (Jessie Mueller) meet. Keeping this production in a star-crossed romance is the celestial Starkeeper (John Douglas Thompson), who is in the shadows. When the carousel ride ends, the owner, Mrs. Mullens (a delightful Margaret Colin), threatens Julie and her best friend Carie (Lindsay Mendez). But despite Billy’s womanizing reputation, Julie finds herself unable to leave; she is so smitten. Winning Billy’s heart, the two marry, but Billy, unable to find work, has hit her. Julie tells Carrie about it, but Carrie has news of her own; she is marrying Mr. Snow (Alexander Gemignani). Carrie turns to her Aunt Nettie (Renée Fleming) for comfort. Right before the big clambake, Julie tells Billy she is pregnant. In his desperation to provide for Julie and their unborn child, he teams up with his best friend, the criminal Jigger (Amar Ramasar). During the crime, the two are caught and Billy slits his throat rather than go to jail. Billy is taken to see the Starkeeper who gives him the chance to make things right. He is given a day on earth to do something for his 15-year-old daughter Louise (Brittany Pollack). Billy, trying to show his love, tries to give her a star he has stolen. When she refuses, he hits her. She goes to her mother asking if a slap can sometimes feel like a kiss. Julie’s original response was, “Yes, darling, I believe that it is possible for somebody to hit you, good and hard, and for it not to hurt.” In this production, the line is cut, and she gives her daughter a look of understanding. It is when Louise graduates later that day that Billy is able to impart “You’ll Never Walk Alone” will get her through to the next day and the day after that. 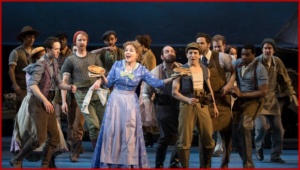 Renée Fleming  and the cast of Carousel Photo By: Julieta Cervantes

The vocal performances are exquisite. Renée Fleming singing “June is Busting Out All Over” and “You’ll Never Walk Alone” gets thunderous applause. Joshua Henry’s “Soliloquy” is layered and for the first time, I actually liked this song. He also does a wonderful job on the rarely heard “The Highest Judge of All.” What both lack, however, is connection. Jessie Mueller has a lovely serene presence. We believe she loves him, but it is hard to understand why. 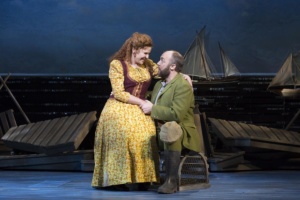 Lindsay Mendez as Carrie is a comedic spitfire. She brings oomph to the stage. Paired with the delightful Alexander Gemignani, the two steal the show. I wish they had not cut “Geraniums in the Winder” so Mr. Gemignani would have had more time on stage. He is the best Enoch Snow I have ever seen, and I have seen this show a lot. Amar Ramasar has made Jigger a little sexy and makes “Blow High, Blow Low” a rather exciting number. Brittany Pollack is a lovely dancer but does not look 15. 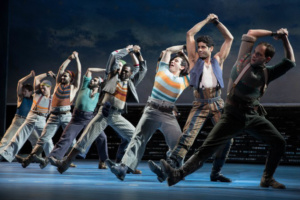 Amar Ramasar in the blue vest Photo By: Julieta Cervantes 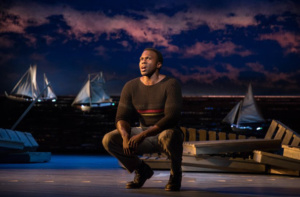 Jack O’Brien’s direction shows us how Billy’s judgments never truly let him evolve. He keeps missing the mark. I will be in the minority when I say I liked the fact that they did not try to gloss over Billy hitting both Julie and Louise. Though it is offensive, there are some women who love unconditionally despite the flaws in their spouses. Are we just supposed to erase what we don’t want to see? Julie’s second-act ballad, “What’s the Use of Wonderin’”, shows us sometimes love endures all things. 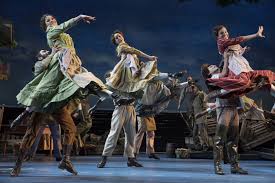 The choreography by Justin Peck and the costumes by Ann Roth seemed more like the production of Oklahoma! rather than Carousel. The orchestrations by the fabulous Jonathan Tunick soar, the dance arrangements by David Chase thrill, the vocal arrangements by Andy Einhorn are spot on, and the sound design by Scott Lehrer ensure that this is a heavenly musical experience.

Carousel examines forgiveness and the overwhelming power of love, and unless you are devoid of a heart, you will cry. My guest and I spent most of Act 2 in tears. Sometimes, elements in a show are so wonderful that you can forgive any of its flaws.

Suzanna BowlingSeptember 15, 2022
Read More
Scroll for more
Tap
Children of a Lesser God Explores the Sounds of Silence
One Thousand Nights and One Day Taps into the Universe and Captivates