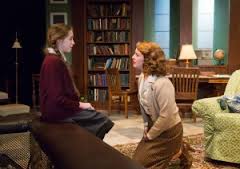 The Mint Theatre does it again with  Hazel Ellis’ Women Without Men, now playing  at City Center Stage II. Having lost their home, has not stopped this terrific theatre company. The sets by Vicki R Davis, are still exquisite, the costumes done to a tee by Martha Hally, the direction spot on by Jenn Thompson and the acting sublime. 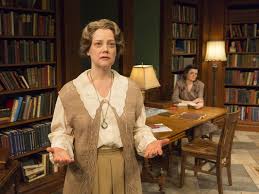 The play takes place at a Protestant all-girls boarding school in 1937 Ireland, where the all female faculty thrives on catty jealousy and backbiting malice to get through the boredom and lack of heat. For 18 years Miss Marjorie Strong math tutor (Mary Bacon), has kept her distance watching the rivalry play out. When new teacher Jean Wade (Emily Walton) enters the petty squabbles escalate. Miss Ruby Ridgeway  (Kate Middleton), resents her because she feels that Miss Wade has taken her place in being popular with the students. Miss Wade also has her own room while she has to share with Miss Willoughby (Aedin Moloney), an unattractive sour matron. They both pick on the overly sensitive French instructor (Dee Pelletier). From the very beginning, she clashes  the overbearing Miss Connor (Kellie Overbey), who has spent 20 years, practically her life on a book about beauty and the arts. Miss Conner haughtily informing her colleagues that none of them could appreciate it. After she clashes with Miss Wade her masterpiece is found in sheds and Jean is accused of the crime.

This play and this production is smart, clever and will keep you on your toes. Why it is called Women Without Men, is actually beyond me because this show is about women surviving other women’s pettiness due to low self esteem and fear of growing older and being out out to pasture.

The cast is spectacular with winning moments by each one including the three students Shannon Harrington, Alexa Shae Niziak and Beatrice Tulchin.

Ms. Ellis based the play on her own experiences at the French School, Bray, founded in 1864 by French aristocrat Heloise de Mailly and remained open until 1966. Starting off as an actress playing some of the most prestigious Irish theatre in 1929. In 1936 she stunned the Dublin Theatre work when she wrote two plays. I hope the Mint revives Portrait in Marble if it is as good as Women Without Men.

In watching this show, plays like Lilian Helman’s The Children’s Hour and The Prime of Miss Jean Brodie come to mind. We can see where Women Without Men, came from and other authors who studied it’s form. Thank-you to The Mint for this wonderful afternoon in the theatre.

We can all learn from the way Ms Wade handles the situation at hand.