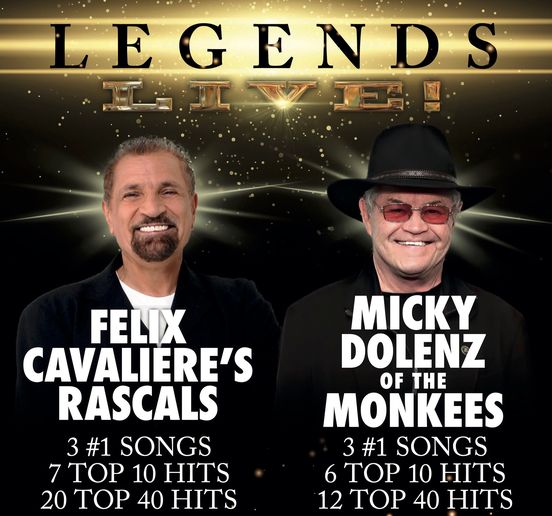 Early in 1965, Cavaliere formed the ‘Young Rascals’ with Dino Danelli, Eddie Brigati and Gene Cornish. That October, they caught the attention of promoter/manager Sid Bernstein with their high-energy set at Long Island’s elite club, Barge. Signed to Atlantic Records, and now called The Rascals, the mega hit “Good Lovin’” struck No. 1 in February 1966. They followed suit with a string of hits like “I’ve Been Lonely Too Long,” “Groovin’” (No. 1 in 1967), “How Can I Be Sure,” “A Girl Like You,” “A Beautiful Morning,” and “People Got to Be Free” (No. 1 in 1968). The Rascals are considered the best ‘blue-eyed soul’ group to come out of the 1960’s, as well as one of the groups with the most record sales.

Originally conceived for television audiences in 1965, The Monkees aired for two seasons (52 episodes) on NBC. The situational comedy centered on a band trying to make it big, featuring Dolenz, Michael Nesmith, Peter Tork and Davy Jones. The show was an instant double-barrel smash catapulting both the show and music headfirst into pop culture.

Both the show and music were again launched to the public forefront when MTV aired reruns in the 1980’s. And, the group’s reunion tour in 1986 was on the the year’s highest grossing tours.

Dolenz can be heard on the smash hits “Last Train To Clarksville”, “I’m A Believer”, “I’m Not Your Stepping Stone”, “Pleasant Valley Sunday” as well as the theme song to the TV show. Other Monkees’ top hits include “Daydream Believer”, “Valleri” and ”DW Washburn.”

Dolenz is fresh off the 41-date The Monkees Farewell Tour.

The tour will begin in January – January 22 at The Palladium in NYC.