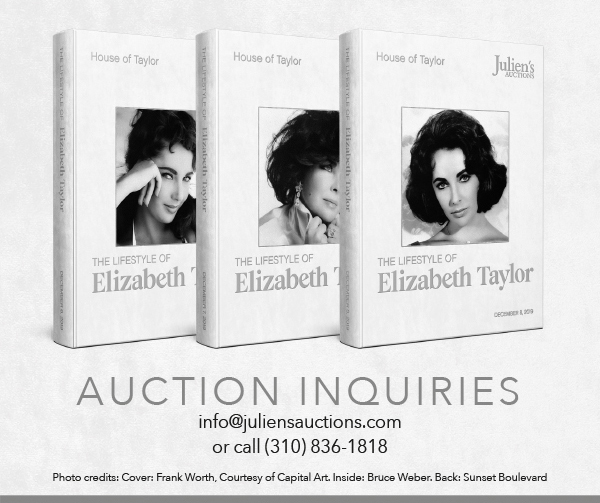 This three-day event celebrates the luxurious lifestyle and singular career of one of the greatest Hollywood legends of all time, Elizabeth Taylor. This spectacular collection of over 1,000 item provides an intimate look at the private world of the three-time Academy Award-winning actress and humanitarian who dazzled the world with her ravishing beauty, larger than life celebrity persona, and fearless activism in the fight against HIV/AIDS.

Her iconic fashions, film costumes and accessories, by designers Christian Dior, Edith Head, Gucci, Nolan Miller, Oscar de la Renta, Valentino, Versace, Yves Saint Laurent, Louis Vuitton as well as her fine costume jewelry, fine/decorative art and household items from her residences around the world, as well as her most personal pieces from her life and love, Richard Burton and her friends, Michael Jackson, Carrie Fisher and more will be on offer.

100% of the proceeds from the sales of the Limited Premium Collector’s Edition of The Lifestyle of Elizabeth Taylor catalogue sets will benefit The Elizabeth Taylor AIDS Foundation (ETAF) and is available exclusively at www.JuliensAuctions.com.

Suzanna BowlingSeptember 15, 2021
Read More
Scroll for more
Tap
BAM’s The End of Eddy and St. Ann’s History of Violence Collide and Enliven
December is Full of Events To Make You Ho Ho Ho