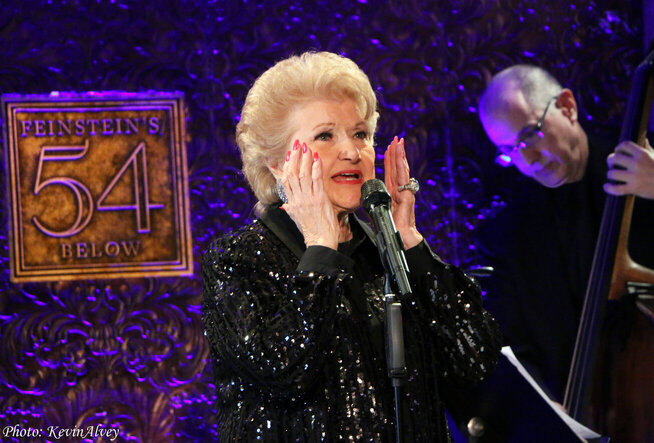 On April 10, 2021 Marilyn Maye turned 93. She celebrated her big day at the Wick Theatre in Florida. For New Yorker’s and for those who can stream, Marilyn premieres Broadway, The Maye Way, as part of the 54 Below Premieres series tonight Saturday, May 8, 2021 at 7 PM ET and continues on-demand through June 19.  Filmed at Feintstein’s/ 54 Below Marilyn has never seemed more at home.

Watching Ms. Maye is like taking a master class in singing and phrasing. She has her own style and makes every lyric come alive with nuance. This show is a must for anyone who wants to sing or just loves music.

Starting off with the Jerome Kern/ Oscar Hammerstein classic “The Song Is You,” Maye proves that not only is the song you but music is her soul.

Sondheim’s “Old Friends,” is phrased in such a new way, that I felt like I was hearing the lyric for the first time and I knew it well.

A robust version of Peggy Lee’s and Bill Schluger “I Love Being Here with You,” and the Arlen/ Mercer classic “Any Place I Hang My Hat is Home” followed.

Did you know that Maye was the first to sing Kander and Ebb’s “Cabaret”? One of her biggest hits “Step to The Rear” by Elmer Bernstein and Carolyn Leigh from How Now Dow Jones was used for a car commercial and gave her “four wonderful, residual years,” was used for several political campaigns and even got a man elected.

Ms. Maye played Dolly Levi for three weeks at Starlight Theater in Kansas City and went on to keep on playing her for four more years at different theaters. The audience was treated to Jerry Herman’s “Hello, Dolly!,” “Ribbons Down My Back,” and “Elegance” with a brief appearance by the man who played one of her Barnaby’s.

Maye’s favorite show after Hello, Dolly! and Mame, which she also performed in is My Fair Lady.” The Alan Jay Lerner and Frederick Lowe tunes “I’ve Grown Accustomed to His Face,” “Wouldn’t It Be Loverly” and “On the Street Where You Live,” were given Maye way arrangements.

Next was a smile section, something we can all use right now. “When You’re Smiling,” “Pack Up Your Troubles,” “Smile,” “Your Smiling Face,”“I Love to See You Smile” and “Put on a Happy Face,” ranged era’s and styles, yet were cohesive and welcomed.

For me the next four songs were the highlight of the evening. First up was “Fifty Percent” from the Marilyn and Alan Bergman and Billy Goldenberg Broadway show Ballroom. I have longed to see this show revived and after hearing Marilyn sing this, I want to see it even more. She captured the song perfectly.

Walter Marks’ song “Golden Rainbow” has Maye at her best. This arrangement is so fabulous and her phrasing so unique and spot on that I could have listened to it over and over.

Then came the classic Stephen Sondheim song “I’m Still Here” from Follies. I did not know that Maye had played Sally in Houston and Carlotta in San Diego. After hearing this laid back, nuanced version I am so sorry I missed these performances. Thankfully I got to see a part of it here.

Closing off the show was “It’s Toady” from Mame.

Maye is backed by the remarkable Tedd Firth on piano. He is her musical director and also does her piano arrangements. There is no one better than Mr. Firth. On bass Thomas Hubbard and on a mean drum Mark McLean.

The show directed by Cody Williams was a little talky, but highly relatable.

Maye delivers all 24 songs brilliantly and her way. I was satisfied to the hilt and you will be too.

Stephen SorokoffOctober 5, 2021
Read More
Scroll for more
Tap
Jeremey Jordan Bares His Soul in Carry On
What to Watch in The New Year: May 9