Celebrating the 60th Anniversary of Curtis Mayfield in Music

Celebrating the 60th Anniversary of Curtis Mayfield in Music 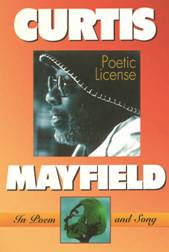 The Songwriters Hall of Fame (SHOF) is including a Curtis Mayfield Award in its scholarship program as part of its Annual Induction & Awards Gala week of events held June 15 in New York City, it was announced today by Atlanta-based Mrs. Curtis Mayfield.

The Curtis Mayfield Award recognizes a promising singer/songwriter whose work reflects the inspiration, spirit and soul of Curtis Mayfield.  “It’s time to celebrate and re-evaluate Curtis’ legacy,” adds Mrs. Mayfield.  “For years, too many others have tried to claim what he alone did—he was a genius, always stood on his own.” If there was ever a poet in music, it was Curtis Mayfield, whose career was launched 60 years ago this year, at age 14 years-old, singing with and writing for The Impressions.

Only recently, the New York Times called him, Soul’s “Genius of Gentleness” and in the words of Aretha Franklin, who was produced by Mayfield, “Curtis Mayfield is to soul music what Bach was to the classics and Gershwin and Irving Berlin were to pop music.”

Before his death 17 years ago, Mayfield wrote over 1,900 songs, many of them iconic and many of them the soundtrack for the civil rights movement, like “People Get Ready.”

As he lied in bed after a stage accident that left him permanently bedridden, the ever restless Mayfield decided, at his wife Altheida’s urging, to pen a book of poetry based on the lyrics of his many songs.

On the 20th anniversary of its first publication, “Poetic License” is being rereleased in a handsomely redone paperback edition featuring Mayfield’s poems and David Soto’s beautiful drawings.

According to Soto:  The pioneering singer, songwriter, and composer compiles more than sixty of his favorite song lyrics in a collection that spans four decades of his career and includes the poetic words of “Gypsy Woman,” “People Get Ready,” and “Sparkle.”

“Broke his spine, but not his spirit,” says Altheida Mayfield, mother of his seven children.

In 1996, despite his physical handicaps, Mayfield released his 22nd solo album, “New World Order.” In his own words: “How many 54-year-old quadriplegics are putting albums out? You just have to deal with what you got, try to sustain yourself as best you can, and look to the things that you can do.”

For years, the Mayfields left untouched the singer-songwriter’s repository of memorabilia, notes, artworks and artifacts but in preparing to launch new recording and film projects bearing his name, a newly discovered cache of material was discovered, among these gems is Poetic License, which is being rereleased as a limited edition publication (purchase at www.curtismayfield.com).

Along with his many Grammy® awards, the last one a Lifetime Achievement Award presented by Bruce Springsteen, Mayfield was also an early inductee into the Rock ‘n Roll Hall of Fame (solo as well as group) and is one of Rolling Stone’s 100 Greatest Artists of All Time.

The Curtis Mayfield story is, indeed, wide ranging, as he started writing a different kind of soul music, one that crossed more than just musical boundaries, songs such as “Keep On Pushin’” and “People Get Ready,” reflecting his awareness of political and social concerns among black people. Martin Luther King embraced this side of Mayfield’s work, adopting Mayfield’s ”Keep On Pushin’” as an unofficial anthem while “People Get Ready” was second to “We Shall Overcome” on Washington civil rights marches.

“Superfly” took Mayfield into Hollywood movies, where he again made some changes to the status quo. “Superfly,” the soundtrack to a celebrated blaxploitation movie and filmed on location in HARLEM, turns 45 in July and was Mayfield’s biggest album and another big brick in his wall of fame.

He wrote, performed and produced it himself, surprising the movie studio heads.