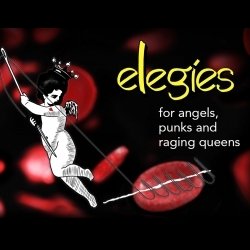 As the second wave rages around the world, a fundraising streamed production of the 1989 musical, Elegies For Angels, Punks and Raging Queens, finds utter brilliance in both its timing and form. The touching take on this beautifully poetic musical, with music by Janet Hood (Unexpected Joy) and lyrics and book by Bill Russell (Pageant; Side Show), finds its magnetic power in its smart realignment for today’s other pandemic. It rages and engages, in its effortless spark, finding the heart and soul within its sorrow, and fire in its fight.

The work, presented here to raise funds for BCEFA, was originally inspired by the NAMES Project AIDS Memorial Quilt. It finds its way to dig into the meat of the matter clearly and concisely, weaving within the two hour production a number of highly engaging monologues, written from the perspective of characters who have died from AIDS, alongside tender dynamic songs emanating from their friends and family members struggling to find their way through grief. Structured much like Edgar Lee Masters’ Spoon River Anthology, Elegies soars like the angels, punks and raging queens it represents, thanks to the dedication and extreme talent of all those involved, finding power in the parallel, while deftly taking us back to that terribly sad time, without ever letting us forget what we are experiencing now with this other deadly pandemic.

From that first magnificent titular number, “Angels,Punks and Raging Queens“, sung from the heart by the phenomenal Lena Hall, the production weaves its way into our soul. I was not expecting this level of emotional power at all, when I first signed on to the Broadway Cares/Equity Fights AIDS YouTube channel to partake in another fundraiser. But the piece, which was first developed in the late 1980s and originally titled “The Quilt“, delivers on every level you could hope for, especially with that first monologue performed by Nathan Lane (Broadway’s Angels in America), specifically written for this timely presentation. The connection is clear, and the effort, not forced. Produced first at the Ohio Theatre in Soho, NYC in 1989, where the new title, Elegies, was adopted, this piece of musical theatre found its heart in the center of a community devastated by AIDS epidemic and continues onward and upward.

I can’t begin to tell you the number of times tears came to my eyes. Glick (Broadway’s To Kill a Mockingbird) and Mueller (Broadway’s Waitress) pair up to deliver one such perfect moment, “My Brother Lived In San Francisco.” It simply is magnificent, but no more than any other of the solidly sewn moments within this dynamic piece of theatre history, ending with the finale, “Learning To Let Go” lead by Norm Lewis (NBC’s Jesus Christ Superstar Live), which is all kinds of wonderful; both heavy and fulfilling. Don’t miss this opportunity (like I almost did) to engage and feel these feelings. I had never even heard of this musical, but now I can’t wait to listen to these songs over and over again, especially as sung by these tender souls on this streaming broadcast. This virtual production of Elegies For Angels, Punks and Raging Queens, featuring all these fantastic performers from Broadway, television, and film donating their time, energy, and heart to benefit BCEFA, is one of those moments you just can’t miss (or not donate to). Created in response to one pandemic and revived for another, the production and musical fits the streaming format with effortless and magnificent ease, demonstrating the perfect combo of story, structure, and system, just like it must have back in the day of that other pandemic, AIDS. Dive in, and be swept away by the joy and the heartache felt by all walks of life that live inside Elegies. It’s truly a journey worth taking.

Watch the free stream beginning at 5 pm Eastern on December 1st, World AIDS Day by clicking here. The stream also will premiere at 5 pm and 8 pm Eastern on Broadway On Demand. The show will be available through Saturday, December 5. This stirring and beautiful piece of theater finds new meaning amid these current COVID19 difficult days. The streaming of Elegies for Angels, Punks and Raging Queens, artfully directed by Bill Russell and Justin Ross Cohen has been produced by Jim Kierstead and Broadway Virtual, Jim Head, Sainty & Eric Nelsen, Rusty & Molly Reid, The Worx Productions LTD, Linda Karn, Daniel Mitura/Jill Steinberg, Ann Moore/Jane Furse, and Justin Ross Cohen, in association with The Abingdon Theatre Company (Chad Austin, Artistic Director). Music direction is by Janet Hood and casting is by Stephen DeAngelis.

The stream is free and donations will be accepted for Broadway Cares/Equity Fights AIDS. Every dollar donated will help those across the country affected by HIV/AIDS, COVID-19, and other critical illnesses receive healthy meals, lifesaving medication, emergency financial assistance, housing, counseling, and more. The donations also support and champion organizations focused on social justice and anti-racism, so please donate by clicking here: broadwaycares.org/elegies2020