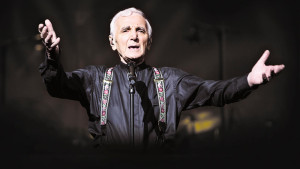 Legendary singer Charles Aznavour is returning to the Theater at Madison Square Garden on Saturday, October 15, 2016 at 8:00PM. With a career spanning over 70 years and thousands of concerts, Charles Aznavour continues to perform at major venues across the globe and has sold over 180 million records, with 1,200 songs and 294 albums released during his prolific career. Aznavour has performed and recorded in eight languages and in 94 countries alongside some of the most famous entertainers of all time including Edith Piaf, Frank Sinatra, Ray Charles, Andrea Bocelli, Sting, Celine Dion, Josh Groban and Bob Dylan. 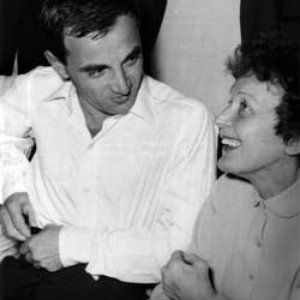 Discover by Edith Piaf, Aznavour is a recipient of the MIDEM Lifetime Achievement Award and a member of the Songwriters Hall of Fame, with scores of albums certified gold, platinum and diamond. A singer, songwriter, entertainer, actor, author and humanitarian, Aznavour was named “Entertainer of the Century” by CNN/Time Online in 1998. As a result of his humanitarian efforts, Aznavour received the title of National Hero of Armenia, the country’s highest honor, and is an Ambassador and Permanent Delegate of Armenia to UNESCO.

T2C’s Magda Katz had a chance to ask and learn about this truly gifted musician and we share this with you.

T2C: Your song  “What Makes a Man a Man” was written so far a head of it’s time. What made you write it and was the process?

Charles Aznavour: I’m always attracted by difficult subjects or themes that no one has tackled before. Over the years I had met a lot of gay people, some were friends or collaborators, and I use to hear them talk  about their life, the difficulties they had with relationship so in 1972 I wrote “What Makes a Man! ” I remember the first time I played it to my entourage on the piano, when I finished the song, an eerie silence followed, till someone said “and who’s gonna sing this? ” I said “Me!” Needless to say everyone was shocked! Everyone tried to persuade me not to do it saying it will be the end of my career, that I will be crucified by the press and the public!  I ignored everyone and recorded the song and sung it on stage, at first it was not easy to impose the song as it was “a taboo” subject, but for me it was important to accept and respect the right to be different! And as I demand that my songs are translated with exactly the same lyrics, I started to sing the song all over the world in Spanish, English, Italian and still do, because now the song has become one of the key song of my repertoire that cannot be overlooked!!

I was  ahead of time and I was proved right!  I am very proud of that song ,and the way the public adopted it

T2C: Your songs tell stories. Where do you get your inspiration?

Charles Aznavour: Everywhere, I read a lot, I observe people around me, I am not scared of words or subjects! But I always try to find a different angle, a new story!

T2C:. Do you have a favorite American composer, song or artist? 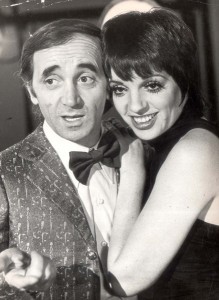 Charles Aznavour: Too many to name, Gershwin, Irving Berlin, Cole Porter, Sondheim, Bernstein, Rogers and Hammerstein, Bob Dylan, Leonard Cohen. My friends Liza Minelli, Sinatra, Sammy Davis and Quincy Jones. And people I would love to work with  like Aretha Franklin, Barbra Streisand. I have known her for years but we never worked together, Lady Gaga, Stevie Wonder, Beyoncé, Usher, Cher, Bette Midler and many more …

T2C: You have had such a long successful career. What still motivates you to take on world tours?

Charles Aznavour: It’s my life! I love to perform, write. To travel the world and meet the public is fantastic for me! I guess I have been very lucky that my songs stood the test of time and it’s really great to see an 18 year old tell me, I can identify with any of my songs, some I’ve written over 60 years ago! We do very big venues all over the world and it goes without saying that if I didn’t have a new generation coming to see I could never do what I do and that’s exciting!!

T2C: What moment in your life has effected you the most?

Charles Aznavour: A lot of them. The loss of my parents, was very traumatic as we were a very close nit family. The loss of my son Patrick, or my brother in law George Garvarentz who was a very talented composer and my main collaborator for 40 years !!

T2C:  What is your favorite memory with Edith Piaf?

Charles Aznavour: Too many! I stayed 8 years with her! I managed that length of time because we were never lovers!! She thought me lot, how to listen to a song, stage presence, the respect of the public!

T2C: Songs are like children, do you have a favorite and why?

T2C: You write about human frailty, what do you think of all of the ones we have is the most inspirational for you as a songwriter?

Charles Aznavour: We are not perfect and if you manage to express sentiment and feelings that other feel , then they can identify with your song and see themselves in it or claim to know someone who is just like that !

T2C: You have seen so much in your life, what has been the biggest surprise?

Charles Aznavour: Professionally, is the fact that despite what everyone said about me at the beginning, he is small, ugly, has a broken voice, writes depressing songs, he will never succeed, I proved everyone wrong and I am still here!! On a private matter that I have been with my Ulla for nearly 50 years and I have great children and grandchildren!!

T2C: What would you like our readers to know most about you? 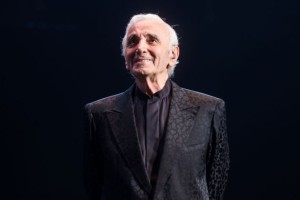 Charles Aznavour: I love America. I first came in 1948 and since it’s an everlasting love story between us! America has been very generous and welcoming and I love to come back and perform over here!  I am very excited with my forthcoming dates, New York on October 15, Boston on the 18th, Miami on the 25th and Los Angeles on the 28th. Hope to see all there!