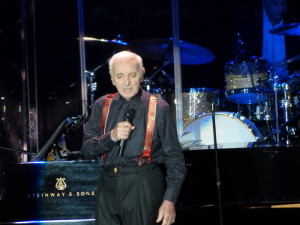 Charles Aznavour, the iconic performer who has written the lyrics and collaborated on the music for 1400 songs wowed his audience at Madison Square Garden, Saturday evening. Aznavour generated energy and vibrance to a sold out crowd who cheered and gave him a standing ovation at the conclusion of his 1 and 1/2 hour show where he sang and moved with lithe grace reminding us that it is never too late to be great. When you think that this 92-year-old has sold millions of albums, numbering millions more than Michael Jackson and outliving critics of his early career who scoffed he would never make it, it is a reminder to all of us. You are as young as you feel. Hats off to Awesome Aznavour! 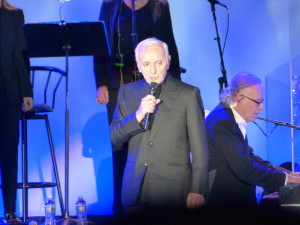 Aznavour, sang in French, Italian, Spanish and English. He sang his hits which included; “She,” “Yesterday When I Was Young,” “La Mamma,” his own rendition of “Ave Maria,” and his signature song, La Bohème, during which he threw his white handkerchief to the fans, one of whom managed to grab it and waved it triumphantly. He also sang a duet with his daughter, Katia, who is a backup singer in his band. The song was “Je Voyage,” and is about an old man and a young girl who meet on the road. The moments that Aznavour held you in his spell were “Dance In The Old Fashion Way,” which was breathtaking with his back to the audience as he danced with a invisible women. In “What Makes A Man a Man,” he sang it for his gay friends and it was emotionally heartbreaking.

Aznavour’s songs are known for their difficult vocal range – and at times he struggled to reach some of the particularly high notes, but he made up for for it with charm, emotional connection and showmanship.

This audience danced out with a new renewed love of the French icon who proved he still has it at any age.

Video and photos by Magda Katz.