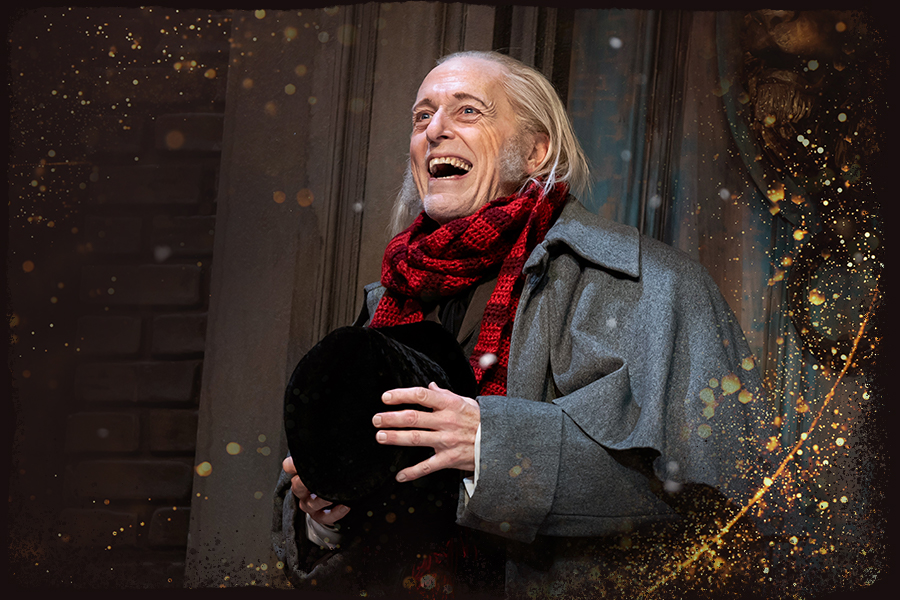 Now that the calendar is down to a single page, it really is beginning to look a lot like Christmas around the Windy City. The lions guarding the entrance to The Art Institute have been officially spruced up with traditional evergreen wreaths for the 30th time. After a year off due to the pandemic, the Christkindlmarket Chicago is once again opened at the Daily Plaza, absolutely brimming shoulder to shoulder with performers and activities. Most importantly, the Goodman Theatre is once again staging their annual Charles Dickens’ A Christmas Carol live in front of a full, mask wearing and proof of vaccination validated audience. Directed in its 44th season for the first time by Jessica Thebus, her vision certainly blew the dust off of previous incarnations of this same material and welcomed so. This tale of redemption, demonstrating its own really, with a script adapted by Tom Creamer, will charm all. Inserting more music, more warmth and more heart into an already beloved holiday tradition, the Goodman is demonstrating it has no intention of resting on its laurels in Robert Falls’ final season as Artistic Director.

Beloved character actor, Larry Yando, is back for his fourteen go-around as the ever-persnickety Ebenezer Scrooge, gleefully chewing up the scenery each time he emerged on stage. Heidi Sue McMath’s delightful and colorful costumes perfectly punctuated each performer, with period accurate care, but the real marvel this year is the redesign on the Ghosts of Christmas Past and Present. Performance artist, Lucky Stiff, a glitter dipped harlequin Ghost of Christmas Past and Bethany Thomas, adorned in a gown of holiday holly and leaves, it would be impossible not to see the indomitable Thomas as nothing short of Mother Earth herself. There was an audible collective gasp amongst the audience in her Act 2 opening scene debut.

Paying homage to the indigenous people who populated the Northern American region well before the British colonization, the Ghost of Christmas Future (Christopher Sheard) was a bold 8-foot crested crow that would give even Moira Rose (Catherine O’Hara’s Emmy Award-winning character from Pop Television’s hit Schitt’s Creek to those not in the know) pause. The powerful scolding scene between Scrooge and Thomas’s Ghost of Christmas Present, accented by 2 child actors representing Ignorance (Grier Burke) and Want (Rika Nishikawa) was so clearly borrowed by the horror film “US” I was surprised Academy Award-winning actress, Lupita Nyong’o, wasn’t given special credit in the Playbill.

As for the play itself, the cast continued the honored tradition of color-blind casting, this year adding same-sex couples to the mix, but not so obtrusive that it felt like one was being beaten over the head with it. This is my colorful way of saying this production is still charming enough to warm the hearts of the most closed minded and bigoted patrons, although hopefully they are not sitting directly next to you in the audience. Scrooge’s boisterous boss Mr. Fezziwig is now Mrs. Maud Fezziwig (a rousing Cindy Gold) without missing a single, fun-loving beat. Gayatri Gadhvi made her debut as Cratchit’s youngest child, Tiny Tim, blessing us all by the tale’s conclusion.

Then there was the music. There isn’t a full orchestra accompanying the action, instead the actors played their instruments live on stage immersed as part of the narrative. Gregory Hirte returning to the Goodman’s festivities once again easily recognized with his astute and fierce fiddle playing, Justin Amolsch, elegant on the French horn, Maddi Ruhl adding whimsy on flute and piccolo and Malcom Ruhl bringing it home on the accordion and guitar. Much welcomed vocals were added by Holly Hernandez, Bethany Thomas and Ariana Burkes and the show is only evermore enhanced by the addition of these three Christmas Chanteuses.

It wouldn’t be A Christmas Carol without the astonishing high-flying antics of Ebenezer and company, with Flying Effects provided by the team at ZFX. Todd Rosenthal’s multiple level, rolling set design continued to impress, from the transforming lion head door knocker to Ebenezer’s levitating bed, by which we first meet the specter, Jacob Marley (Kareem Bandealy) wrapped in chains and floating on a cloud of mist. One could almost smell the fresh turkey cooking in the oven during the Cratchit family’s dinner scene.

Truthfully, this is my seventh season attending The Goodman’s Charles Dickens’ A Christmas Carol, but the first with Thebus as the helm. Her timely updates both welcomed and warranted, subtle while simultaneously sublime. As the world evolves, so should the mirror which reflects that world back to us. This is a story that at one time was presented lily white, but now told with a cast reflecting not only the audience watching it, but the scope of artists auditioning and constructing the story as well. Kudos to that required and necessary update. If you are looking to cautiously return to your familial holiday traditions, The Goodman’s Charles Dickens’ A Christmas Carol is as safe and as good as you can get.

Charles Dickens’ A Christmas Carol is now playing at the Goodman Theatre through December 31, 2021. GoodmanTheatre.org 312-443-3800