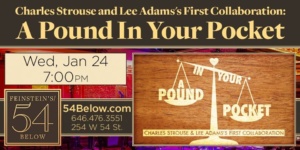 Feinstein’s/54 Below will present the rarely heard musical A Pound in Your Pocket as part of its popular Second Act Series on Wednesday, January 24th at 7:00pm. The very first collaboration from acclaimed songwriters Charles Strouse and Lee Adams, best known for Bye, Bye, Birdie and Applause.  A Pound In Your Pocket is a delightful, Dickensian story about friendship and redemption. Strouse will be on hand at the one-night-only concert to greet fans and sign copies of his memoir, Put On A Happy Face.

Best known for his Tony Award-winning score for Annie, there may be no other living composer whose work is as integrated into the popular culture. A three-time Tony Award-winner, Charles Strouse’s music has touched the life of almost every American in the last half century. From the classic “Once Upon a Time” to the rocking score of Bye, Bye, Birdie (Tony Award), his celebrated songs are an essential part of the American songbook. A graduate of The Eastman School of Music, Charles studied composition with Aaron Copland, and Nadia Boulanger. Like most composers, he found himself playing in bar rooms and strip-clubs (a particular boon for one who was to write the music for the film The Night They Raided Minsky’s). Having previously composed chamber music, two piano concertos, a string quartet and two operas, Charles met Lee Adams, with whom he would collaborate on more than ten musicals including It’s a Bird… It’s a Plane… It’s Superman, (Tony nomination), Golden Boy (Tony nomination) and the Tony-winning Applause. Charles has received the Richard Rodgers, Oscar Hammerstein, and Leonard Bernstein awards for musical achievement. In addition to Adams, Charles has collaborated with an array of celebrated songwriters such as Alan Jay Lerner (Dance A Little Closer), Sammy Cahn (Bojangles), Stephen Schwartz (Rags), Hal David (Lady For A Day), Richard Maltby, Jr. (Nick and Nora) and more.

When Strouse first met Adams, 1949, neither knew what would happen next. 68 years and three Tony Awards later, Strouse and Adams are one of the most celebrated and prolific teams in musical theatre. Now, an all-star cast will celebrate their very first collaboration, the delightful and rarely heard A Pound In Your Pocket. With a delectable score that launched Strouse and Adams’ legendary career and an all-star cast, the charming and intimate musical is sure to be considered a newly-discovered classic to warm your hearts this winter.

For one night only, on Wednesday, January 24th, 2018 at 7:00pm, audiences at the famed New York supper club will have the rare opportunity to hear a seldom-sung score by two of the American musical theatre’s most acclaimed writers. Based on the classic Charles Dickens novel The Old Curiosity Shop, the comedic musical centers around Dick Swiveller. A congenial, boozy, soon-to-be-heir to a family fortune, Dick takes a job as a law clerk while waiting to come into his inheritance. When he befriends the lonely servant girl of his corrupt employers, the unlikely duo overcome greed, malice, and injustice through a series of topsy-turvy plot twists.