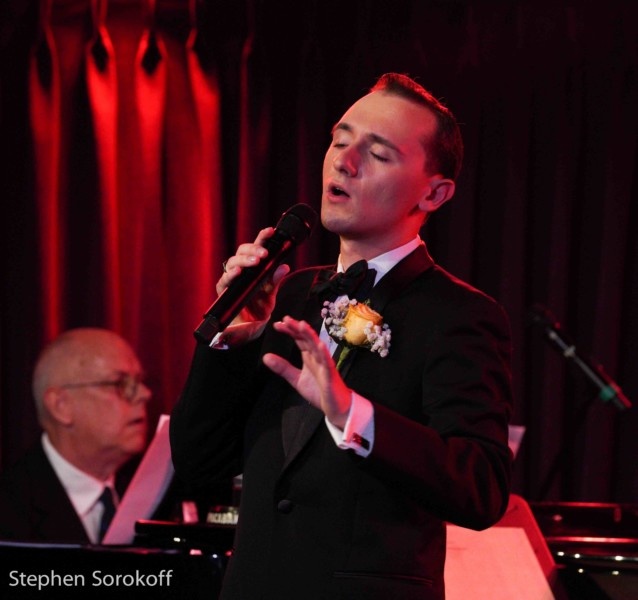 In Roman Candle: The Ultimate Bobby Darin Experience starring Charlie Romo at The Green Room 42, one feels as if this legendary icon is standing in front of you. Many have forgotten who Bobby Darin is but in his short life he accomplished more than most performers today. Darin was a singer, songwriter, multi-instrumentalist, actor in film and television. He performed jazz, pop, rock and roll, folk, swing, and country music.

Starting with his amazing band Charlie took to the stage with “Hello Young Lovers” into “Beyond The Sea” and “As Long As I’m Singing”. This young performer who I have been watching for a year, has done something amazing. He has grown from a singer into a bonafide performer with confidence and an ease that is rare.

During the show Romo took us into Darin’s life. Launching into “Splish Splash” we learned that Darin’s career finally took off in 1958 when he recorded this song. He co-wrote the song with radio D.J. Murray Kaufman and within one hour, “Splish Splash” was written. The single sold more than a million copies.

Darin was originally known as a rock and roller as we were treated to “Early In The Morning” and “Queen of The Hop”.

“Dream Lover”, “That’s All”, “Some of These Days and ” As Long As I’m Singing” showed off Romo’s lyrical appeal.

With the same intro “Hello Dolly”, “Gyp The Cat”, “Danke Schoen” and “Mack The Knife” sounded like the same song. “Mack The Knife” went to No. 1 on the charts for nine weeks, sold two million copies, and won the Grammy Award for Record of the Year in 1960.

In attendance were Jimmy Scalia – Official Archivist of The Bobby Darin Estate and Jack Urbont, composer of “Manhattan In My Heart,” written in 1965 with lyrics by John Meyer and recorded by Bobby Darin in 1966, never released. For the first time this marvelous song was finally heard. If these two men were smart, they would take the footage of Darin singing this and pair it with Lady Gaga or a new theme song for Manhattan. Hey it worked for Natalie and Nat King Cole.

Lapsing into a country mode “Artificial Flowers” (a song by Sheldon Harnick and Jerry Bock from the Broadway musical Tenderloin, about the death of a child laborer) and “18 Yellow Roses” hit the air.

In the 60’s Darin was not only known for his film roles but for the scores he wrote. The Theme “From Come September “, “If a Man Answers” and “That Funny Feeling” featured Romo’s fantastic band. If I had one criticism about Romo is that he never fully introduced us to this band that was outstanding. They include His musical director Jeff Harris on piano, Jon Burr on bass, Howie Gordon on drums, the amazing Jack Cavari on guitar, Steven Frieder on tenor sax/alto sax/flute, Tony Gorruso on trumpet and Malec Heermans on trombone.

Wanting to give back Darin’s “Work Song” and “Simple Song of Freedom” spoke to todays political unrest.

Darin married Sandra Dee and they divorced seven years later. He died at age 37. As Romo crooned “Lazy River” and finally sang the complete version of “Once In A Lifetime”, I was struck by how much alike the young Romo and Bobby Darin are. Both have incredible talent, showed promise early and seem destined for more. It was so refreshing to watch this performer grow into his own and I recommend trying to find out when he is performing next.