Charlie Romo The Frank Sinatra of This Generation

Charlie Romo The Frank Sinatra of This Generation

My friends insisted I had to see this up and coming singer Charlie Romo, but I was booked out. They kept at me and I am so glad they did. Thanks to Bernie and Joanne Furshpan and Marya Coburn, I headed to The Triad to watch a remarkable 21 year-old channel Frank Sinatra, Dean Martin, Bobby Darin, Tony Bennett, Elvis Presley, Bing Crosby, Don McLean, Buddy Holly, Richie Valen and K.I.S.S. This natural born entertainer has a has a stage presence that transfers to the audience, winning them over within moments of hearing him open his mouth. He is personable and has that elusive “It” factor. It is no wonder he has already a finalist in the 2017 NYC MAC Award, Best Male Debut Artist and the winner of Broadway World’s 2016 Best Debut Show. What is so remarkable, is that each of the singers he emulates, not only does he capture their style, but adds his own brand of  showmanship, so that it is a perfect blend of the artist and his own personal  interpretation. 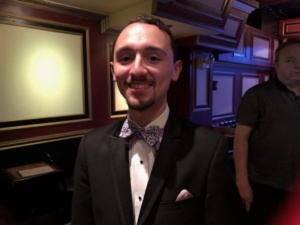 The show consists of  classic American songbook titles like “As Long As I’m Singing,””Just In Time,” “Once Upon a Time”, “Let Me Try Again”“The Good Life,” “What Kind of Fool Am I?,  blended with an emotional “American Pie,” and “Beth”, which he sang to his father. This young performer knows how to seduce his audience with song and they respond in kind. Romo also does something wonderful, while not changing the feeling of these songs he gives them a new infusion of life. Part of this comes from the arrangements by the late, great Barry Levit. Until Barry’s death he was backed by his band, now the amazing Daryl Kojak Band swings with him. These pro musicians consist of Jack Cavari  (guitarist for Shirley Bassey, Liza, Old Blue Eyes), Ronnie Zito  (Bobby Darin’s drummer), Jon Burr (bassist, formerly with Tony Bennett, Chet Baker)​ and Daryl on piano. You could not ask for a better band to back you. The musicality on that stage was stellar. 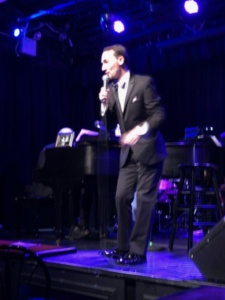 Romo has it all, stage presence, a warmth that extends out the room, personality, patter that seems natural, an ease that radiates and pitch-perfect technical mastery. He has an understanding of lyric and his interpretation is a joy to behold.

I walked out of The Triad, knowing I had witnessed a star on the rise. I can not wait to see him on the Broadway Stage, in concert halls and where ever else this musical journey takes him. He is not to be missed.