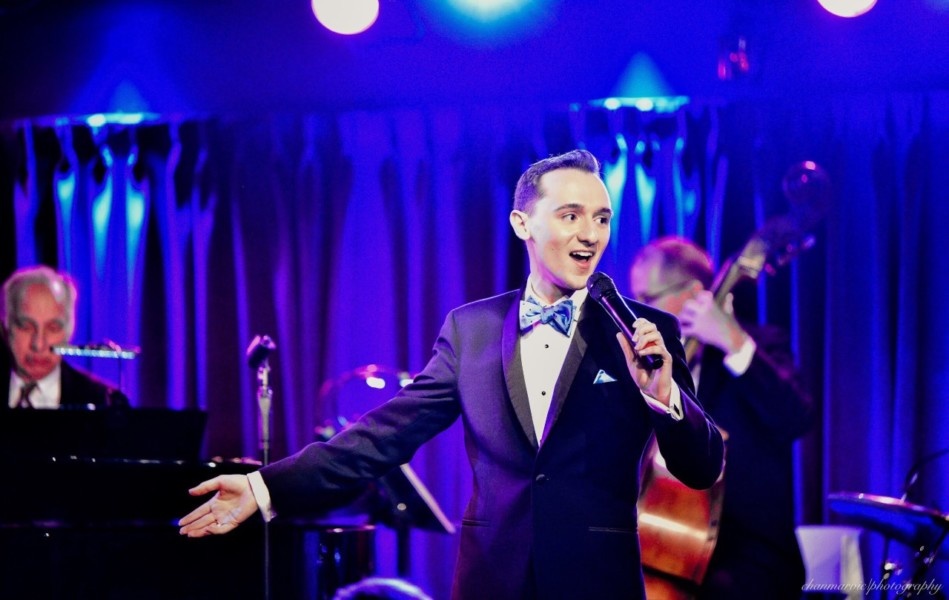 On Friday night, Charlie Romo, now 22 wow’d his audience at The Green Room 42. This young entertainer embodies the song stylings of Frank Sinatra, Dean Martin, Bobby Darin, Tony Bennett, Elvis Presley, Bing Crosby, Don McLean, Buddy Holly and Richie Valens. It is clear that Mr. Romo was born to be on stage. His stage presence and love of this era transfers to the audience. He is infectious with his charisma and warmth.

Romo’s show was a who’s who of the classic American songbook. “Mack The Knife,””Just In Time,” “Once Upon a Time”, “Let Me Try Again”, “What Kind of Fool Am I?,  blended with an emotional “American Pie,” “Chantilly Lace,” “That’ll Be The Day” and “La Bomba”. This young performer personality, patter and ease radiates with pitch-perfect technical mastery. Romo has an understanding of lyric, which makes his interpretation a joy to behold.

Joining Romo was another young talent, The Green Room’s own Kea Chan. Their duets on “Unforgettable” and “If I Ruled The World” were the highlight of the night. Their chemistry was a delight and Ms. Chan’s voice was thrilling. I am delighted to be introducing them both again on Monday night at The Hudson Theatre Guild.

Romo surrounded himself with some of the cities top musicians with musical director Jeff Harris on piano (Marilyn Maye, Maureen McGovern) Jack Cavari (guitarist for Shirley Bassey, Liza, Old Blue Eyes), Howie Gordan and Tom Hubbard on bass​. The musicality on that stage was stellar.

Romo is personable and has that elusive “It” factor. He was a finalist in the 2017 NYC MAC Award at 21, Best Male Debut Artist and the winner of Broadway World’s 2016 Best Debut Show at 20. What is so remarkable, is that each of the singers he emulates, not only does he capture their style, but adds his own brand of  showmanship, so that it is a perfect blend of the artist and his own personal  interpretation.

This was a one night event, but you can catch Charlie and Kea on Monday Night 3/11, at The Hudson Guild Theatre, 441 West 26th Street at 7pm in About an Evening of What Get Us Through Our Day. along with Robert Williams and this critic.

Stephen SorokoffJune 15, 2022
Read More
Scroll for more
Tap
Anne Carrere is Back With Paris! The Show
What’s Not To Like About Betsy Wolfe at Feinstein’s/ 54 Below