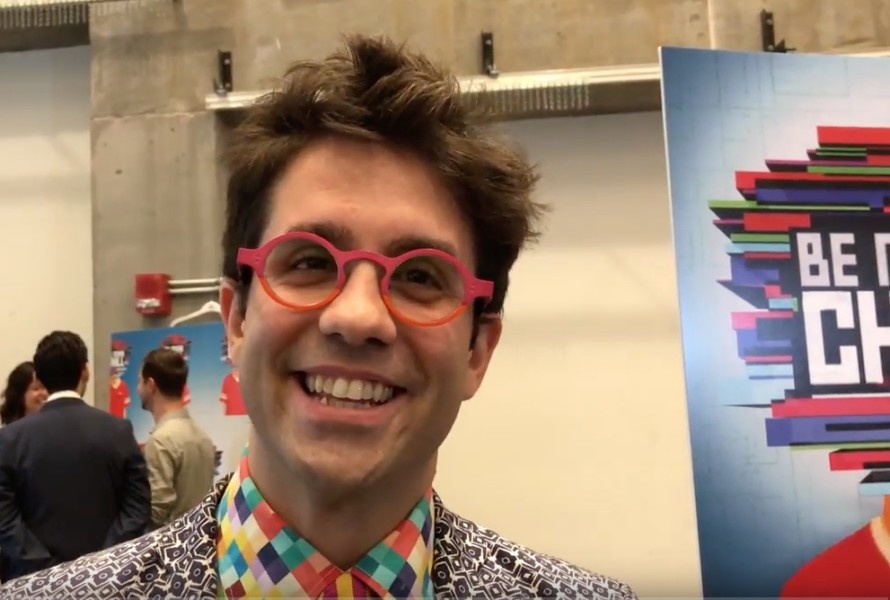 Suzanna Bowling
Chase Brock, the contemporary choreographer behind the Broadway-bound production Be More Chill and the Artistic Director of Brooklyn-based dance company The Chase Brock Experience, is thrilled to announce the world premiere of his newest creation, The Girl with the Alkaline Eyes. This evening-length dance narrative – the first Mr. Brock has created for his company – will play a strictly limited 17-performance engagement at New York City’s Theatre Row (410 West 42nd Street, Located between 9th & 10th Avenues) beginning Friday, December 28, 2018.
The Girl with the Alkaline Eyes is a futuristic A.I. thriller set in a high-tech lab where a young, hot-shot coder has been hard at work on a secret project: an extraordinarily lifelike creation who will change not only the life of his creator, but the lives of everyone around him. With a plot out of a binge-worthy Netflix drama, this unique dance-theater piece will feature performances by The Chase Brock Experience company members.
Set to an original, commissioned score by Eric Dietz, performed live on a double-trio of Piano/Roli Seaboard, violin and cello with pre-recorded electronics (including Siri), The Girl with the Alkaline Eyes will feature scenic design by Drama Desk nominee Jason Sherwood (The View Upstairs), costume design by Drama Desk nominee Loren Shaw (Restoration Comedy), lighting design by Drama Desk nominee Brian Tovar (Tamar of the River), and projection design by Mr. Brock’s Be More Chill collaborator Alex Basco Koch.
Tickets for the world premiere of The Girl with the Alkaline Eyes are available starting October 22 from $13.25. In addition, Premium Tickets will be available for $80.25-102.25 and will include VIP seat locations, a limited edition gift inspired by the show and a post-performance close-up look at elements from the show guided by a member of the company. Tickets can purchased online at www.telecharge.com, by phone at 212-239-6200 or at the Theatre Row Box Office.
A special 72-hour pre-sale offer of two standard admission tickets for $50 will be available to all members of The Chase Brock Experience e-mail list. Those interested in taking advantage of this special offer can sign-up for the email list at www.chasebrockexperience.com between today, Thursday, October 18 and Sunday, October 20 at 11:59pm.
The Girl with the Alkaline Eyes is made possible by a commissioning grant from The O’Donnell-Green Music and Dance Foundation and has been developed through a Resident Fellowship at The Center for Ballet and the Arts at NYU.
Theatre Row is a program of non-profit Building for the Arts NY, Inc. BFA presents vibrant arts initiatives to communities and neighborhoods, elevating people and places to serve their greatest purpose. www.bfany.org.
Founded in 2007, The Chase Brock Experience, called “peppy, poppy, amped up with theater geek zeal” in The New Yorker, is a Brooklyn-based dance company that has premiered 31 dances and seven commissioned scores in New York seasons at Joyce SoHo, Abrons Arts Center, Dance New Amsterdam, Baruch Performing Arts Center, The Connelly Theater and Theatre Row, as well in concert with The Pit Stop Players at Symphony Space. CBE has appeared in La MaMa Moves!, Hudson River Dance Festival, Fire Island Dance Festival, Hudson Valley Dance Festival, Downtown Dance Festival and Dance from the Heart, and at The Joyce Theater, Jacob’s Pillow, PS21 Chatham, 92Y, Broadway’s New Amsterdam Theatre and on tour from North Carolina to Maine. CBE has been in residence at Robert Wilson’s Watermill Center, The Orchard Project and Catskill Mountain Foundation. In addition, CBE created the dance numbers and served as the animation references for Ubisoft’s bestselling video game Dance on Broadway for Nintendo Wii and PlayStation Move. Chasing Dance, a documentary about the company by filmmakers Mathieu Mazza, Tracy Mazza and Stephanie Slewka, was nominated for two New England Emmy® Awards and is available on DVD.
Related ItemsBe More ChillChase BrockNewThe Chase Brock ExperienceThe Girl with the Alkaline Eyes
Dance

Stephen BestApril 7, 2022
Read More
Scroll for more
Tap
Nicholas Belton and Conor Ryan Talk To T2C About Their Involvement With Closer Than Ever
The McKittrick Masquerade Inferno is Back For Halloween