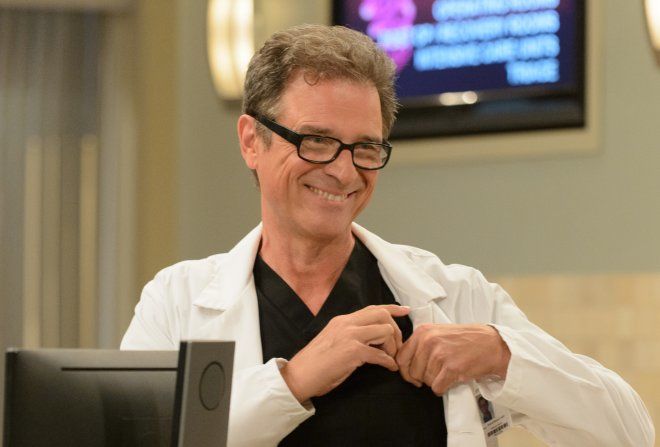 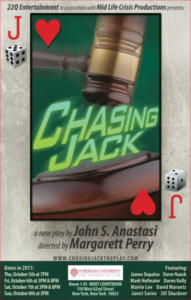 “Do you know why you don’t gamble with cash at the casino? The psychology behind the chips? You don’t think twice about throwing in a one hundred dollar chip but if you take a hundred bucks out of your wallet, that’s real money. Gambling in life is the same. It’s much easier to think of everyone and everything in your life as a chip. You assign a value to your wife, your child, job, and lover and then you can throw them away and stay detached. The problem is, detachment is not sustainable. “

John S. Anastasi new courtroom drama Chasing Jack is riveting, insightful and needs a longer production. Under the skillful direction of Margarett Perry, we follow Dr. Jack Chase (James DePaiva) a skillful surgeon, whose heart patient has died due to complications. The man in question was the husband of his head nurse, Rebecca (Arlene Bozich). Though passionate about being a heart surgeon, Jack is more passionate about his out of control gambling addiction. Through the lens of a malpractice lawsuit that could end his career, this mesmerizing play also explores the fine line between relationships. His estranged daughter Taylor (Mairin Lee, The Heiress), ends up defending her father, despite their past. His business partner (David Marantz) learns just how deep Jack’s medical ethics have been breached. Jack’s crippling addiction has left a trail of victims and just how many, you will not know until the end of the play.

This cast also consists of Steve Hauck (The Velocity of Autumn, Irena’s Vow), Max Hofmaier, Daren Kelly (Crazy For You, Deathtrap, Woman of the Year, South Pacific) and Janet Sarno (Dylan, Equus, Knockout, The Apple Doesn’t Fall, Fish in the Dark) is exemplary. I especially love Ms. Sarno as the judge, whose sarcastic, witty take on Mr. Anastasi words came out like a guttural purr.

As the lead James DePaiva, known for portraying Max Holden on the ABC Daytime soap opera “One Life to Live” and is currently playing Dr. Bensch on “General Hospital,” makes his mark. His connection to the part makes us follow his journey even though in a sense Jack is an unlikable person due to his manipulation. Mr. DePaiva, lets us see into the characters heart and soul. This is a layered performance that makes me want to see more of this talented actor on stage.

Margarett Perry, kept this play moving, keeping us engrossed in the action. This play is a rollercoaster of events and Ms. Perry kept us on our toes. I also want to highlight Leonardo Hidalgo’s lighting, which was quite brilliant given the space.

John S. Anastasi play is relevant and he was so smart to set this inside a real courtroom. I can see this drama playing all over the country and shedding insight into an addiction that is growing and destroying lives. With more than $500 billion being spent on wagers. Attention producers, this show is a no brainer at succeeding all over the country.

Chasing Jack: Gorman Moot Court at Fordham University, 150 West 62nd Street, Saturday, October 7 at 3pm & 8pm and Sunday, October 8 at 8pm. Audience members can get up close and personal next to their favorite soap star when they sit in the General Courtroom Gallery for $20 or get even closer in the Jury Box for $25 and be part of the action!