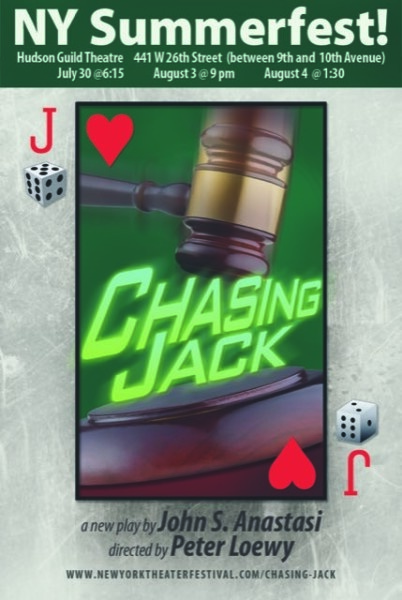 I first reviewed John S. Anastasi courtroom drama Chasing Jack in 2017. Originally it was actually performed in a court at Fordham University , starring James DePaiva from the soap opera “One Life To Live.”

Now the cast is non equity, the script has been paired down, is part of the NY Summerfest and surprisingly enough is even better.

The show is narrated by Dr. Jack Chase, a wonderful Patrick Hamilton. This skilled heart surgeon is in the fight for his life, as a malpractice lawsuit could end his career. Jack is being sued by his head nurse, Rebecca (Kelsy Lea Jones). We find out in the course of the show that Rebecca begged Dr. Chase to operate, but her husband died due to complications. His estranged daughter Taylor (Katy Wilson), winds up defending her father, despite their past, thanks to his business partner and fellow surgeon (Mike Meth).

In flashbacks and court room antics, we learn about Jack’s crippling gambling addiction, his dedication and obsession to his career and his medical ethics that have been breached. As secrets are revealed and plots laid out, this riveting, insightful and roller coaster of a ride is not done until the last card is drawn.

Mr. Hamilton, lets us see the flawed human being who fights his inner demons in Jack. We actually feel his journey and never second guess his next action, which leads to elements of surprise. This is an actor I want to see more of.

Ms. Wilson, is all ice and mater of fact. We completely understand how she got this way and our sympathies are with her all the way.

Ms. Jones is also a surprise and her transitions were flawless. She kept us guessing until the last minute.

Keeping the show light and adding a comedic aspect was Linda Browne as the judge with an attitude.

I was impressed with Peter Loewy’s direction and scenic design. When this show was in a court room I thought this was the perfect place to perform this drama, but this production proves that it really can play anywhere.