Check Out The Line-Up For Summer Stage 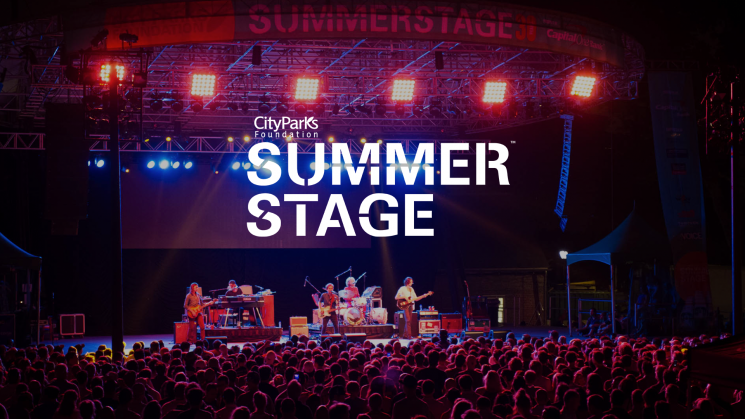 Check Out The Line-Up For Summer Stage

Capital One City Parks Foundation SummerStage is in full swing this month, with a diverse set of shows taking place in Central Park and across New York City. For the most up-to-date scheduling and lineup for all SummerStage programming, visit www.SummerStage.org for all festival information.

On Wednesday, August 14th, British soul singer Omar Lye-Fook will perform at MarcusGarveyPark in Manhattan. The son of Byron Lye-Fook, a studio musician and drummer who worked with the likes of Bob Marley and the Rolling Stones, Omar was classically trained at London’s Guildhall School of Music, and plays the trumpet, piano and percussion. Since his debut album There’s Nothing Like This (1990), he’s dabbled in ragga, hip-hop, funk, jazz-pop, rock, and Caribbean dance sounds. He’s joined by Nakhane, a London-based Xhosa polymath who has published a novel (Piggy Boy Blues) and acted in a feature film (Inxeba, or “The Wound”) in addition to his musical output. But it’s his music that soars highest, with an unmistakable voice that floats over experimental electro pop compositions with lyrics that-like much of his other work-tackle the subject of queer identity in conservative society, like his recent duet with ANOHNI, “New Brighton.” DJWildcat will open the show. This free show is set to take place from 7 to 9PM.

On Thursday, August15th, SummerStage will celebrate the 60th anniversary of the iconic Clark Center. This legendary showcase will uphold the mission of a space to cultivate emerging artists, with room for dancers and choreographers from every demographic to feel comfortable to create the work they want to make. Much of the all-star lineup has been around since the center first opened. PHILADANCO! The Philadelphia Dance Company, a nonprofit organization celebrated for its innovation, creativity and preservation of predominantly African-American traditions in dance, will make an appearance. Founded in 1970, PHILADANCO! has a legacy of breaking barriers and building bridges across cultural divides, consistently performing for audiences representing an amalgamation of people from diverse communities; 5Plus Ensemble features dancers 50 years of age and older, including former Ailey dancers, Hope Clarke and Michael Thomas; DyaneHarvey is a founding member of Forces of Nature Dance Theatre and award recipient, including multiple AUDELCO Awards as well as a recent nomination for Outstanding Revival for “HEX”, by Eleo Pomare at the 2019 Bessie Awards; JuelD. Lane has been a featured choreographer for Ailey II and had work commissioned by the Atlanta Ballet;AmyHallGarner has choreographed, coached, and worked as a creative consultant on projects such as Law & Order, and Chappelle’s Show, and teaches at New York University’s New Studio on Broadway at Tisch School of the Arts; and The HSADance Ensemble features young dancers from the Harlem School of The Arts, and led by former Ailey dancer, Aubrey Lynch. This free showcase is set to take place from 7 to 9PM at Marcus Garvey Park. A West African Dance Workshop with Nafisa Sharriff will take place at 7PM. No RSVP is required.

On Saturday, August17th, SummerStage will celebrate the 50th Anniversary of Black Woodstock in MarcusGarveyPark. Taking place in the summer of 1969, the original festival held a series of concerts in Mount Morris Park (now known as Marcus Garvey Park), to celebrate black pride, empowerment, music, and culture, and featured the likes of Stevie Wonder, Nina Simone, B.B. King, Sly & the Family Stone, Jesse Jackson, Gladys Knight and the Pips, Mahalia Jackson, and others. Curated by NealLudevig, a founder of the Harlem Arts Festival, the concert will feature musical direction by IgmarThomas (who has collaborated and led with the likes of Wyclef Jean, Mos Def, Esperanza Spalding, Lauryn Hill and Nas), and be co-hosted by TalibKweli, the fiercely independent MC known for his incisive, hard-hitting socially conscious raps. Jazz trumpeter and singer KeyonHarold (who has performed with Common, Snoop Dogg, Jay-Z, Beyonce, and Rihanna) will also perform, along with a number of surprise special guests. This free concert is set to take place from 6 to 9PM.

On Sunday, August 18th, a free Selena-themed outdoor concert, Selena for Sanctuary, will take place in CentralPark. The concert, hosted in support of immigration rights, was born of a series of benefit concerts in 2017 put together by artist manager and activist Doris Muñoz. This year’s party is headlined by KaliUchis, a Colombian-American singer with a critically acclaimed debut LP (2018’s Isolation) and collaborations with Gorillaz, Juanes and Daniel Caesar. She’s supported by Cuco, an ascendant Chicano bedroom pop star who is set to drop his debut album withInterscope after a prolonged bidding war; Ambar Lucid, an 18-year-old Dominican and Mexican-American singer-songwriter from New Jersey who writes bilingual tunes and wields finger-picked guitars and spaced out electronics with equal aplomb; HeladoNegro, a Brooklyn-based descendant of Ecuadorian immigrants who is known for his personal and political avant-pop music; IVJay, an R&B Latin prodigy who was recently signed to Atlantic Records; JasperBones, an up and coming Latinx artist;  PrincipeQ, a DJ and producer who spins R&B, hip-hop, dancehall, kuduro, and dembow; and the SantuarioHouseBand, led by music director AdrianQuesada. This free show is set to take place from 8 to 10PM. Doors open at 7PM.

Also on Sunday, August18th, The Wailers’ Julian Junior Marvin will perform in MarcusGarveyPark. Though the Wailers were first formed as a ska vocal group in 1963, they’re best known as the backing band of reggae legend Bob Marley. And it was that iteration that Julian Junior Marvin was asked to join in 1974 after the departure of founding members Peter Tosh and Bunny Wailer. His first recording with Bob Marley and the Wailers, Exodus, is widely considered one of the greatest albums of all time-in any genre. Since Marley’s death in 1981, Marvin has cut four records with the group, and toured with various iterations of the band’s lineup. Marvin fronts this current lineup, playing and singing the Bob Marley & The Wailers hits the way he believes Marley intended them to be heard. He’s joined by DJQueenMajesty, an NYC reggae selector with her own hot sauce empire. This free show is set to take place from 6 to 9PM. At 5PM, the CityParks PuppetMobile will present a free performance of their traveling show, Bessie’s Big Shot.

SummerStage at Ford Amphitheater at Coney Island continues on Sunday, August 18th, with a performance from LaSonora Ponceña (“The Ponce Sound”), one of New York’s longest running salsa bands. Formed in Ponce, Puerto Rico in 1954 by Enrique Lucca Caraballo and Antonio Santaella, the group has recorded 32 albums and is still going strong, now directed by Caraballo’s son Papo Lucca. The band is joined by Jose “El Canario” Alberto, the Dominican salsa vocalist who moved from Santo Domingo to Puerto Rico as a young boy and got his name (“The Canary”) on account of his virtuosic whistling ability. Alberto moved to New York in 1977 and got his break with Tipica ’73, going on to start his own band and collaborate with the likes of Sonny Bravo, Mario Rivera, and Leopoldo Pineda. They’re both supported by the Bronx’s DJLucho, a mentee of freestyle legend “Little” Louie Vega and DJ C. Devone. This free show is set to take place from 6 to 9PM. Doors open at 5PM.

CityParks SummerStage is New York City’s largest, free outdoor performing arts festival, taking place in Central Park and in 17 neighborhood parks around the city, from June-October, presenting approximately 100 performances – the majority of which are free of charge – for 250,000+ audiences annually.

A full lineup for this season can be found below. For the most up-to-date scheduling and lineup for all SummerStage programming, follow SummerStage via the social media handles below and visit www.SummerStage.org for all festival information.

In all of its programming and activities, City Parks Foundation partners with the New York City Department of Parks & Recreation to improve neighborhood parks and the communities they serve.