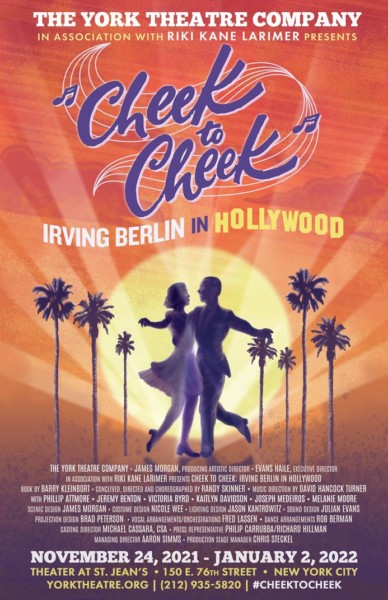 The world-premiere of Cheek To Cheek: Irving Berlin In Hollywood by the York Theatre Company is a delightful all -singing, all-dancing celebration of Irving Berlin and the songs he composed for the silver screen. Conceived, Choreographed, and Directed by Randy Skinner (42nd Street; Dames at Sea; Irving Berlin’s White Christmas; Ain’t Broadway Grand) you get exactly what you expect: lots of fabulous tap and an enjoyable evening at the theatre.

Barry Kleinbort (Book) and Skinner give us a glorious tribute to the legendary composer and lyricist that dazzles with songs you may not know and trivia galore. You are thrilled by Berlin’s silver screen melodies from 1927-65. He wrote an estimated 1,500 songs, including the scores for fifteen original Hollywood films. “Cheek to Cheek”, Now It Can Be Told.” “Change Partners,” “I Poured My Heart into a Song,” “You Keep Coming Back Like a Song,” and “Count Your Blessings” all earned Academy Award nominations. He won for “White Christmas” from Holiday Inn. He also won a Tony Award in 1951 for Best Score for the musical Call Me Madam and a special Tony Award in 1963. Through negotiations Berlin was the first composer to get top billing for the movies he scored.

The show features Phillip Attmore, Jeremy Benton, Victoria Byrd, Kaitlyn Davidson, Joseph Medeiros and Melanie Moore, who all but steals the show with her adorable eyes and lithe dancing. Kaitlyn Davidson delivers a song with the best of them. Her “Love, You Didn’t Do Right By Me” is soul wrenching. Attmore and Benton and shine in the tap dancing “My Walking Stick.” Benton and Moore shine as they glide effortlessly through “The Best Things Happen While You’re Dancing.”

“Blue Skies,” and “Let Yourself Go” along with many lesser-known pieces from The Jazz Singer, Top Hat, Alexander’s Ragtime Band, Holiday Inn, Easter Parade, and White Christmas are featured, but not the ones you expect.

A fact I did not know was Berlin created several dance crazes of the time, such as the energetic “The Piccolino,” “The Yam” and “Back to Back”. Ohh to be young and dance.

The show’s fabulous five-piece orchestra is led by music director David Hancock Turner on piano, Louis B. Crocco on drums/percussion, Noelle Rueschman and Amy Griffiths on reeds and Joseph Wallace on bass, who added to the syncopated rhythms. Kudos has to be given to vocal arranger and orchestrator Fred Lassen, and to the dance arrangements by Rob Berman.

The scenic design by James Morgan, with projections by Brad Peterson brought forth images of Berlin’s film posters, sheet music and those who made them famous like Al Jolson, Fred Astaire, Ginger Rogers, Bing Crosby and Danny Kaye gave us a grounding in the period. The lighting by Jason Kantrowitz and Ken Billington and the sound design by Julian Evans were also done extremely well.

The York has brought melody, entertainment and charmed with a brilliantly done homage to Irving Berlin. This is a gem of a show.

Cheek To Cheek: Irving Berlin In Hollywood: The Theatre at St. Jean’s, 150 East 76th Street, between Lexington and Third Avenue. Until January 2nd.