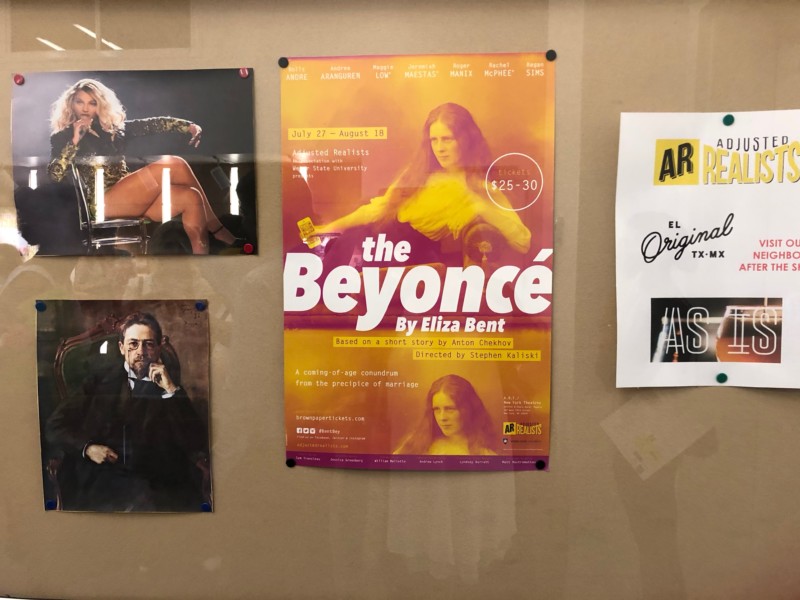 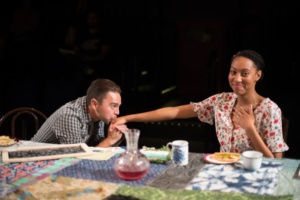 Over at the new A.R.T./New York Theatres, you can catch the Adjusted Realists’ production of The Beyoncé by Eliza Bent. This well-acted, modern take of the Anton Chekhov story “The Fiancée” finds Nadia (Regan Sims) living on her Grand Marfs (Maggie Low) estate with her self-absorbed mother, Nina (Rachel McPhee), and the maid, Consuelo (Andrea Aranguren). She is engaged to be married to Andre-Andre (Jeremiah Maestas), the son of a wealthy businessman (Rolls Andre). She is eagerly looking forward to the event and rather likes her fiancé: a pleasant but shallow, unmotivated man. However, she cannot seem to call him her fiancée but rather calls him her beyoncé. Enter Sasha (Roger Manix), who is on the liberal end of the spectrum. He questions the maids not getting paid enough, their having an estate, and their station in life even though Grand Marfs has paid his way. Sasha is vegan and finds money corruptible. He convinces Nadia to break off with her fiancé and the family to and go live the life she was meant to live. 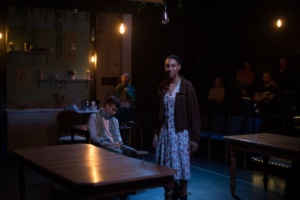 In the end, Sasha dies penniless and Nadia breaks all conventions and leaves, not caring that her family will suffer. She has discovered that her heart doesn’t want what it should want: a decent husband and a stable family life, but rather, a life of self-discovery. 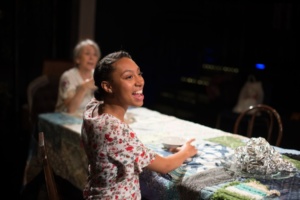 Ms. Sims is luminescent as she takes us on this journey. Ms. Aranguren delivers a monologue that is compelling. Ms. Low grounds the piece. Ms. McPhee adds just the right amount of melodramatics, as does Mr. Maestas who almost steals the show. Mr. Andre makes the most of a small role. Mr. Manix starts off hard to hear but grows on you and is perfectly cast.

Director Stephen Kaliski kept this show real, even though it is written at times in the first person as the actors state what they are thinking. In a strange way, it reminded me of Natasha, Pierre & The Great Comet of 1812.

The design team did wonders in this small space. I loved Sam Transleau’s Tuscan set, which was enhanced by Jessica Greenberg’s lighting. William Mellette’ s costumes put us in the right era and the sound design and original music by Andrew Lynch was a delight.

Ms. Bent’s work has a cadence that makes you think and ponder the balance between self and selfish. I have thought a lot about this subject since seeing this play. If you get a chance, go check out this profound piece of work.