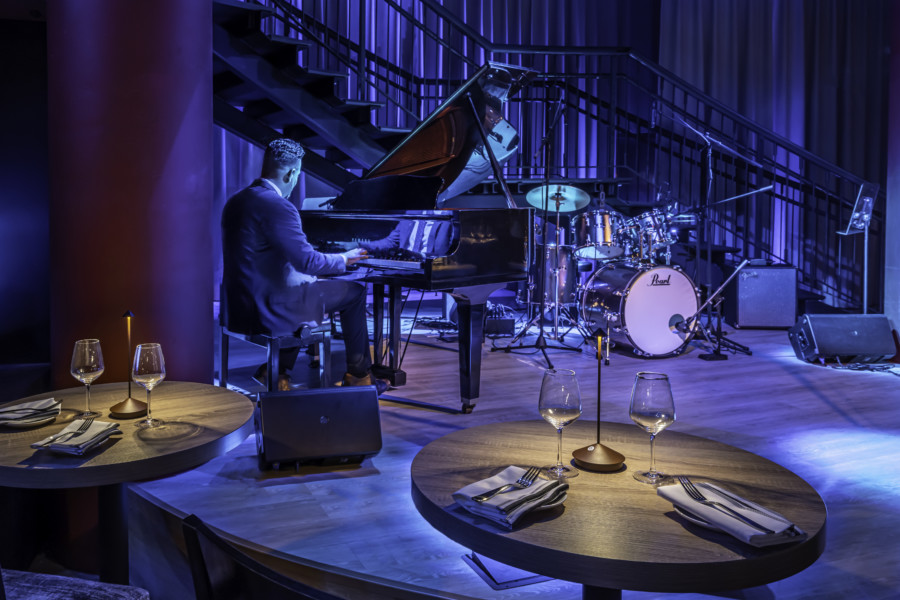 Chelsea Table + Stage offers New York its newest hotspot for intimate dining and wonderful music. Providing a wide variety of upscale American menu items, with distinguished wine and bespoke cocktails, audiences will experience some of the best touring performers in the world, alongside local emerging artists. Chelsea Table + Stagemelds the ambiance of a classic supper club with the acoustics of a serious listening room and a contemporary spin appealing to several generations of music lovers.

On alternate Sunday afternoons, the room presents its trademark Badass Brunch, which offers performances from Gotham Kings (October 10, December 5) and The High Standards Orchestra (October 24), with more to be added. No matter what the act, the brunch guarantees a rollicking good time.

Executive Chef Eric Purugganan has been in the culinary business for over 25 years. Born and raised in Alaska, he brings a well-rounded culinary repertoire to Chelsea Table + Stage. His passion for creating distinctive dishes began at an early age helping out with his family’s catering business and cooking with his father and uncle. Eric began his culinary journey through the Hawaiian Islands, starting on Kauai at Westin Ocean Resort Villas, then onto the renowned Merriman’s in Kapalua and Merriman’s Waimea. He attended the Western Culinary Institute in Portland, Oregon, where he worked at many notable restaurants and mentored under several of the city’s best chefs. Chef Eric is excited to bring his love for fish and seafood to the new menu.

Grace Kelly’s live performance is offering a unique musical journey and contagious exuberance on stage and will captivate audiences as she performs new songs from this new album GO TiME: Live in LA, her 13th album and the third video album in the “GO TiME” series. The new release continues her innovative video album concept for fans by incorporating special guests and adding her own inventive dance moves while playing. Performing her fresh, playful musical stylings with great panache, Grace’s infectious positivity and charismatic stage presence brings a smile to everyone.

Sophie and her powerhouse band will perform her new EP River Child. The album is an ambitious work of soul and roots-rock, but it’s Avidane’s lush storytelling, delivered by her timeless, powerful voice that keeps the listener hooked. Weaving in ballads and psychedelic rock covers with all of her River Child touches, makes Sophie’s debut at Chelsea Table + Stage an unmissable event. The NYC raised singer-songwriter calls upon influences of rock, folk, and soul, creating a unique texture showing her musical fluidity. River Child is produced by seven-time Grammy Award winner Commissioner Gordon Williams.

An evening of folk music by Billboard-charting singer/songwriter Gracie Terzian and her band, featuring violinist Audrey Hayes. Gracie is known for her poetic lyrics, haunting voice, and intense yet iridescent music, which features her unique and beautiful instrument: the harp ukulele. Get ready to hear her melodic and catchy original music, as well as some covers. Wall Street Journal music critic Terry Teachout says, “Gracie Terzian is a deep-dyed romantic who tells her tales of modern love with quiet delicacy and an inborn musicality that’s impossible to overlook.” Gracie has a popular YouTube channel with 35k+ subscribers where she performs original music, covers, and teaches music theory.

Thunderstorm Artis is a singer/songwriter born on the North Shore of Oahu in Hawaii. He learned at a young age to play piano, guitar, harmonica and drums. He has toured for many years with his brother Ron Artis II and has shared stages with Jack Johnson, Booker T, and Mike Love. However, he is most known for being a finalist on the NBC show “The Voice” Season 18. His music crosses many genres including folk, rock, soul and country. At his concerts, he has been known to jump into Bowie, Beatles, Elton John and Leonard Cohen, as well as mixing in his own heartfelt originals. No matter what Thunderstorm performs, he does it from his heart. He does not consider his music as notes on a page but rather a window into his soul.

A night of explosive Afro-Caribbean rhythms intertwined with modern harmonies will fill the air when rhythms of Puerto Rico, Cuba, Peru and other sacred places will take over your soul. The music from this Grammy Award-nominated group will take you on a musical journey with each song, melody and beat. Percussionist Wilson “Chembo” Corniel, Jr. studied music at The Harbor Conservatory for the Performing Arts in New York City, Pastore Music in New Jersey, and also attended La Escuela National de Arte (ENA) in Havana, Cuba under the direction of Chucho Valdez. Chembo received a Grammy nomination for “Best Latin Jazz Album” for his recording Things I Wanted To Do.

The Joe Pino Quintet is a high-energy straight ahead jazz quintet, featuring the group’s original compositions and many Bebop classics. Pino is a New York City-based trumpeter who has performed at some of the most elite jazz venues in the city, including the Blue Note, Club Bohemia, Jazz at Kitano, Swing 46 and The Supper Club. His extensive performance career has led him playing with the national Broadway tour of Woody Allen’s Bullets Over Broadway, Elf the Musical at Madison Square Garden, and with the multi Grammy-winning Reggae group Morgan Heritage at Central Park Summer Stage.

Oscar Hernández brings his Latin Jazz Quintet “Alma Libre” for a night of Clave on Jazz, featuring some of Latin music’s elite musicians. Oscar’s group has two albums out on Origen Records, performing his original compositions accompanied by an ensemble of accomplished musicians. The four-time Grammy Award winner is one of the most gifted and prominent pianist/arrangers on the contemporary Latin, Latin-Jazz and Salsa music scene. He has achieved legendary status for his prolific career spanning over 40 years. Throughout his career, he has collaborated with impressive list of artists as pianist, arranger, and producer. For 20 years he has been the leader of three-time Grammy-winning Spanish Harlem Orchestra.

The Abel Mireles Group brings a vast cultural background of professional musicians who have masterfully balanced and blended the often-contradictory poles of innovation and tradition in Jazz. The group is releasing their first album Animo, which draws from the traditional music style of his home country and jazz. The group brings integrity, energy, poise, and a fresh vision with his own compositions and arrangements. Abel joins efforts with pianist Benito Gonzales, drummer E.J. Strickland, and bassist Myles Sloniker to present a new perspective of the music informed by all of their cultural influences. Abel Mireles is a jazz saxophonist, bandleader, sideman, composer, arranger, educator, and producer, who was born and raised in the borderland of Juarez, Mexico. He has performed in New York City venues like Carnegie Hall, The Apollo, Dizzy’s Club, and City Winery. Also, recently appearing on national TV working for NBC under at “Showtime at the Apollo” and “Christmas at Rockefeller Center” working with artists such as John Legend, Brandy, Dionne Warwick, Paul Shaffer, and more.

A high-energy, sweet and spicy blend of country and pop that not only pleases the eye and ears, but travels right down to the soul, Jesslee skyrocketed to national recognition after turning both Blake Shelton’s and Kelly Clarkson’s chairs on NBC’s “The Voice.” Since then, Jesslee has shared the stage alongside notable artists including Wynonna Judd, Dierks Bentley, Thomas Rhett, Cole Swindell, Uncle Kracker, Cassadee Pope, and many others. Jesslee tours both in the United States and internationally, headlining and appearing on festivals in France, Spain, and Denmark, while playing the biggest main stages in the American country scene.

Steph Amoroso will deliver an unforgettable acoustic and electric set, featuring recently released singles “Keep Me in the Dark”, “You and Me”, as well as her summer hit “Electric Light”, featured in People, Good Housekeeping, and other major media. An old soul with a gravity beyond her years, Amoroso is a New York City-based, New Jersey-bred singer, songwriter, musician, and actor who boasts a soulful voice and magnetic presence. She was in cast of Punchdrunk’s Off Broadway hit Sleep No More, where she sang with the jazz band as her alter ego, Lola. Drawing inspiration from Joni Mitchell, The Beatles, Bruce Springsteen, and Madonna, Steph’s sense of freedom, passion for storytelling and theatrical flair, is threaded within the layers of her music.

Former “American Idol” finalist and powerhouse Elise Testone will perform as part of her current US Tour. Elise’s incredible voice will be showcased by soulful original tunes mixed in with music from Amy Winehouse, Led Zepplin, Jimi Hendrix, Michael Jackson, and James Brown. Her first original album, In This Life, celebrates her ability to “wail the blues, rock like a bitch and purr sexily” (Goldmine). Testone toured extensively and appeared on TV programs like “The Tonight Show,” “The Ellen DeGeneres Show,” and “Access Hollywood.” She has opened for B.B. King, Taj Mahal, and Snoop Dogg, and has performed with Stevie Nicks, Bernie Worrell, The James Brown Band; and members of Queen, Lynyrd Skynyrd, Ms. Lauryn Hill, Living Colour, Trey Anastasio Band, P-Funk, Galactic, Van Halen, and Snarky Puppy, to name a few. She has performed at venues such as The Cutting Room, The Blue Note, Irving Plaza, Brooklyn Bowl, and more.

A concert of the band’s newly expanded collection of unique jazz arrangements of songs of Earth Wind & Fire and Stevie Wonder. The quartet features Don Braden on tenor sax and flute, Art Hirahara on piano, Kenny Davis on bass, and Jeremy Warren on drums.

Join us for a one-of-a-kind performance, singer-songwriter Morgan Myles, who has opened for Rick Springfield, Travis Tritt, Reba McEntire, Luke Bryan and has been dubbed the female Chris Stapleton. She comes to New York City ready to belt her powerful voice on meaningful songs and debut her new single “Woman of My Word.”