Chess: A Musical I’ve Been Waiting For Decades to See Their Next Move

Chess: A Musical I’ve Been Waiting For Decades to See Their Next Move

Ross
In June of last year, Tim Rice (Evita, Jesus Christ Superstar), the incredible lyric and book writer of many of my favorite musicals, announced that after a recent successful table reading, the long-awaited revival of the musical, Chess, with music by Benny Anderson and Björn Ulvaeus (Mamma Mia!) would return to the Broadway stage for the first time since 1988. Way back in 1984, the musical began the game with the first move being a very successful concept album, and because of that success (the album was a Top 10 hit in the UK, West Germany and South Africa, reached #47 on the US Billboard 200, #39 in France, #35 in Australia, and was #1 on the Swedish charts for seven weeks, most likely due to ABBA’s Swedish heritage), made the strategic and daring move in 1986 to the West End. There it continued its winning streak by scoring numerous awards and three Olivier nominations including Best New Musical and nods for two of its leads. The wildly embraced musical game starred Eileen Page, Tommy Körberg, and Murray Head, and ran for over two years before, naturally making its way to New York City and the Broadway stage. 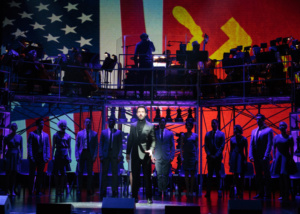 Suzanna BowlingJuly 28, 2022
Read More
Scroll for more
Tap
Deirdre O’Connell Fights The Ghosts From Her Past in Terminus
First Looks and Sounds of John Legend as Jesus