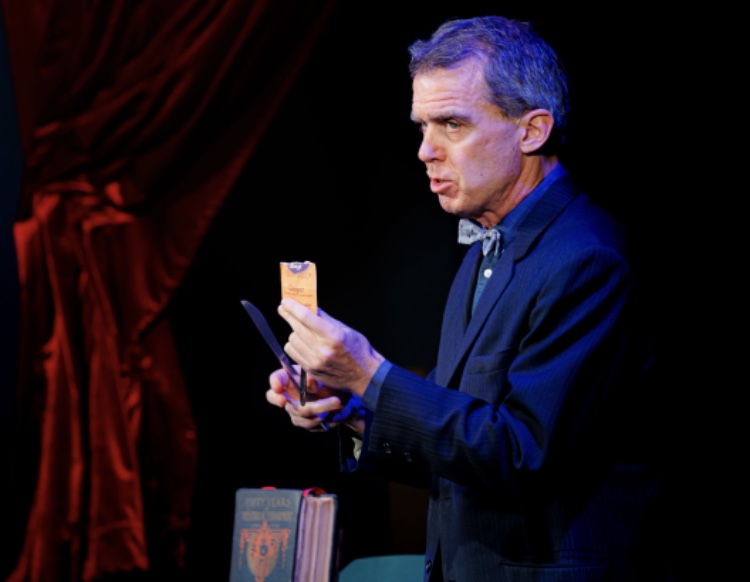 One of the real hidden gems in the Windy City’s entertainment scene is the Chicago Magic Lounge. This stunning Art Deco style theater is home to one of the most luxurious bars in the city and open seven nights a week. To enter, you must pass through the front area, cleverly disguised as a laundromat. This is to pay homage to the building before the CML team took over, renovated and redecorated. Turning the door’s handle you enter a posh palace, much like Dorothy leaving the banal black and white world of Kansas and stepping into the magical technicolor wonderful world of Oz. 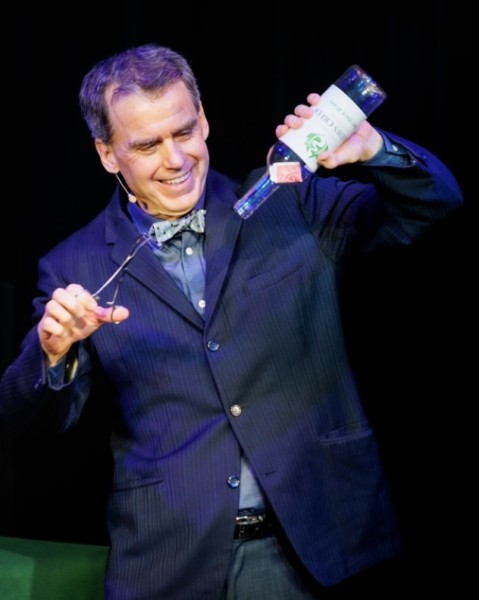 Once inside, the action is spread over three entertainment areas. The aforementioned 1930s-style speakeasy bar, the 110-seat Harry Blackstone Cabaret Theater and a formal back room, close-up gallery, The 654 Club. Did I forget to mention the Elegant Chicago Round Table Library? Home to a priceless collection of literature, props, memorabilia and artifacts celebrating the men and women who were the global superstars of the magic world at the turn of the century. It’s conveniently found right off of the main lobby. Enchanting, captivating, bewitching and all of this is before the show even started. 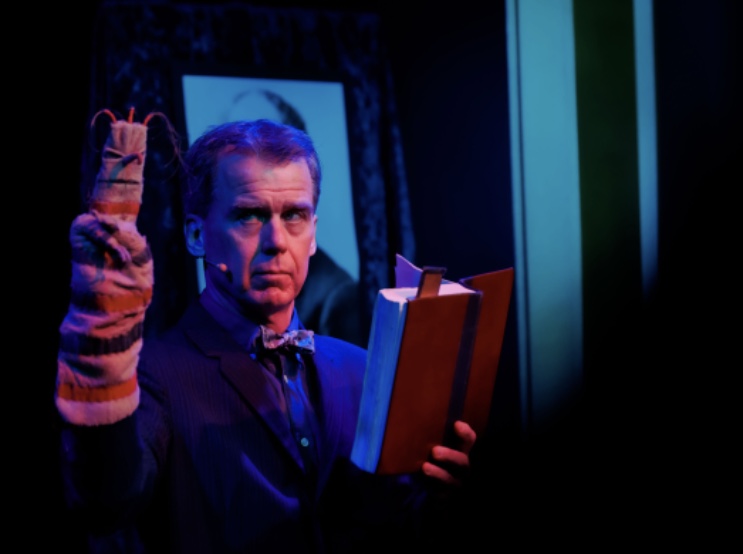 Speaking of shows, now appearing every Wednesday night until the end of June as part of their Artist-in-Residence series, the Chicago Magic Lounge proudly presents their lastest, Sean Masterson’s Message in a Bottle. Well known in the Chicagoland area, Masterson performs regularly at Theater Wit, The Music Box Theater, Shattered Globe Theater, The Actors Gymnasium and at the Old Town Art Fair. Well, hump-day is now the regular spot to catch his unique combination of sleight-of-hand wizardry combined with his mesmerizing story-telling. 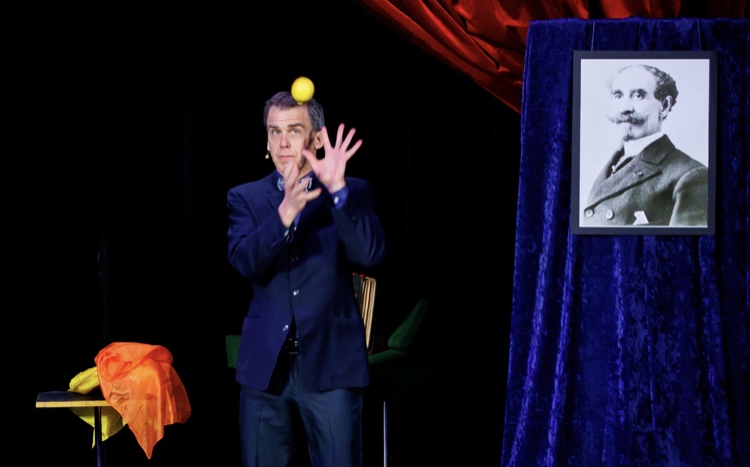 In-between mystifying vanishing knots, jumping knots & cut and restore rope tricks, Masterson chronicles the ages-old jealousy-fueled rivalry between magical greats, Alexander Herrmann and Harry Keller. If you are not familiar with these two 19th century superstars, you will be the end of his act. They had Harry Houdini level fame before Houdini was even out of grade-school. Just surrender to the numerous head-scratching “how does he do that” moments that pepper his act. This prestigious prestidigitator’s card tricks and ambitious illusions entertained an enthusiastic, if not befuddled, audience. Be forewarned, participation is absolutely required. 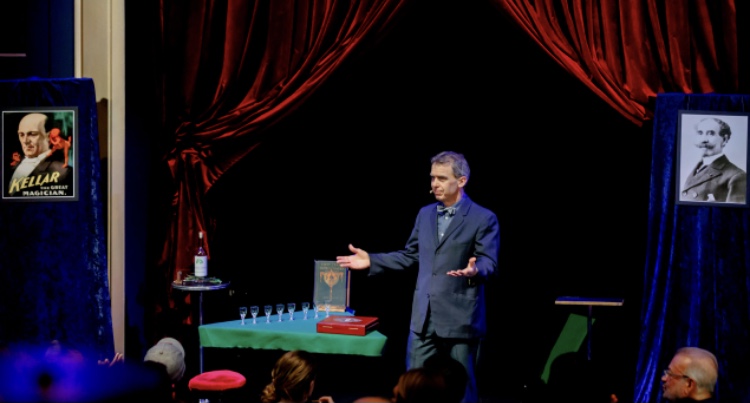 On top of this new weekly show, there is an array of House magicians that rotate nightly before the headliners appear. Our one-of-a-kind experience brought to life by a trio of tricksters, Paige Thompson, Deven Brown and Magic Sam. Never has the staple of magic, the up-close card and coin trick, been so delightfully confounding. This Chicago-style close-up magic happens while the patrons are comfortably in their seats. Using cards, coins and other familiar objects in sleight of hand fun while negotiating the intimate setting, the magicians do all the work. Jettison all skepticism & doubt and just sit back and enjoy the ride.

For many the Performance Bar is a regular neighborhood hideaway, open to the general public nightly. Tickets are not required to grab a cocktail or glass of wine. The luxurious seating, with capacity capped at 34 guests, adds to this lush and intimate experience. The renovations are truly stunning to behold. While sitting at the bar, you also have a front row to the complimentary floor show, with house magicians and guest entertainers working their wizardry between pours.

Speaking of pours, they have a full menu of signature cocktails aptly and thematically named, including the “Dark Arts”, “Smoke and Mirrors”, “Abracadabra” and the “Sleight of Hand”. Each made with an array of whiskeys, scotches, rums, tequilas and more. If wine is more your poison, Chicago Magic Lounge also offers a detectable wine menu, served by the glass or bottle. If you get the nibbles, the kitchen is open for a selection of mouthwatering appetizers, including their heralded herb salted French fries with truffle aioli, prosciutto wrapped dates, roasted olives or Farmers’ Market Crudites. For those with a sweet tooth, enjoy the s’mores with house-made graham crackers, salted caramel truffle ganache, bruleed vanilla bean marshmallow, dipped in bittersweet chocolate, the bonbon trio or the hand-dipped chocolate truffles.

The Chicago Magic Lounge truly is a one of kind experience. Part throwback to a nostalgic forgotten era of backroom prohibition pubs, part sentimental historic magician’s museum and all parts foreboding fun.

Marvel at the hocus-pocus. Become wide-eyed by the wizardry. Enjoy the impeccable illusionists. Just make certain to book your online reservations quickly. They sell out often and you only have until the end of June to catch the new Sean Masterson’s Message in a Bottle act before he, pardon the pun, disappears.

Magda KatzMay 24, 2022
Read More
Scroll for more
Tap
Six The Musical – Bow Down to the Queens of Six
Songs About Trains: A Celebration of Labor Through Folk Music That Needs More Structure