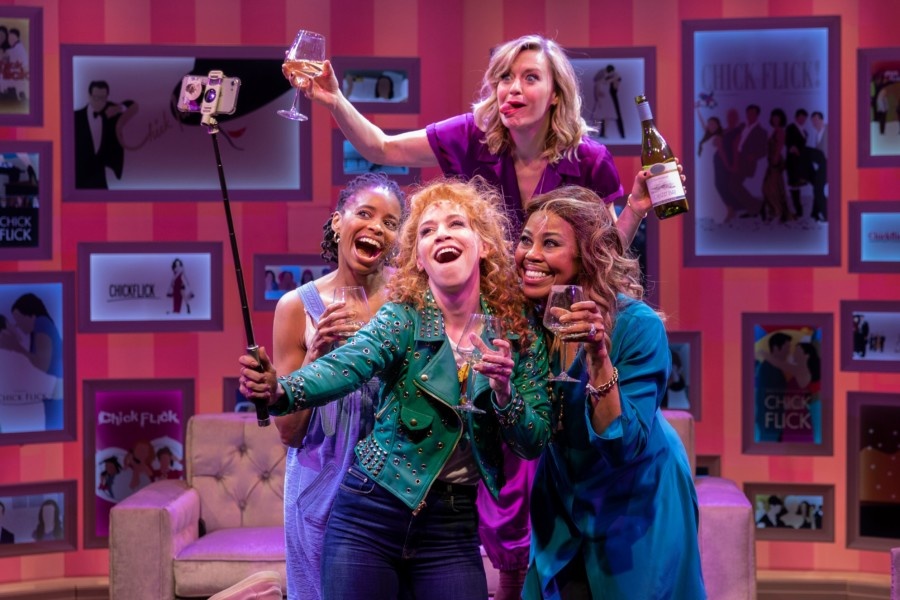 Chick Flick the Musical, which opened tonight at the Westside Theatre, claims to be “written by a woman, about women, for women,” but ironically is directed by a man. Book, music and lyric’s are by Susan Conn and I think maybe she could have used a partner to give her some perspective. Though there are some catchy, popish tunes, most of the melodies sound like other songs and there isn’t a clear sound to this show. It just sounds outdated and unforgettable.

The story is cliché, the women are stereotypes and outdated. First up is Karen (Sharon Catherine Brown) rich, unsatisfied, with a daughter who hates her and a heavy social calendar, to mask the fact her husband is never home. She gave up her dreams for her husband. She envies her best friend Dawn (Megan Sikora), an aging actress who’s claim to fame has been TV infomercials and now she can’t even get those. She sells beauty products on the side and to feel younger sleeps with boys half her age. She lies to her friends about her career and they think she is successful. Meg (Carla Duren), is a pastry chef who’s career is on the rise, as she keeps allowing her boyfriend to cheat and lie rather than let him go. Last, but not least is Shelia, a greeting card designer who’s need for love has her on the internet stalking to find her man. She needs a reality check, but hey you don’t need to have more than one date, before you get married….right?

The four women meet for a chick flick and chardonnay, but their lives and the plot seems more like a maudlin version, minus the romance. They use quotes from their favorite chick flicks to communicate, but that seems far and few between. The best part is when you are bored, Jason Shewood’s set gives you, your own game to entertain yourself with.

The actresses cast, pull off these cardboard cutouts by being endearing. Chambers, is a genius by twisting her dialogue and songs to get laughs and I liked her “From Meet Cute to Happy Ending”, even though I found the plot line implausible. My guest’s favorite moment was Sikora’s “Iced Seduction”.

David Ruttura’s direction, kept things moving as he steered the show on a fluid course.

What was good was the five-piece live band with music direction by Matt Castle.

Today is International Women’s Day and I just don’t see women flocking to see this. I think we are more evolved. We watch chick flicks because they are like a parallel universe we can escape to for just a few hours. We know the perfect man does not exists, but we still want to dream about him and believe for one moment, love will find a way.

Suzanna BowlingJanuary 18, 2023
Read More
Scroll for more
Tap
He Says: Fiddler on the Roof, In Yiddish, Sounds Crazy? No,… Not At All. It’s Actually A Blessing.
ACTUALLY WE’RE F**KED A Millennial Sitcom on Stage