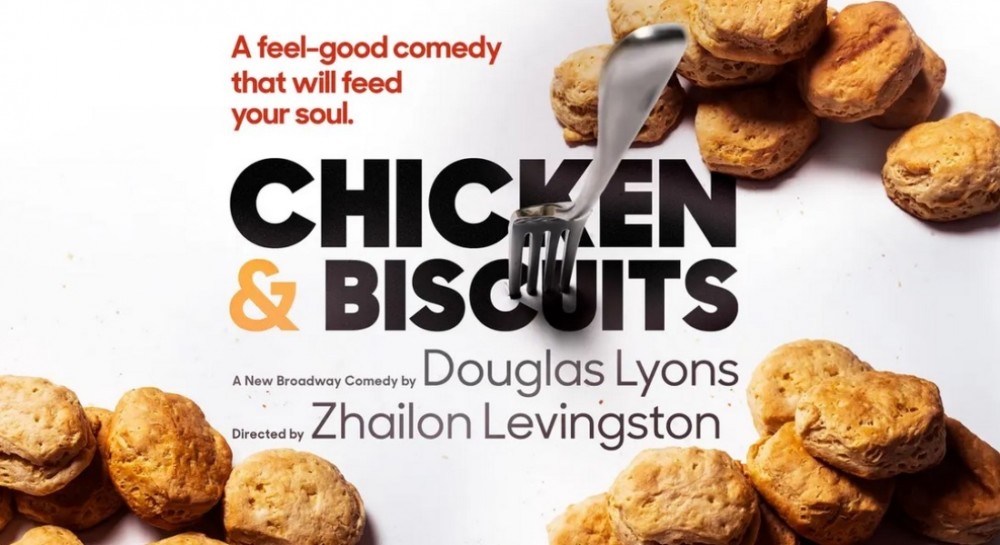 Chicken & Biscuits opened at Circle In The Square Theater today and it is not fully ready for primetime. The show has a cast of seven, five actors all making their Broadway debut, not to mention the director who is a newbie to Broadway as well.

The show has some really good things going for it, such as Michael Urie who commands the stage with “the business” he provides. His Jewish kvetch and his funny demeanor almost steals the show. Also able to fill out his role well is Norm Lewis… funny, stately and at times the voice of reason. He too takes charge in this production.

The well appointed costumes by Dede Ayite and the excellent glam lights of Adam Honore are well done. The night, however, was surely made enjoyable by sound designer TWI McCullum. His choice of themes at times made this ordinary at best, play funny and laughable.  The shows plot is all well and good, its problem is that many of the jokes, the facial expressions and what is about to happen next is all too predictable. An even moderate eye can see the aforementioned coming a mile away. The writer, director and most of the actors try too hard to make this show work.

Is the problem here because there are to many Broadway rookies?

I blame more of the shows problems on Zhailon Levingston, the director. He loses the show half way through and at two hours with no intermission it becomes tedious. Douglas Lyons, the shows writer has a good enough story; it is about family, how crazy they can be, how resentful family members can be, the jealousy and the pride. Lyons pits one side of the family, self righteous, a little uptight against the other side, more schemers than anything else. The two collide at their fathers funeral only to be shaken by what is reveled at the funeral, again the enlightenment was seen miles down the road before it happened. The added feature thrown in the mix is Kenny (Devere Rogers) and his boyfriend (Urie) that makes the night entertaining. Lyons deftly brings up the question of race… why Kenny only dates white guys and why his sister, Simone (Alana Raquel Bowers) only dates black guys and is that why she gets her heart ripped out repeatedly?

Even though the audience was overly generous in its laughter and applause, this show is mediocre. The jokes only land half the time. The acting at times is over done and the shows reach is too far and wide.

If you recall, this show was supposed to open in Queens before the pandemic.

Instead the not ready for prime time players tried to move on up like “The Jefferson’s” and fall short. In fact, this show reminds me of a television sit com with its plot, its form and flow.

In Chicken & Biscuits we are brought into this families life, we get to learn a little about the grandparents who are never seen on stage, we learn in a small way about every other character for two hours. At times we learn intimate things about each, but it is never thoroughly striking to the audience. After eighteen months of waiting the public is going to demand a show that most would give a C grade to. If re worked with stronger actors and a better director, “Chicken & Biscuits” would be more meaningful.

In the meantime, Lyons has thrown everything at this play (it’s about 20 to 30 minutes to long); the actors also throw everything at tis comedy and the director is under water trying to swim up stream.