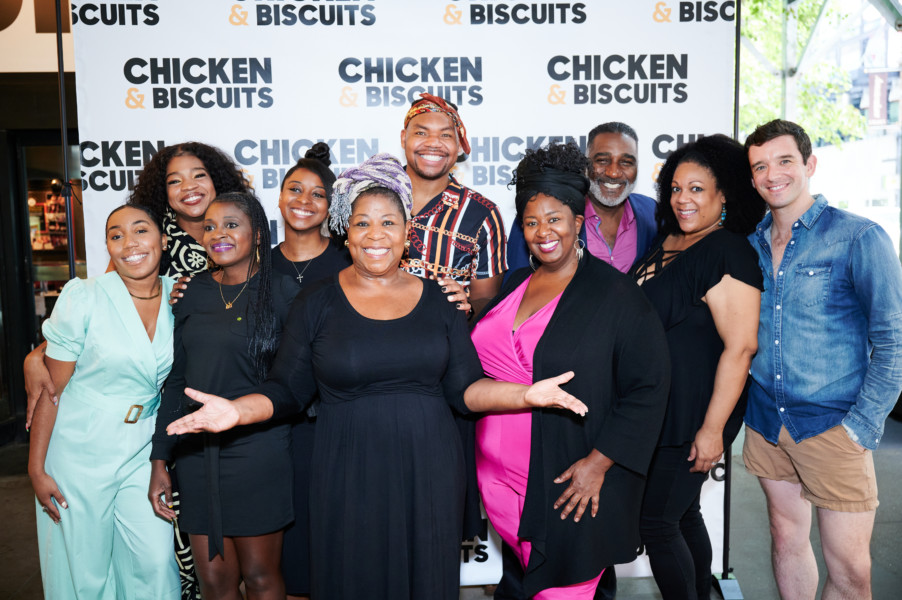 In celebration of moving into the theater & the incredible 32 Broadway debuts taking place on and off stage, the company of Chicken & Biscuits threw a picnic outside Circle In The Square Theatre with chicken and biscuits from Field Trip & Cheryl’s Global Soul.

Chicken & Biscuits will make its Broadway premiere this Thursday, September 23, 2021, with Opening Night set for Sunday, October 10, 2021, for a limited engagement through Sunday, January 2, 2022.

Devere Rogers (Up Here, “OK Boomer”) in his Broadway debut as Kenny Mabry.

Reprising their roles from the play’s world premiere at Queens Theatre, and making their Broadway stage debuts, are Ebony Marshall-Oliver (Merry Wives of Windsor and Ain’t No Mo’ at Public Theater) as Beverly Jenkins.

Alana Raquel Bowers (What to Send Up When it Goes Down) as Simone Mabry. Joining the company as understudies are Dean Acree (Words, Razors and the Wounded), Jennifer Fouché (Chicago National Tour) as the Baneatta Mabry standby, Michael Genet (The Prom), Miles G Jackson (Endlings) and Camille Upshaw (“That Damn Michael Che”).

The dynamic ensemble cast leads a raucous family comedy so full of laughter and love, it’ll leave you begging for seconds. The Jenkins family is coming together to celebrate the life of their father—hopefully without killing each other! Eldest daughter, Baneatta, wants everything to be perfect for her father’s funeral. “Favorite” daughter, Beverly, would rather honor her daddy dressed to show the entire congregation what she’s been “blessed with.” Teenage granddaughter, La’trice, can’t mind her own business if it was on a leash. Not far behind comes grandson Kenny and his very Jewish boyfriend Logan who is maybe, sort of, okay definitely afraid of Baneatta. But Baneatta’s hopes unravel when a family secret shows up at the funeral…