Children of Salt A Show To Look For At NYMF

Children of Salt A Show To Look For At NYMF 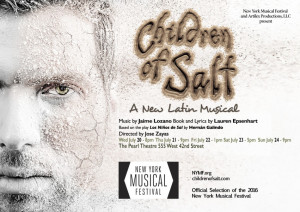 “Look back…but not got too long”

Inspired by the biblical anecdote of Lot’s wife, the moment she chose to look back at the crumbling village of Sodom and Gomorrah. The focal point of the piece is Raul, a successful entrepreneur who infrequently returns home, avoiding people, memories, and situations that sent him packing twenty years prior. Upon learning of his estranged grandmother’s illness, Raul again returns home to the beach, in hopes of leaving as quickly as possible. Throughout the day, a series of unexpected meetings, with old friends and a lost love, unleash a Pandora of memories, some beautiful, others consuming. Raul must learn from these memories in order to accept his present and move into his future. If he fails, he will remain one of the many ‘children of salt’ he struggled to leave behind years before. The musical is based on a Mexican play by Hernan Galindo and has book and lyrics by Lauren Epsenhart with Jaime Lozano as the composer and orchestrator.

Former Voice Star Christina Grime Has Been Shot Dead
Countdown to the Tony Awards: By The Numbers