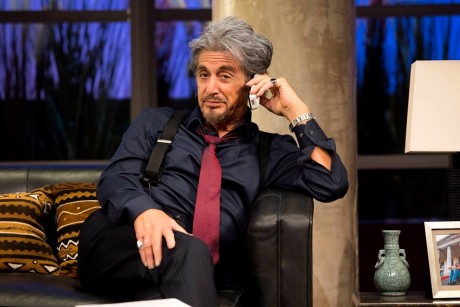 China Doll What Were They Thinking

China Doll What Were They Thinking 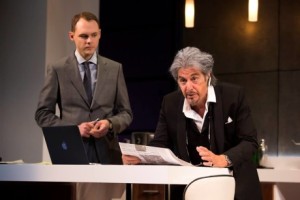 In watching David Mamet’s play China Doll, I just kept thinking why? Basically a two-hour monologue that goes nowhere, says nothing and keeps repeating itself. I found myself having a difficult time keeping my eyes open, as did the rest of the audience. If it weren’t so mind-boggling, I would of have laughed at audiences bobbing heads trying to pay attention, hoping for a moment of revelation.

Al Pacino does have the “it factor” and in a way I can’t blame him for this over the top incredible performance, as the play is just as implausible. The plot has Mickey Ross ie: Mr. Pacino on the phone most of the time talking to his attorney, his girl friend, the Governor of New York and others over the fact his newly bought plane has US tags instead of Swiss. The difference between that is $5 million in taxes. All of these by the way are one-sided conversations. We never hear the voice on the other line, which at least would have been interesting. In between this is his assistant Carson (Christopher Denham) who reacts and ads tidbits of information.

Al Pacino gives the audience what it has paid for. His range of theatrics is scaled into roar, sulk, pace, preen and everyone in a while he connects. He is like a circus animal going through his bag of tricks and they are impressive if a  movie star is what you want to see. If you have come to see a play and the characters it gives life to, you will be sorely disappointed.

Christopher Denham gives what he can in this thankless role.

As for Mr. Mamet, what were you broke? Did you get an advance for a play you were to suppose to deliver? Your plot makes NO SENSE. Couldn’t you have kept the play to ninety, ok sixty minutes and called it a day? Why not at least bring the girl in to give your play some life? Or give voice to the people on the phone? Honestly I do not get how this ever got produced let alone a space on Broadway.

Pam MacKinnon please pick better pieces to direct, you did what you could with this shell of a piece. Derek McLane your set is so much better than this show deserves.

If you’re an Al Pacino fan you will thrill no matter what I say, if you love theatre this play never gets off the ground.

Suzanna BowlingJanuary 22, 2023
Read More
Scroll for more
Tap
Is There Any Sanctuary From War?
The Peanuts Movie