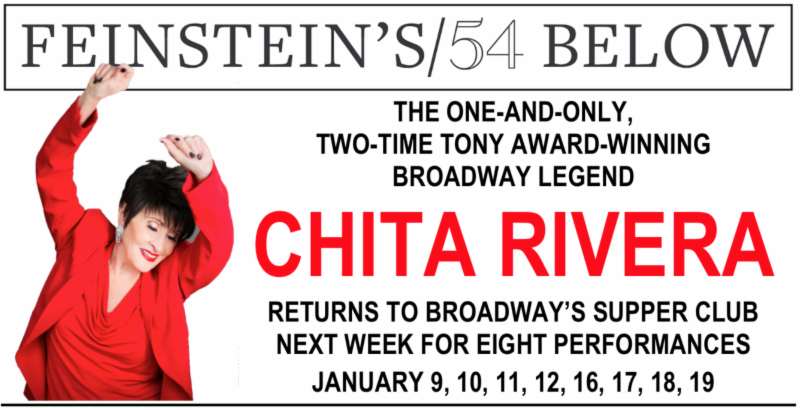 Chita Rivera Returns to Feinstein’s/54 Below

Chita Rivera Returns to Feinstein’s/54 Below

Suzanna Bowling
Back by popular demand, the two-time-Tony Award winning Broadway legend, Chita Rivera, returns to Feinstein’s/54 Below in her acclaimed solo concert for eight performances next week: January 9, 10, 11, 12, 16, 17, 18, 19 at 7PM. There is a $85 cover charge, and a $25 food and beverage minimum. Premium seating is available for $140-145. For reservations and information, visit https://54below.com/events/chita-rivera-2/.
An accomplished and versatile actress/singer/dancer, Chita Rivera has won two Tony Awards as Best Leading Actress in a Musical and received eight additional Tony nominations for an exceptional 10 Tony nominations. She recently starred in The Visit, the final John Kander/Fred Ebb/Terrence McNally musical directed by John Doyle and choreographed by Graciela Daniele on Broadway (2015), the Broadway revival of The Mystery of Edwin Drood, the Broadway and touring productions of The Dancer’s Life, a dazzling new musical celebrating her spectacular career, written by Terrence McNally and directed by Graciela Daniele and the revival of the Broadway musical Nine with Antonio Banderas. She trained as a ballerina (from age 11) before receiving a scholarship to the School of American Ballet from legendary George Balanchine. Chita’s first appearance (age 17) was as a principal dancer in Call Me Madam. Her electric performance as Anita in the original Broadway premiere of West Side Story brought her stardom, which she repeated in London. Her career is highlighted by starring roles in Bye Bye Birdie, The Rink (Tony Award), Chicago, Jerry’s Girls, Kiss of the Spider Woman (Tony Award), and the original Broadway casts of Guys and Dolls, Can-Can, Seventh Heaven  and Mr. Wonderful. On tour: Born Yesterday, The Rose Tattoo, Call Me Madam, Threepenny Opera, Sweet Charity, Kiss Me Kate, Zorba, Can-Can with The Rockettes. Chita was awarded The Presidential Medal of Freedom by President Barack Obama in 2009 and received the coveted Kennedy Center Honor in 2002. In November, 2016 she headlined at Carnegie Hall and in 2015, Great Performances aired their special Chita Rivera: A Lot of Livin’ To Do, a retrospective of her extraordinary life and career nationally on PBS. Chita’s current solo CD is entitled And Now I Swing. Chita is currently on a nationwide concert tour with Tommy Tune inChita & Tune: Just In Time. Her most treasured production is her daughter, singer/dancer/choreographer Lisa Mordente.
Feinstein’s/54 Below, Broadway’s Supper Club & Private Event Destination, is a performance venue in the grand tradition of New York City nightlife. A few blocks from the heart of Times Square and just below the legendary Studio 54, Feinstein’s/54 Below is a classically designed state-of-the art nightclub in the theatre district that hosts audiences with warmth and style. Feinstein’s/54 Below presents iconic and rising stars from the worlds of Broadway and popular music and has set a new standard for culinary excellence worthy of the world-class entertainment on the stage.  In their description of the venue, The New York Times writes, “Feinstein’s/54 Below has the intimacy of a large living room with unimpeded views and impeccable sound; there is not a bad seat in the house. Its sultry after-hours ambience is enhanced by brocade-patterned wall panels planted with orange-shaded lanterns. And the atmosphere is warmer and sexier than in Manhattan’s other major supper clubs.”  Located at 254 West 54th Street, Feinstein’s/54 Below features up to three shows nightly with cover charges ranging from $5- $105. www.54Below.com/Feinsteins
Related ItemsAnd Now I SwingBye Bye Birdie.Chita RiveraFeinstein’s/ 54 BelowKiss of the Spider WomanLisa MordenteNewThe RinkWest Side Story
Cabaret