Tarell Alvin McCraney’s (co-writer for the screenplay Moonlight, based on his play In Moonlight Black Boys Look Blue) Choir Boygrabs your heart and soul with the exquisite performance by Jeremy Pope. I expect several nominations for both this play and Pope. Choir Boy, produced by Manhattan Theatre Club at the Samuel J. Friedman Theatre, asks about morality, with themes of sexual identity, pride, shame, legacies, and duty at the heart of the matter.

Set in a prestigious prep school for African American boys, Pharus Jonathan Young (Pope) is singing his solo for the school’s graduation. Fellow choir boy, Bobby Marrow (J. Quinton Johnson), whispers a homophobic slur that stuns Pharus into silence, causing a confrontation with the school’s headmaster, Morrow (Chuck Cooper) who is Bobby’s uncle. Pharus’s personality is definitely over-the-top, and though he does not admit to being gay, we all know he is. Pharus is a match for the headmaster, who threatens to take his esteemed position of choir leader away when he will not squeal on his nephew. Instead, Pharus uses his newfound power to oust the troublesome Bobby from the choir. Not only is Pharus flamboyant, but he is vocally gifted and knows it. Bobby plans of revenge and the choir boys are forced to choose sides: A.J. (John Clay III), Pharus’s straight roommate, tries to help; Junior (Nicholas L. Ashe), Bobby’s best friend, sees more than he wants; and David (Caleb Eberhardt), a scholarship student, has a grasp on religion that masks his true personality. 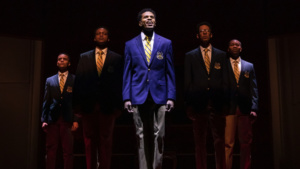 When Mr. Pendleton (played by Austin Pendleton), a highly regarded professor, comes out of retirement as a favor to the headmaster, he gets caught in the crossfire between Pharus and Bobby which speeds forward on a collision course. 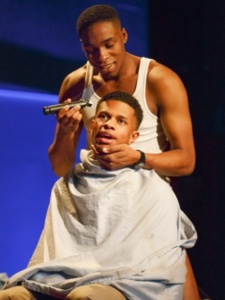 It is the plays quite moments, such as when Pharus calls his mom or A.J. comforts Pharus, that the show breaks your heart. 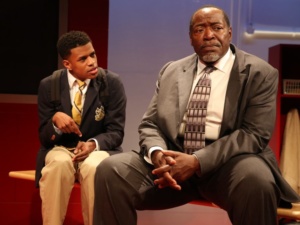 The cast is extremely effective and wonderfully talented. We know who each of these people are, but it is the charismatic Pope in his star-making role of Pharus that steals the stage and our hearts.

Trip Cullman’s direction keeps the show moving and unguessable as to its outcome. The a capella spirituals by Jason Michael Webb, the musical director who did the arrangements and supplied the original music, Fitz Patton’s original music and sound design, the choreography by Camille A. Brown, Peter Kaczorowski’s lighting and David Zinn’s sets all helped to bring a well-done show. 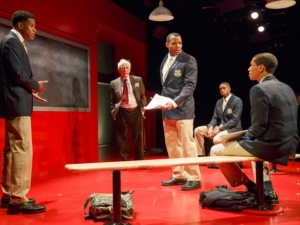 Tarell Alvin McCraney’s play, which was originally done in 2013 Off-Broadway, is inspiring and an emotional rollercoaster. I do think he sold out with his ending but was glad that the play did not go in either one of two directions I immediately thought it would go. I will think about this play for a while and consider it so far, the best play of the year and the best performance by an actor.