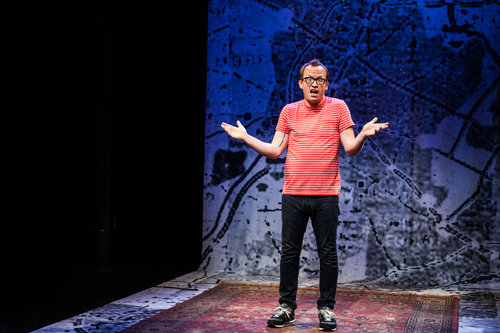 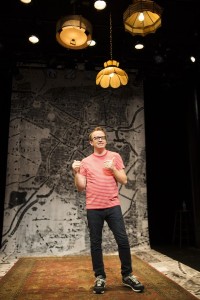 Chris Gethard’s new solo show, Career Suicide is neither funny nor theatre. It is a stand-up which would best be served at a comedy club, where 75-minute monologues do not go on for what seems like hours and are given a time constraint. Neither my companion, nor I found this remotely funny, though some of the 20 year olds and the immature 30 year olds were amused. I guess taking a high amount of drugs while performing at Bonnaroo is funny. Hearing about bouts of depression, alcoholism, OCD and anxiety, treated by an incompetent therapist, who enables these illnesses, is not funny. It’s sad and a little unpleasant. His therapist Barb, you see is blind to boundary issues and too free with her extraterrestrial theories of the human brain. 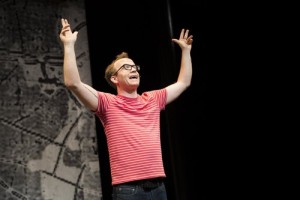 Semen that spurts like a leaky faucet is grossly disturbing, not amusing. Your were right Mr. Gethard, my side of the theatre was not laughing. Gethard’s show is intimate and explicit.

The problem with this show is we are in a strange way, asked to be Mr. Gethard’s enablers. He doesn’t create characters like Robin Williams or Lily Tomlin, he just tells his semi successful pathetic life. Boring!

Gethard for over 15 years has been hustling the comedy scene. He is starring in Mike Birbiglia’s film “Don’t Think Twice,” is the host of The Chris Gethard Show, a talk show on public access. He works largely out of Manhattan’s Upright Citizens Brigade Theatre. In 2010 he was in Variety magazine’s “Ten Comics to Watch.” From that he was cast in the short-lived Comedy Central sitcom, “Big Lake,” produced by. Will Ferrell and Adam McKay. Since then he has appeared on Late Night with Conan O’Brien, Hope and Faith and Comedy Central’s Crossballs.

Gethard, who is 36, hasn’t grown-up and his comedy reflects that. I can’t image this same monologue gathering enough of an audience every night for two months paying $48 for an unobstructed view to $78 for a cushy seat.